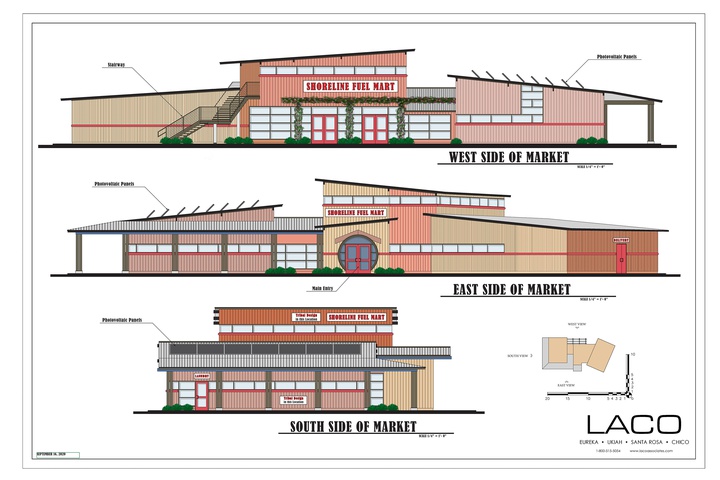 Conceptual art of the new Shoreline Market. Courtesy of the Yurok Tribe

The Yurok Tribe is the new owner of the Shoreline Deli and Market in Orick and plans to turn the facility into a fuel mart, laundry mat and tribal government office.

According to a tribal news release Thursday, the purchase and plans for revamping the 9-acre property comes after significant community engagement:

The Yurok Tribe recently acquired the Shoreline Market in Orick and will soon begin building a state-of-the-art fuel mart, laundry mat and tribal government office on the nine-acre property.

“This project is a win, win. In addition to providing important services to local residents, the business will produce new employment opportunities and serve as a source of revenue for tribal programs,” said Joseph L. James, the Chairman of the Yurok Tribe. “This acquisition also represents the recovery of a significant piece of land within our ancestral territory. Bringing this land back under tribal ownership is just as important as the financial gains it will generate.”

“The Yurok Tribe has engaged the Orick community at every stage of this endeavor and we are truly grateful for all of the support we have received. The people of Orick are just as enthusiastic as we are about the plans for this property,” added Sherri Provolt, the Orick District Representative on the Yurok Tribal Council. “Owning a modern fuel mart in proximity to one of the busiest parts of Redwood National and State Parks will benefit the Tribe in the present and in the long term.”

“The Orick community is excited about the Yurok Tribe’s plans to renovate, renew and rejuvenate this property. We are delighted that this new business will serve as the southern gateway into our community,” explained Donna Hufford, the Director of Orick Chamber of Commerce. “As a community organization, we thank the now former owners of the Shoreline Market for the excellent service they extended to local residents and the greater public.”

The economic development project will involve the construction of a two-story, approximately 6,000-square-foot building. The first floor of the partially solar-powered facility will house a minimart that will be filled with snacks, cold beverages and other convenient items. The laundry mat will also be on the ground level, but it will have a separate entrance. The second story will contain offices and two conference rooms. The US Highway 101-adjancent business will offer eight unleaded and high-flow diesel fuel pumps as well as multiple electric vehicle charging stations. Once complete, the conventional fuel dispensers and electric charging stations will be open 24 hours a day. During construction, the gas pumps will remain open for local residents and others because there is only one fueling station in Orick.

The town of Orick is named after a traditional village called Owr-rekw and is roughly in the center of the Tribe’s ancestral territory on the coast, which extends from the Little River in Humboldt County to Damnation Creek in Del Norte County. For millennia, Yurok people occupied the large village until they were forced out in the late 1800s. Several Yurok families, whose roots reach back to the original village of Owr-rekw, continue to live in Orick today.

“Orick has always been a wonderful place that has been significantly under appreciated. The community and the scenery are something special and I am excited to play a small part in revitalizing economic growth here. There are many beautiful things coming in the future for Orick,” said Toby Vanlandingham, who is the Vice President of the Yurok Economic Development Corporation’s Board of Directors and the Weitchpec District Representative on the Yurok Tribal Council.

The acquisition of the Shoreline Market is a critical component of the Tribe’s long-term plan to create jobs and a more resilient economy in the region, where a large majority of the 6,200-plus Yurok citizens reside. In the past two years, the Tribal Council has strategically invested in three new businesses within and outside of the Yurok Reservation. In 2019, the Tribe purchased the Mad River Brewing Company in Blue Lake, CA and is currently bringing the well-established brand to new markets. The Tribe recently acquired the Weitchpec Nursery, which will soon offer reservation residents all of the supplies needed to cultivate climate-specific vegetables and fruits. The property will also be the home base for a burgeoning food security program. The third business, Yurok Redwood Canoe Tours, was slated to open in May but the launch was delayed due to the COVID-19 pandemic. The one-of-a-kind Canoe Tours will commence in the spring of 2021, when the Tribe will be the first to provide the truly unique experience of travelling in hand-carved, traditional boats down a scenic stretch Klamath River on the Reservation.

In addition to the gas station in Orick, the Tribe owns the Pem-mey Fuel Mart in Klamath and the Pek-tah Fuel Mart in Weitchpec. The Tribe is also the proprietor of the following enterprises: Redwood Hotel Casino, Klamath Jet Boat Tours, Bluff Creek Resort, Redwood RV Park, Riverside RV Park, Requa Resort and other businesses.

In July of this year, the Tribe formed a historic agreement with the California Department of Parks and Recreation to operate the Stone Lagoon Visitor Center in Humboldt Lagoons State Park. The Visitor Center and the new facility in Orick will serve as excellent platforms to promote Yurok-affiliated and locally owned businesses along the redwood coast.

“We are extremely proud to be moving in such positive direction. The actions we are taking today will secure a brighter future for the next generation,” concluded Raymond Bacon, the Executive Director of the Yurok Economic Development Corporation.