With Measure S's Success, City Looks Toward Reopening Pool, But COVID Gets In The Way » 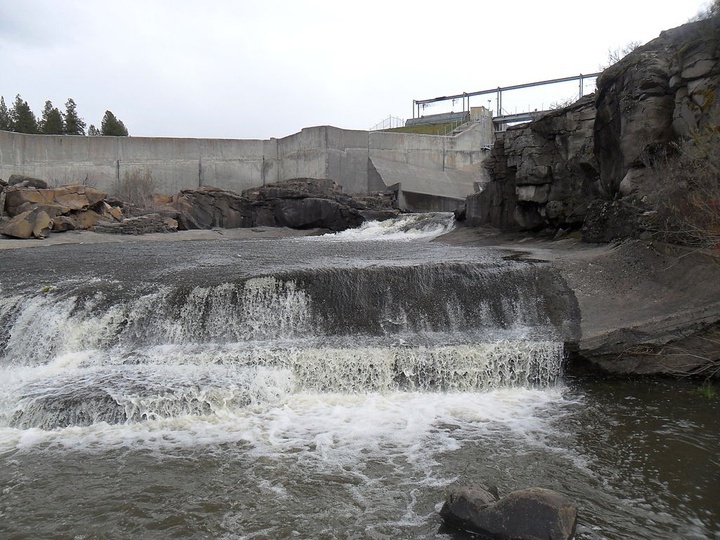 The J.C. Boyle Dam is one of four on the Klamath River slated for removal. Wikimedia Commons

Berkshire Hathaway’s PacifiCorp has signed onto a new agreement with Oregon, California, the Yurok and Karuk tribes paving the way forward toward Klamath River dam removal in 2023.

The memorandum of agreement advances the “most ambitious salmon restoration effort in history,” establishing the Klamath River Renewal Corporation as the entity in charge of removing four obsolete dams, California Department of Fish and Wildlife Director Charlton Bonham announced during an online event that included governors Gavin Newsom and Kate Brown as well as Yurok and Karuk tribal officials Tuesday.

The agreement retains the liability protections for PacifiCorp's customers that were established in 2016’s Klamath Hydroelectric Settlement Agreement, Bonham said, and advances the planning and permitting work needed to finish the project.

“As of today, actually probably while we’re speaking, we will be filing a license surrender application in front the Federal Energy Regulatory Commission, or FERC, which has jurisdiction over these dams,” Bonham said.

In January, the five parties in the settlement agreement will submit another application to FERC removing PacifiCorp from the project’s license and adding California, Oregon and the KRRC on as co-licensees to remove the dams.

“Adding the states in this role assures we have sufficient backing to get the settlement agreement done,” Bonham said. “It honors prior settlement terms in which PacifiCorp would not be a co-licensee for removal. It is entirely responsive to an order we have from FERC confirming the project but asking the question, ‘Is there sufficient backing?’”

According to a news release from KRRC, the parties also agreed to double available contingency funds. Oregon, California and PacifiCorp will share the costs equally to address FERC’s requirement that the project is fully funded.

Bonham said the project is on track to begin in 2022 with the JC Boyle, Copco 1, Copco 2 and Iron Gate Dams being removed in 2023. Restoration work will continue beyond 2023.

The new memorandum of agreement comes after FERC in July approved the partial transfer of the dams’ licenses from PacifiCorp to KRRC. PacifiCorp representatives argued that the decision changed the terms of the 2016 Hydroelectric Settlement Agreement, making the utility liable for all project costs and liabilities.

The agreement comes after months of pressure from tribes, conservationists, as well as Congressional leaders, according to a Tuesday news release from Congressman Jared Huffman. In August, Huffman questioned PacifiCorp’s representatives about the utility’s response to FERC’s order.

“I’ve been warning for months that a failure to keep Klamath dam removal on track would not only imperil the cultural and economically vital salmon fisheries on the river, but would irreparably damage Berkshire Hathaway and PacifiCorp’s reputations,” Huffman said. “It appears that message was received, and Warren Buffett has done the right thing to work with the Yurok and Karuk tribes and the states to get it done. The states’ efforts and willingness to take this on have been nothing short of remarkable.”

“I’m pleased to restate Berkshire Hathaway’s and PacifiCorp’s commitment to seeing the agreement fully implemented, including the removal of the dams, not just regarding the signing of the agreement,” Abel said. “We know the issue of removal of the dams is one of incredible importance to the tribes and is a matter of social, economic and racial justice.”

Joseph L. James, chairman of the Yurok Tribe, called the new agreement “a new day and a new era for California tribes.

“We're a natural resource tribe,” he said. “It is our duty and our oath to bring balance to the river. In this effort, we’re fulfilling that duty.”

James recognized the tribe’s “water warriors,” the activists that protested and “held the front lines” to fight for the Klamath River.

“He's here with me today,” James said of Fletcher.

Karuk Tribal Chairman Russel “Buster" Attebery also called the occasion a “special day,” noting that since the beginning of time his people have depended on the river's salmon, steelhead, sturgeon and eels for sustenance.

“My worst day is when I said there was no fish available for our tribal members, our elders, our children,” Attebury said. “I’m looking forward very much to having the best day as chairman of the Karuk Tribe when I can say, we have restored these fish and we can enjoy bonding times with our children when we can go to the river and we can put food on the table together.”