With Measure S's Success, City Looks Toward Reopening Pool, But COVID Gets In The Way 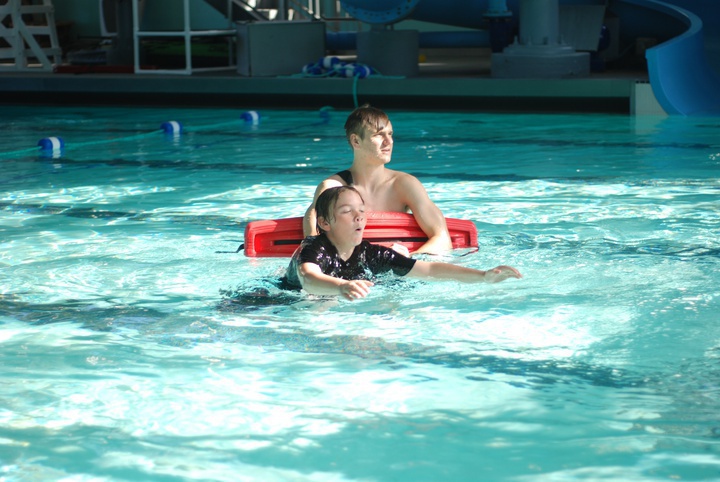 Measure S’s success provided a financial path for Crescent City Councilors to reopen the swimming pool, but COVID-19 has thrown up a road block.

Councilors on Monday authorized city staff to hire an aquatic supervisor who would be trained and become familiar with operations at the Fred Endert Municipal Swimming Pool. But a local spike in cases has moved Del Norte County into the red, or Substantial Tier, on California’s Blueprint for a Safer Economy means the pool must stay closed, City Manager Eric Wier said.

“These cases that we’re seeing now are just in the pipeline. We haven’t seen the end of this yet we don’t think,” he told Councilors. “Red for us means the pool cannot open.”

Wier had planned to ask Councilors if staff could dip into the general fund to begin heating the pool and hiring life guards knowing that the city would receive its first payment from the sales tax measure in June.

By the Council’s meeting, however, Public Health Officer Dr. Warren Rehwaldt announced that the county moved to the second highest tier on the Blueprint — subjecting local businesses to greater restrictions to slow transmission of the disease.

Rehwaldt further stated that he wasn’t confident an appeal to state health officials would prompt them to re-think Del Norte County’s position on the Blueprint due to spikes in COVID-19 cases both statewide and nationally.

These cases have been linked to family gatherings as well as an outbreak at Pelican Bay State Prison, Wier told Councilors on Monday.

There are currently two active COVID-19 cases among Pelican Bay State Prison inmates with one new case reported in the last 14 days, according to the California Department of Corrections and Rehabilitation’s Population Tracking web page. Twenty-one prison employees have tested positive for the novel coronavirus as well, according to CDCR.

The Crescent City Council closed the pool due on March 16 due to the COVID-19 pandemic. As the summer wore on, Councilors realized that not only would they have to keep the pool closed because of the pandemic, with an $800,000 budget deficit for the 2020-21 fiscal year, reopening it wasn’t financially feasible.

At about $370,000 a year, keeping the swimming pool closed made up the bulk of savings realized by several cuts to the general fund. Councilors and city staff put their energies toward a 1 percent sales tax measure — Measure S — that if successful, would generate $1.3 million to be used for emergency response, roads and keeping the pool sustainable.

About a month prior, Holly Wendt, the city’s recreation director, presented Councilors with a reopening plan for the pool during the COVID-19 pandemic, bringing back lap swimming, exercise programs, aerobics classes and swim lessons. But she advised them to wait on reopening the pool until voters weighed in on Measure S.

On Monday, Wendt said it would take about six weeks to hire and train new lifeguards. Staff had initially hoped to reopen the pool by mid January, according to Wendt’s presentation.

Though the Council is holding off on hiring lifeguards because of the spike in coronavirus cases, the aquatic supervisor position had been advertised before the pandemic started, Wendt said. Qualified individuals had already applied for the position, she said.

Eventually, the city would like to provide space for physical therapy as well as the Coast Maters Swim Team, Wendt said. These services would be by reservation only, she said, proposing to use the Sign Up Genius booking system that Arcata uses as its city pool.

Wier said though Measure S’s success is the “beacon of light at the end of the tunnel,” he advised the Council to wait on hiring more lifeguards. Following the COVID-induced pause, Wier said the Council would need to tackle temporary rates during the pandemic as well as long-term swimming pool rates.

Under state guidelines, small counties move into more restrictive levels on the Blueprint for a Safer Economy if they have 15 or more new novel coronavirus cases each week for two weeks in a row. Del Norte County had been in the orange, or moderate tier, up until a few days ago.

On Monday, Wier said if a small county’s COVID-19 case count suddenly sky rockets, the state could impose further restrictions. Siskiyou and Trinity counties, he said, had gone from the orange moderate tier to the purple, or widespread tier last week.

Wier, speculating that the recent uptick in COVID-19 cases may be a remnant of gatherings during Halloween, noted that with Thanksgiving, Christmas and New Years coming up, Del Norte County could be in the state’s second-most restrictive tier for some time.

“You have to spend at least three weeks in your tier,” Wier said. “So, we’re in red. We’ll be in red for a minimum of three weeks even if our numbers go down to yellow. My understanding is we can only go down one tier at a time. All have implications as we move forward especially with the pool.”

Wier recommended the Council approve the aquatic supervisor hire, but take the “pause” to understand what the tiers and metrics mean. He said having all the resources in place at the pool would cost the city about $40,000 to $45,000 a month.

Noting that the swimming pool can’t open during the current public health situation, Councilor Alex Fallman suggested he and his colleagues wait on making a decision.

“Measure S just passed,” he said. “We don’t know what the budget will be like. I’m not anxious to get the pool open now.”

Mayor Pro Tem Heidi Kime said though she wanted to hire the aquatic supervisor, she favors taking a measured approach to hiring lifeguards.

Crescent City Mayor Blake Inscore, who spoke with Rehwaldt on Monday, said he’s not opposed to hiring the aquatic supervisor, but he didn’t want to move quickly when it came to reopening the pool. He said he didn’t anticipate many changes by the Council’s first meeting in December.

Noting that the city spending $40,000 on a full swimming pool staff and then not being able to reopen would be fiscally irresponsible, Inscore suggested waiting before implementing a reopening strategy.

“I just think we need to wait until January on a lifeguard and implementation piece,” Inscore said. “I don’t think there’s anything wrong with an update. I think we need to face reality that the better thing to do would be to get an aquatic supervisor on board and if they’re not going to be on board until sometime in December, focus on the target date of sometime in January. Bringing (lifeguards) on without a supervisor doesn’t make a whole lot of sense either.”

Councilor Isaiah Wright, a teacher with Del Norte Unified School District, noted that kids are also going to be on winter break and could be traveling out of the area.

“We probably shouldn’t have a date any sooner than two weeks after that,” Wright said, referring to reopening the pool. “The problem with opening before then too is a lot of people are going to be traveling and you have an incubation period and we’ll probably see an uptick.”