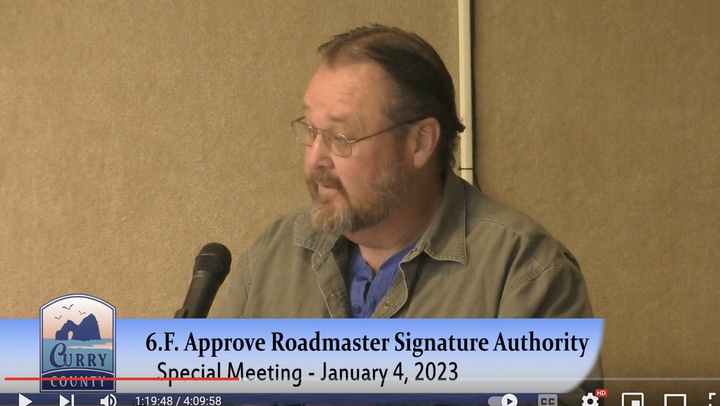 Curry County commissioners told the head of their road department to return a Sewer Water System TV camera he had purchased to inspect storm drains after their legal advisor raised concerns that the equipment opened the county to a “potentially ruinous” lawsuit.

Roadmaster Richard Christensen had approached the Board on Wednesday, requesting to purchase a $29,580.33 trailer after spending $187,000 on the camera system only to find the county didn’t have a way to get it into the field.

County Counsel Ted Fitzgerald put the kibosh on Christensen’s request, saying the roadmaster’s desire to turn a reactive practice into a proactive program was a significant policy change.

“If you need to have inspections done, they should be done in a limited scope in keeping with your plan and your budget,” Fitzgerald told Christensen. “This is a big change. If you want to make that change, then go ahead, but I predict a very bad outcome for the road fund.”

The county’s Road Reserve Fund has about $25 million in it currently, according to Commissioner John Herzog. It has historically been used to help balance the county’s overall budget.

Commissioners voted 2-0-1 on a motion to have Christensen send the camera back to the seller and recover its costs. Court Boice abstained, saying he wanted to get more information from Fitzgerald about his concerns.

The newest commissioner on the Board, Brad Alcorn, said he likely wouldn’t have approved the camera’s purchase in the first place due to its $187,000 price tag and was concerned about the potential liability issues.

“It’s kind of like a cop that stands behind a car and tells the driver to stop and then the driver backs up and the cop shoots and kills him,” Alcorn said about Fitzgerald’s concerns. “He’s created his own exigency by doing that when he just had to get out of the way.”

According to Christensen, after purchasing the camera a few months ago, he had planned to use an ambulance from Cal-Ore Life Flight to transport it. However the camera wouldn’t clear the vehicle’s doors and the inverter wasn’t powerful enough to run it. Christensen, who also included a quote for a RapidView van that was well over $100,000, said he was currently “stuck with no way of operating this equipment.”

With roughly 33 miles of storm drain in Curry County, Christensen said he was trying to control costs by creating a more proactive storm drain maintenance program instead of waiting until something breaks before repairing it.

While Brookings has a sewer line camera and the Oregon Department of Transportation has a camera it uses to inspect storm drains, Christensen said they couldn’t pinpoint the exact location of a problem. Christensen said his Road Department team liked SWS’s equipment because of its accuracy.

“My goal is to get the entire system TVed as soon as possible so we could put the information into some type of repair program or into the masterplan,” Christensen said. “The thing I fear is a big storm comes and it blows out a storm drain and floods a whole neighborhood or blows down a house or a school or something. And the state asks me, ‘Hey, when was the last time you inspected that?’ And I say, ‘I don’t know. We own it and we don’t have enough money to pay for that.’”

Christensen said the county has control over pipes and culverts. He also referred to a storm event in Brookings and brought up CIS, the insurance service founded by the Oregon League of Cities and Association of Oregon Counties.

“Disasters can happen, but if you didn’t do any preventative maintenance or documentation that you were working on mitigating the issue, then you are at fault,” Christensen told commissioners. “But if you identify problems and you don’t have any money, but you are working on trying to find grants and there is a disaster, you have done your due diligence.”

Fitzgerald disagreed, stating that his goal is to keep the county from being sued.

“Getting yourself into a grant situation is not due diligence,” he said. “When you have money sitting in the Road (Reserve) Fund, you will spend that money or you will be liable. If you have money and you prefer not to spend that money ‘cause you’re looking for grants and that’s the way we’re going… that’s why I said it would be ruinous for the Road Fund. You’ll end up paying it all out to one claimant.”

Fitzgerald also said CIS’s interest, as an insurance company, is adverse and not aligned with Curry County’s interest. He said he didn’t want to defer to a third party.