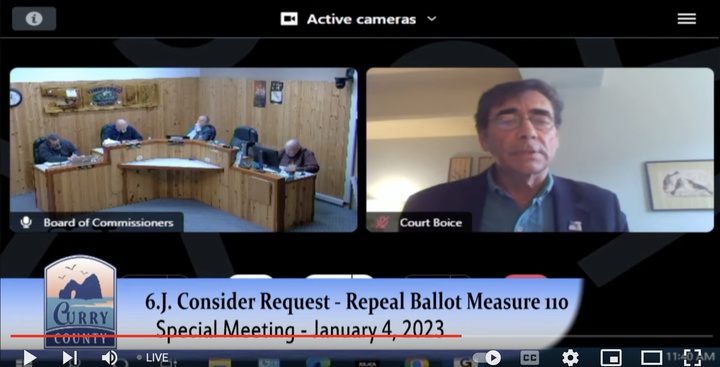 Participating in Wednesday's meeting via Zoom, Boice urged his colleagues to consider approaching the state legislature and Gov. Tina Kotek with their concerns.

Since the treatment and recovery services money Measure 110 promised was to be financed with tax revenue from marijuana sales, Boice also rattled off statistics about its effects on children that he said he gleaned from the Richmond, Oregon-based organization, CLEAR Alliance.

Boice referred to a 2012 study he said his colleagues could Google that stated marijuana can “permanently reduce” an adolescent’s IQ by as much as eight points and that it exacerbates depression, anxiety and suicidal thoughts in adolescents.

“My proposal is to have this Board be a leader within the state that basically says, ‘Measure 110 is not the answer,’” Boice said. “I’m not saying it’s backfired, but it’s not managed well and the money’s not coming back to the county. The consequences are more and more people being without treatment, and you know what comes after that. What it means to the quality of life, tourism promotion — every aspect — schools; all of the above.”

Approved by Oregonians in 2020 — Boice said it voters approved the measure in 2015 — Measure 110, also known as the Oregon Drug Addiction Treatment and Recovery Act, reclassified possessing a controlled substance such as heroin, cocaine and methamphetamine as a Class E violation. Those caught possessing illegal drugs are fined $100 or are ordered to complete a health assessment conducted through an addiction recovery center, according to Ballotpedia.

The measure also required the Oregon Health Authority to establish a treatment and recovery services fund financed with marijuana tax revenue that would pay for Addiction Recovery Centers as well as grants, according to Boice’s staff report. The OHA was to have established 15 addiction recovery centers statewide by Oct. 1, 2021 as well as create a grant program that would increase patients’ access to community-based services.

In 2021, $22.3 million in “Access to Care” grants was awarded to 70 organizations statewide. These dollars can be used for services like treatment, housing, peer support and harm reduction, according to the Oregon Health Authority.

According to the state’s Measure 110 Behavioral Health Resource Network Dashboard, Curry County’s grant allocation is about $1.562 million. To date, organizations in the county, including Adapt and Brookings CORE Response and Adapt Integrated Healthcare, have received $781,234 in grants, according to the dashboard.

In his presentation to the Board of Commissioners on Wednesday, Boice said $500 million was set aside to pay for the Addiction Recovery Centers and Curry County’s share was $2 million to $3 million for “drug rehab and doing our part.”

“We’re going to have to vigorously compete for our part of that half million and sustain that into long-term funding,” Boice said.

Curry County’s newest commissioner, Brad Alcorn, drew on his experience as a police officer and said while he agreed with Boice, the Board may want to advocate for funding for better law enforcement.

Selling and trafficking drugs and conspiracy to sell drugs are still high level felonies, Alcorn said, but there’s no proactive law enforcement in Curry County to conduct those investigations.

“When a citizen of Curry calls law enforcement and says, ‘Hey, my neighbor is selling a ton of drugs. It’s like a drive-thru at night, there’s people fighting and I hear gunshots and this is an escalating problem,’ they’re going to get a law enforcement response, and it’s going to be the best that our agencies can do,” Alcorn said. “That’s going to be a uniformed police officer, and what can he do? He doesn’t have access to technology to conduct surveillance to develop probable cause to issue search warrants (for) and so on. We don’t have those resources.”

Alcorn, who is set to attend the Association of Oregon Counties’ County College later this month, said there may be some discussion about Measure 110 and the need for better drug enforcement at that event.