Transit Hub Will Be Near Library Parking Lot, City Councilors, RCTA Board Decide 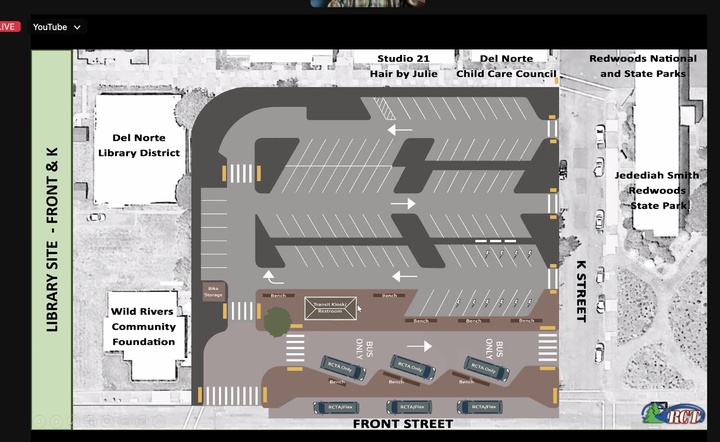 The option RCTA and Crescent City representatives went with has more of an economic benefit, councilors argued. | Courtesy Green Dot

Crescent City Councilors convinced Redwood Coast Transit Authority directors that the parking lot near the library was a good home for a future transit center.

Councilors on Monday argued that a second option, another city parking lot on Front Street about two blocks over — initially, the transit authority board’s preferred site — might be better served for commercial and residential use.

Having a transit center in the parking lot at Front and K streets could be an economic benefit to the community. City staff and elected officials envisioned partnerships with Redwood National and State Park, whose headquarters is across the street. They also discussed the location’s easy access to future amenities at Beachfront Park such as the new “all-inclusive playground area” and Tolowa Interpretive Trail.

“I’m tired of living in a community where we settled because somebody says we can’t,” he said. “We’ve seen some ‘I cans’ happen in the last several years in our community and we as elected officials need to start thinking, ‘Why not us?’”

Members of both governing bodies unanimously chose the 1.75 acre parking lot near the Del Norte County Library as the site for a Redwood Coast Transit Authority transportation center. The next step is for both agencies to create a memorandum of agreement that outlines when the center would be staffed, who would be responsible for its maintenance, who’d own the building and any potential leasing costs.

RCTA began planning for a regional transit hub about three to four years ago when it was conducting its short-range transit plan, Manager Joe Rye said. Riders were worried about safety and security at the current transportation hub near the Cultural Center.

It was important to not only have access to staff to disseminate information, but have someone available for the public to talk to or if they were in trouble to “keep another set of eyes on the situation,” Rye said. 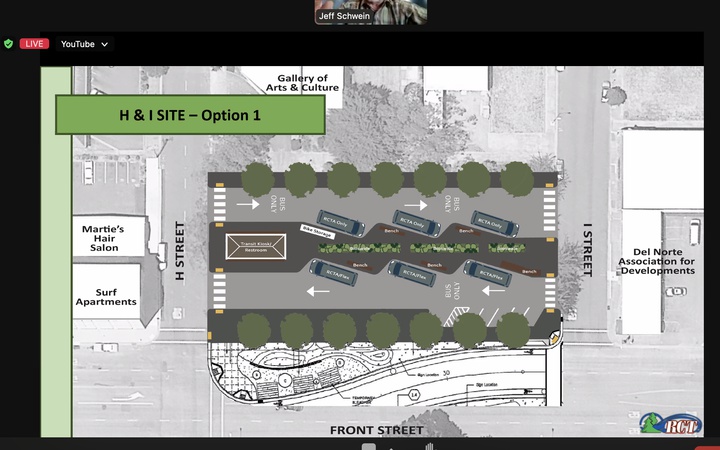 Green DOT Transportation presented two design options for the other site on Front Street between H and I.

RCTA hired Chico-based Green DOT Transportation last year to evaluate seven different sites in the downtown area for a potential transportation hub. The Board of Directors had favored the parking lot on Front Street between H and I streets due to its proximity to the Surf Apartments, a senior housing facility, and the Crescent Arms Apartments.

However, after holding a joint meeting in December, Crescent City officials asked the RCTA Board to reconsider the library parking lot option.

To build the facility, RCTA and Crescent City would have to pursue grant funding. Building a transit hub would cost an estimated $2 million to $3 million, according to Green DOT president Jeff Schwein.

Potential grant options include dollars through the state's Transit and Intercity Rail Capital Program. RCTA is currently developing a joint application with the Humboldt County Transit Authority for Transit and Intercity Rail Program dollars to transition to a zero emissions bus fleet. According to Schwein, the transit center development is included in the grant application.

Other funding options include dollars through the Rural Connectivity Program as well as federal BUILD or RAISE grant programs, Schwein said.

“We’ll be pursuing grants over the next couple of months and hopefully get some awards by August or the end of summer,” Schwein said. “Then we’ll be under construction and ready for operations in the fall or winter of 2023-24.”

Schwein’s design called for keeping the handicap and Tesla spaces and reducing the number of general spaces to 61. 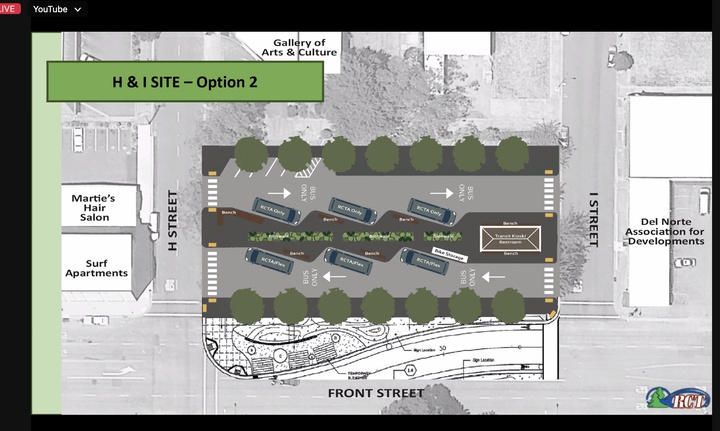 Green DOT Transportation presented two design options for the other site on Front Street between H and I.

Green Dot’s design called for placing the transit hub at the southern end of the parking lot, keeping the area exclusively for bus and transit authority use. A staffed kiosk would be on a center island. People could purchase tickets, get information and it would provide a sense of security.

“The kiosk would act as an operations office to help with dispatch and connections to maintenance if drivers have trouble with vehicles,” Schwein said. “This would be the hub for information flow, which is important in a transit operation.”

There would also be restrooms, though it would be up to the RCTA Board and the City Council to decide if they should be open to the public or if they should just be for the drivers.

Schwein’s design also called for shelters to provide protection from the elements.

For the other option, Schwein called for removing all public parking for the 0.9 acre lot across the street from Surf Apartments, though there would still be some handicap stalls available. The kiosk would be on a center island with “zig zags,” which would allow the buses to come in and take up as little room as possible, Schwein said.

There could be two to three RCTA buses parked at the transit hub at any given time as well as the bus serving Oregon-Point’s southwest route, Rye said.

“If the Point happened, there could be three or four (buses) at the same time, maybe five,” he said. “The RCTA’s core service is two buses at a time plus occasionally a third.”

Tentative staffing hours for the kiosk would be 7 a.m.-6 p.m., he said.

According to Kevin Hartwick, a founding member of the WRCF Board of Directors, recent transient activity in the area has prompted the foundation to lock its door during business hours. Representatives at the library also expressed concerns about how the parking lot is being policed, Hartwick said.

Pointing out that riders are currently having to make change to pay their fare, Hartwick said a kiosk made sense. But in most places it becomes unmanned, he said.

“An MOA is a critical piece so we persist in requiring that a person is there so safety is there,” he said. “This can easily slip away, a year later or five years later.”

RCTA Operations Manager Fernando Hernandez said the transit authority’s dispatchers, which currently work out of its office near the Del Norte County Fairgrounds would be the ones staffing the transit hub.

“The manpower is there and we’re paying for it already,” he said.