« Transit Hub Will Be Near Library Parking Lot, City Councilors, RCTA Board Decide 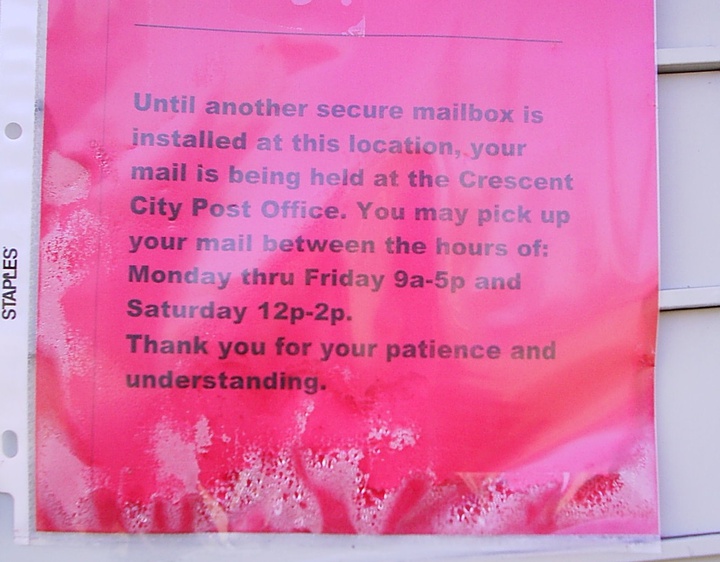 A resident at Shelter Island Mobile Home Park was told to go to the post office to retrieve their mail. | Courtesy of Elizabeth Carter

The Del Norte County sheriff and Crescent City postmaster are urging residents to collect their mail every evening, saying that thieves are now targeting locked units.

The theft has prompted the Crescent City Post Office to put notices on the locked units — which hold 12-16 individual mailboxes — telling residents they need to visit the post office to get their mail, Crescent City Postmaster Susan Vargas told the Wild Rivers Outpost on Wednesday.

“People are having to come in and pick up their mail for their own security,” she said. “This is a nationwide issue. Unfortunately people have to check their mail every night. They cannot let it sit out.”

Sheriff Garrett Scott said his office has been fielding calls from residents worried about the recent uptick in mail theft. He’s also been in touch with the U.S. Postal Service, which has asked for video footage and other evidence the DNSO has collected.

“It appeared that the suspect that hit those used some sort of key,” he said. “Whether it’s a postal key or a homemade key, that’s unknown. My thought is it’s very simple to create a key nowadays. You can go on YouTube and figure out a way to make a key and you can order dummy key systems.”

After studying “different statistics in databases” the increase in mail thefts starts in December and lasts through January, he said.

In December, which is Mail Theft Awareness Month, Scott urged residents to keep an eye on their packages. On Tuesday, he repeated that advice.

“There’s a lot of packages sent during Christmastime and a lot of money is sent through the mai land cards and things like that,” he said. “And after Christmas people a lot of people are still ordering through January. That’s what suspects are after. They know people are getting a lot of packages and so we want to encourage people to be real diligent.”

Scott said the thefts have occurred throughout the county, including Gasquet and Klamath. But most reports have come from the Bertsch Tract south of Crescent City and from the Smith River area. 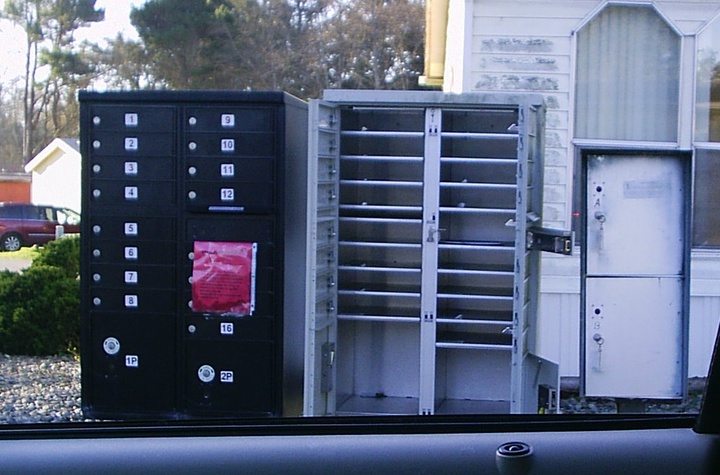 A resident at Shelter Island Mobile Home Park north of Crescent City said they found a notice on their mailboxes Wednesday morning. | Courtesy of Elizabeth Carter

According to a Curry County Sheriff’s Office Facebook post, deputies arrested Cole on Boat Basin Road in Harbor, Oregon after a resident allegedly saw her opening mailboxes and removing mail in another part of the unincorporated community south of Brookings.

The deputy who pulled Cole over saw a large amount of alleged mail on the passenger seat and floorboard in the car Cole was driving. According to the Curry County Sheriff, Cole allegedly admitted to stealing the mail. More than 100 pieces of mail and packages were connected to the Harbor area and to the Smith River area, the Curry County Sheriff’s Office stated.

On Tuesday, Scott said his deputies had made two more arrests recently, though the suspects didn’t have stolen mail in their possession. One suspect was arrested for driving on a suspended license and other vehicle code violations. Deputies impounded his vehicle, Scott told the Outpost.

Another suspect, a pedestrian, was arrested in the Bertsch Tract area south of Crescent City about two weeks ago, Scott said. They also didn’t have stolen mail in their possession, but was arrested on different charges, he said.

“We’re locating the suspects, but they discard the mail so quickly after we get a call that it’s kind of hard to get them in progress,” Scott told the Outpost. “The scary part to me, is it’s popular and it’s different suspects from all over. It’s just a plethora of suspects. The last one that we’re currently looking at through identification of the vehicle and the driver, they’re not even residents of Del Norte County. They’re Oregon residents.”

Scott speculated that the thieves are targeting areas that aren’t well lit. He added that they’re smart enough to wait a few nights or a week before returning to a box they had previously hit.

At Tuesday’s Board of Supervisors meeting, District 2 representative Valerie Starkey said she has had several discussions regarding stolen mail.

“I think it’s something we should be highlighting,” she told her colleagues. “I’d like to coordinate something that would help light those community mailboxes a little bit better and work with the sheriff to see if we can’t get some security on that.”

Scott urged residents who have been victims of mail theft to call his office. He said he’s hoping to collect photographs and information and will share it with other law enforcement officers including the California Highway Patrol and Redwood National and State Parks.