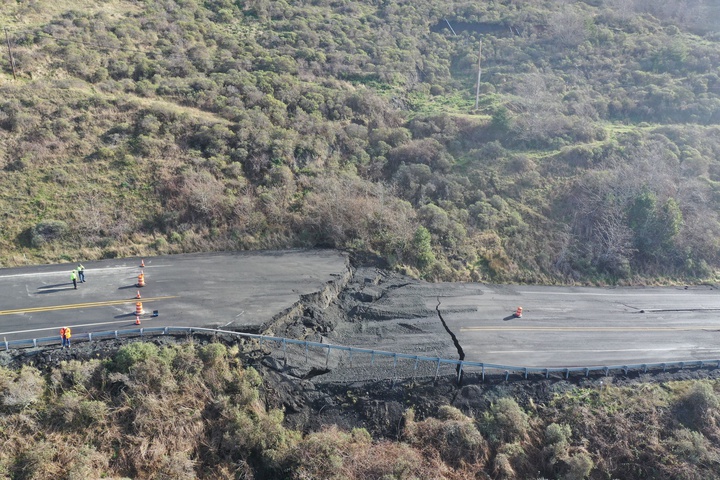 What do #RaisingArizona and the "Arizona Landslide" have in common? We've been watching them raise heck since the 80's.
The latter has struck again, prompting a long closure of #US101 south of #PortOrford in #SWOregon.
U.S. 101 closed about 12 miles south of Port Orford at MP 312 after yesterday's early morning landslide. Not one to be upstaged by Nicolas Cage, the slide caused a roughly 200-yard segment of highway to drop as much as 12 feet in some spots.
The highway remains closed in the area while our geotechnical engineers evaluate the scene and watch for additional movement. There is no estimate for when the highway will reopen, and due to the area's geography, there's also no local detour for this stretch of 101.
Our crews first noticed landslide activity on Jan. 2, when large cracks formed in the pavement. The cracks were patched, but by Friday, a sunken hole had formed in the northbound lanes, prompting a lane closure and 24-hour flagging for traveler safety.
Around 3 a.m. Monday, a larger section of U.S. 101 sank about five feet, and we closed the highway. U.S. 101 continued to drop through mid-mo
rning, although movement began to slow around noon yesterday.And while Raising Arizona remains a cult favorite among some cinephiles, active landslides are a less popular, but common occurrence on the south coast.
We monitor multiple active landslides between Port Orford and Ophir. This active landslide, known as the “Arizona Slide,” has had events like this since the 1980s. Its last big slide event occurred in 1993 and closed U.S. 101 for over a week. For updates at this location, use TripCheck.com