« To Tackle Shortage of Rural Physicians, Sutter Coast Will Become A Teaching Hospital 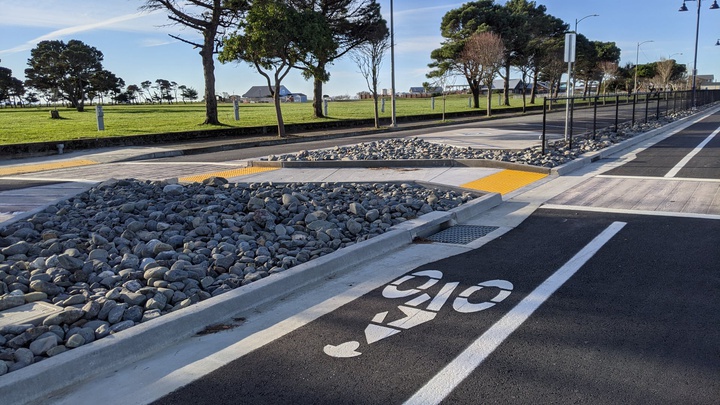 “We might be close enough to build that next piece,” Wier told Councilors, adding that the total cost for extending the project is about $1.4 million. “If, for whatever reason, it is not enough, it could take the place of some local funding and that local funding could be used on another local priority, especially if that $750,000 doesn’t come to fruition.”

Congressman Jared Huffman submitted a request for $750,000 for the Front Street project to the House Appropriations Committee in June. That request has not yet been approved, according to Wier.

Mayor Jason Greenough and Councilor Blake Inscore were absent.
This is the second time Crescent City has requested funding from the Local Transportation Commission for Front Street. In April, the Transportation Commission contributed $400,000 toward extending the project from the finished portion that ends at G Street to I Street, which will cost an estimated $2.2 million.

The city’s request will be on the agenda for the DNLTC’s November meeting, according to Executive Director Tamera Leighton. The Transportation Commission will also consider a competing request from Del Norte County for $515,063 for a culvert replacement project on Washington Boulevard east of Harrold Street.

According to a letter to the Transportation Commission from Board of Supervisors chairman Gerry Hemmingsen, about $530,358 in Highway Infrastructure Program and Regional Surface Transportation Program dollars are allocated to the project.

According to Leighton, it will be up to the Local Transportation Commission to decide whether to divvy the CRRSAA funds between the two projects or choose which one takes priority.

“We have long been talking about the county’s challenge in funding the culvert replacement project under Washington Boulevard, which is very necessary. The commission will have to decide,” Leighton told the Wild Rivers Outpost on Tuesday. “We have more money than we’ve had in a long time in general, but we have a backlog of problems. The culvert maintenance under Washington Boulevard is very important. Front Street is very important.”

According to Wier, however, Front Street has been a priority throughout his entire career with the city. In 2021, Crescent City rebuilt the western half of the street as part of a storm drain replacement project paid for by Community Development Block Grant dollars.

The next section of Front Street the city will tackle, includes adding an archway and tying the road into adjacent Beachfront Park, making it a “destination street” people will be able to “experience,” Wier said. 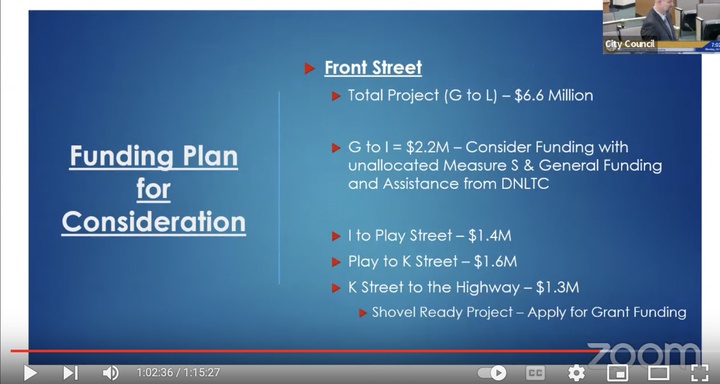 A total of $2.2 million in Measure S tax revenue, general fund and American Rescue Plan Act dollars, along with the Transportation Commission’s contribution will pay for the G to I Street portion of the project, Wier said.

“This will create that meander piece of it that’s currently being designed by Stover right now,” he said. “It will be out to bid this winter. Our hope is in January we will have this piece out to bid.”

Reconstructing the entire eastern half of the Front Street, from G to L, will cost an estimated $6.6 million.

The city requested $5 million in Community Project Funding dollars from Huffman, who visited Crescent City and took a tour of the site. Wier said staff explained that the current state of the road is a barrier to the community accessing Beachfront Park, which is being expanded thanks to $8 million in state Proposition 68 grant dollars the city received.

“Congressman Huffman decided to include it in his appropriations recommendation that’s currently working its way through the House,” Wier said. “But it has passed some significant approvals already.”

On Monday, Councilor Beau Smith, who made the motion to request the CRRSAA funding from the Transportation Commission, said he’s ready to start seeing shovels on the ground.

Though the Front Street reconstruction project is still being designed, Wier said city staff have ordered the materials and are storing them on nearby C Street.

“Due to the long lead time in, parts and supplies aren’t in yet,” he said. “By the time we would have received everything to build it, the weather window would have closed for us. That’s why we’re taking advantage of getting materials here.”

The Del Norte Local Transportation Commission meets the first Tuesday of the month.