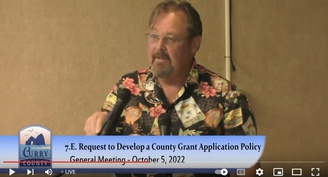 But the board’s chairman, John Herzog, attempted to quash further discussion after Roadmaster Richard Christensen made his request, calling the issue ”a little hiccup” that’s been resolved.
Herzog immediately asked for a motion despite a desire from his colleague Court Boice to question the county roadmaster further.

“I’m not going to sit here today and dig up the past and hang my dirty laundry out there for what happened in August,” Herzog said. “We’re going to develop a policy so we don’t have to go back there. Frank Jerome is going to help us with this, with the treasurer, with everybody involved, so it’ll be easy. We won’t have this problem again.”

According to Christensen, the problem stemmed from County Treasurer David Barnes denying his department’s office manager’s ability to open a grants.gov account. According to Christensen, Barnes said the Roads Department needed to get approval from county commissioners, a process that would have taken three weeks when the grant deadline was in two weeks.

Christensen said his department had “implied approval” from commissioners because they approved a grant agreement with the Association of Oregon Counties (AOC) for $20,000 and a contract with Dyer Partnership using those funds to develop the county’s grant proposals.

“I contacted my liaison commissioner and asked him if he would intervene in this because not only were we not going to fulfill the $20,000 grant agreement with AOC — we were going to lose $20,000,” Christensen said, “potentially we were going to lose $12.7 million in grants that would save $11.5 million of Road Reserves on master plan projects that need to be done on these three bridges.”

Christensen said Herzog worked with County Counsel Anthony Pope and County Finance Director Frank Jerome to open the grants.gov account and, “all is well.” But Christensen said he wanted to make sure “this doesn’t happen again.”

“We want to apply for more grants to leverage as many millions of dollars of road funds for all these projects that are integral to the safety and security of our county and fighting fires and loggers and tourism, people getting home,” he said. “These bridges that we’re applying for, these are bridges there’s no other way to get to these places. They’re not on loop roads. These are bridges that have major impact and if we weren’t able to have the intervention that we had, we would have failed in our job.”

Christensen said in the nearly five years he’s been working for Curry County, he understood that the Board of Commissioners and the county finance department are the “gatekeeper of grants.”

Though Herzog was not going to allow him to speak, Barnes said his problem wasn’t with the grant itself. He said he knows the Board of Commissioners approved the application. However, Barnes said, under state statute, the county treasurer administers grants.

“As far as I’m concerned if the policy states before any county office or department uses the county’s SAM number, DUNS number or UEI number, at least the Treasurer’s Office is notified that the number will be used is all that I’m asking for,” Barnes said, referring to the county’s identifier numbers to apply for federal grants.

Herzog assured Barnes that his office would be notified.

Boice, who last month called for Barnes’s resignation, said the treasurer sent an email stating that Christensen and his staff “went ahead” without anybody knowing about it. Boice said the email Barnes sent was a bad comment.

“It’s all about team, attitude and philosophy,” Boice said. “If we had gotten a simple phone call instead of a snarky email, we wouldn’t have had this discussion. I’m tired of it and people get away with it and then false blame somebody else that’s totally innocent.”

The Board of Commissioners’ vote on a grant application policy was unanimous.