To Tackle Shortage of Rural Physicians, Sutter Coast Will Become A Teaching Hospital » 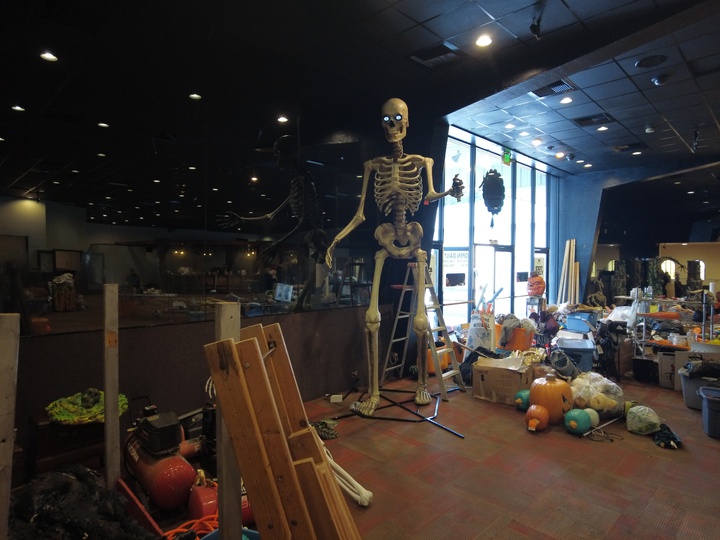 Even when COVID made a haunted manor unwise, David and Jo’Ann Holcomb never stopped adding to their inventory of spookiness.

This is good because their big comeback will take place in about two weeks in the old Elk Valley Casino — a building with about four times the square footage of their previous venue, Jo’Ann Holcomb told the Wild Rivers Outpost.

“We’re going to have about 19 different designated areas or rooms,” she said. “We’re using the entire casino floor as well as the event center.”

David’s Haunted Manor opens on Oct. 14. Tickets are on sale now.
However, though they have a cadre of volunteers ready to help build the scare zones, the Holcombs are still seeking actors. They will hold a final sign-up event from 3 p.m.-6 p.m. Tuesday at the old casino, 2500 Howland Hill Road in Crescent City.

Jo’Ann Holcomb said about 35 people are helping build, including a consistent crew of about 12. As for actors, she said she and her husband are looking for people of a variety of ages and availabilities. The Haunted Manor will be open until 10 p.m. Friday through Sunday and 11 p.m. on Halloween night, which is a Monday.

“We’re looking for humans that are moderately alive and can follow simple directions and have fun because that’s what it’s supposed to be,” Holcomb said. “This is something we would build if no one showed up. We would still do it. It’s fun.”

David Holcomb was 15 when he began building his haunted manor at his parents’ house on Lake Earl Drive. That was back in 1999. Since then, the manor has grown, moving to the Del Norte County Fairgrounds, then the old Englund Marine building at the Crescent City Harbor and, now, the 12,000 square-foot former Elk Valley Casino.

According to Jo’Ann Holcomb, the nonprofit will receive half of the proceeds the manor generates through ticket sales. She and her husband will save the rest for next year’s haunt.

“We’ll need a new venue next year,” Holcomb said. “I don’t know whether we’ll get this two years in a row. It’s kind of a unicorn of an experience.”

The unicorn is “one of those small town things,” Holcomb said. She said a friend told her the old casino is on Bureau of Indian Affairs land and the a local family trust owns most of the building and the property behind it. Elk Valley Rancheria owns the front portion of the building, Holcomb said.

A representative of the family trust agreed to let the Holcombs use the building. They contacted Elk Valley Rancheria, who also agreed to let them use it and “it just sort of fell into our lap,” Holcomb said.

“I want to say we got the keys on the 19th of September,” she said. “It just worked out the way it worked out and we hit the ground running. We’ve got the walls almost completely up in all the rooms and it’s been rad. We are still looking for sponsors to help offset the cost of building materials.”

In addition to moving into a much larger venue — the old Englund Marine building is about 3,000 square feet — the Holcombs have sponsors. Arielle de Garcia, of Orchid Marketing Company, has donated her talents, designing the Haunted Manor’s posters and spearheading its social media campaign.

John Degler, of Border Coast Productions, will do the sound engineering for all 19 rooms, Holcomb said.

Sebastian Monroe, of Redwood Voice and KFUG Community News, has worked with de Garcia on some TikTok videos and other advertising things.

“We’ve become big enough it takes a committee of individuals in order to have this happen,” Jo’Ann Holcomb said. “Ron Cole from Gateway Education has been reaching out within his organization to bring in volunteers to help with building, help with acting, and he himself has been down helping us build.”

Once it’s up and running, starting Oct. 14, there will be two versions of David’s Haunted Manor for everyone to enjoy.
Small Scares, or the sensory walk, will occur from 6-7 p.m.

According to Holcomb, the lights are up and the music is turned down. People, particularly youngsters under 8 and those who are neurodivergent, will be able to explore the manor without jump scares.

Advance tickets, including “fast passes,” are currently on sale. At $8 a ticket, these are cheaper than the $10 tickets at the door, according to Holcomb.

For those with a fast pass, they’ll have a designated time to arrive at the Haunted Manor and be allowed in, she said.

After two years of forced hiatus due to the pandemic, Holcomb said the community response to David’s Haunted Manor has been tremendous. Creating a 12,000 square-foot haunt isn’t a stretch, she said, though they did empty their storage unit of props, animatronics and other spooky materials for the first time in the manor’s existence. Holcomb said she and her husband were worried about finding the people to staff it.

“We asked and people showed up,” she said. “We said, ‘Hey, we want to do this huge ginormous thing. Do you want to come help us because we can’t do it by ourselves? We’ve had a huge response of, “Yes, please!”’”