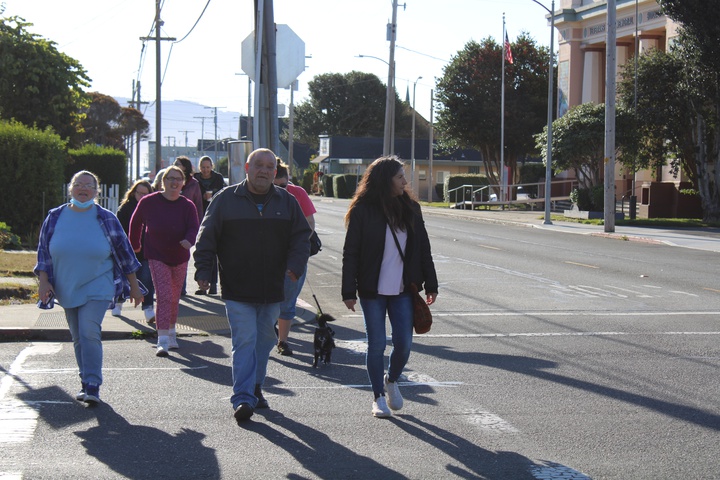 If anyone in Del Norte County is prepared for a tsunami, it’s the students and staff at Uncharted Shores Academy.

Following KCRE’s broadcast of the earthquake audio simulation — basically a 30-second rumble at 10 a.m. Thursday — nearly 160 students left their school, headed out of the inundation zone, past 9th Street to their rendezvous point at First Baptist Church on J Street.

The fact that every student made it to safety in under 10 minutes was a proud moment for the charter school’s executive director, Margie Rouge.

“They didn’t do the quickest route, they did the safest route,” Rouge told the Wild Rivers Outpost as her staff took attendance.

The only Crescent City school in an inundation zone, USA holds monthly tsunami drills for its students. The school’s safety committee has mapped out an evacuation route that avoids power lines and other hazards, shared that map with parents and has a plan in place for them to connect with their kids in a real emergency, Rouge said.

After each drill, staff talk about what their students learned, while allowing them to ask questions and provide feedback. On Thursday, teacher Carla Critz, said one of the reasons they didn’t take the most direct route to the church was to avoid traffic and to avoid crossing the street.

Rouge said she and her staff will meet later to discuss what could be improved.

“What I was really worried about was having the earthquake first and then evacuating,” she said. “We’re supposed to get to 9th Street to be safe and we’re supposed to do that in 10 minutes and we always have, but that has been without having to do an earthquake drill first. Turned out we did (the evacuation) in a little over 9.”

As emergency officials promised, Del Norte County’s tsunami sirens stayed silent. Because the community was preparing for a near-shore Cascadia Subduction Zone event, the quake-like rumble was their warning.

Stationed just outside the Flynn Center north of 9th Street, Emergency Services Manager Maia Mello said she was pleasantly surprised by the response. Roughly 80 to 100 people filtered through the Rec Center, she said. That’s not including those who evacuated on their own. 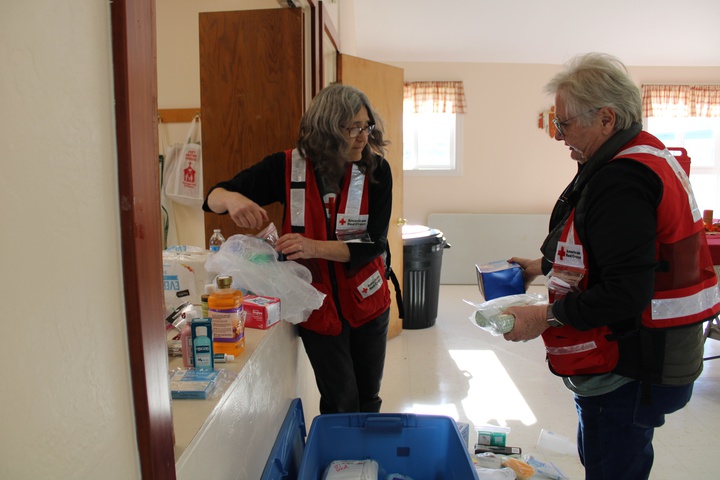 Office of Emergency Services staff and volunteers, first responders and other emergency organizations will debrief on the event, or conduct a “hot wash” to discuss strengths and weaknesses.

“Our goal was even if they can’t evacuate, it’s the awareness of what’s going on,” Mello said.

At First Baptist Church, Andrew Bogar, Marilyn Linkem, Rose Corcoran and other American Red Cross volunteers had four shelter beds set up complete with blankets, water, food and other supplies.
The goal was to show Crescent City residents what an emergency shelter might look like, Bogar said, but in an actual emergency volunteers would be scrambling, and they wouldn’t come from Humboldt County.

Del Norte County has 10 Red Cross volunteers, he said, and it takes 11 to effectively run a shelter. In a Cascadia event, the Red Cross has permission to set shelters up at First Baptist Church, Foursquare Church and the county rec center, which means 33 volunteers are needed, Bogar said.

In addition to bringing blankets, an ADA cot and regular cots, Linkem and Corcoran sifted through the Red Cross’s cache of supplies.

“We’re always evaluating the shelter and looking at the space, there’s clearly no way we’re going to shelter 100 people here,” Bogar said sweeping his hand around the First Baptist Church’s fellowship hall. “This is the first chance we’ve had to practice in this space, so it’s a good time for us to find out what’s going to work, what’s not going to work.”

The goal is to have a safe place identified before a disaster takes place, Bogar said. This includes ensuring the building is accessible to those who are handicap and communicating with people who might have to evacuate before an emergency takes place.

“I hope people take that away and go home and this improves their evacuation plans,” he said, “and they build some kits and they reach out to us for education and training.”

Thursday’s tsunami drill is necessary for Crescent City to keep its designation as a TsunamiReady Community and comes as Del Norte County prepares to seek its own designation.

A tsunami evacuation drill is planned for Klamath on Nov. 3, according to Del Norte Emergency Services Coordinator Deborah Otenburg. The Tolowa Dee-ni’ Nation is planning an evacuation drill for the Smith River area in March.