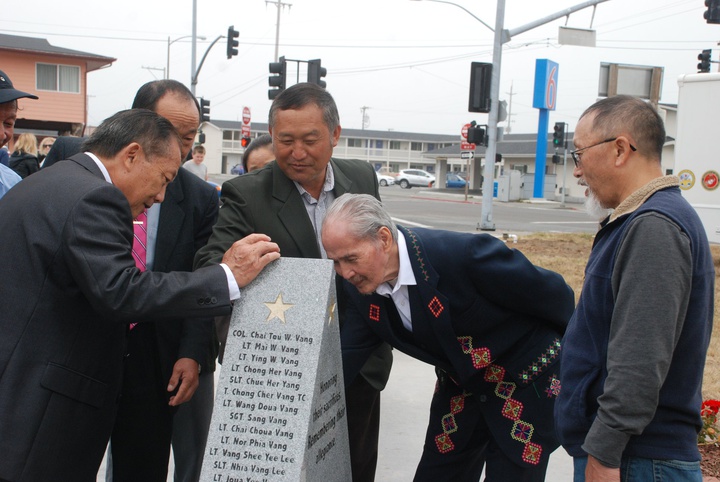 Vue Vang and Soua Phia Lo examine the monument honoring the Hmong veterans who aided the U.S. during the Laos Secret War in this 2019 photo. | File photo: Jessica C. Andrews

From Humboldt Asians and Pacific Islanders in Solidarity:

Humboldt Asians and Pacific Islanders in Solidarity (HAPI) strongly condemns the recent vandalism of the Crescent City’s Point of Honor monument honoring Del Norte County Hmong veterans who aided the US in its ‘secret war’ in Laos between 1962 – 1975 (“CCPD Investigating Vandalism to Hmong Veterans Monument as a Hate Crime,” Wild Rivers Outpost, Oct 19, 2022).  Names of the honored veterans were Soua Phia Lo, Vue Vang, Joua Pao Vang and Nao Toua Vue. The monument, only three years old, had been vandalized in the past, but last week it was toppled, broken, and its foundation cracked.

Americans must stand up against these hate crimes. Such vandalism desecrates the sacrifices these veterans made, and is an affront to all war veterans, as well as the Hmong community who have sought to make a home in the ‘land of the free and home of the brave.’ We commend the Del Norte Veterans Council, their representative Kelly Schellong, and the City Council of Crescent City, for prioritizing the repair of the monument, and for consulting with members of the Hmong community as to their thoughts about what a temporary and permanent repair could be.