Power is Back On For Most Del Norters Following Outage That Affected Over 21,000 Customers » 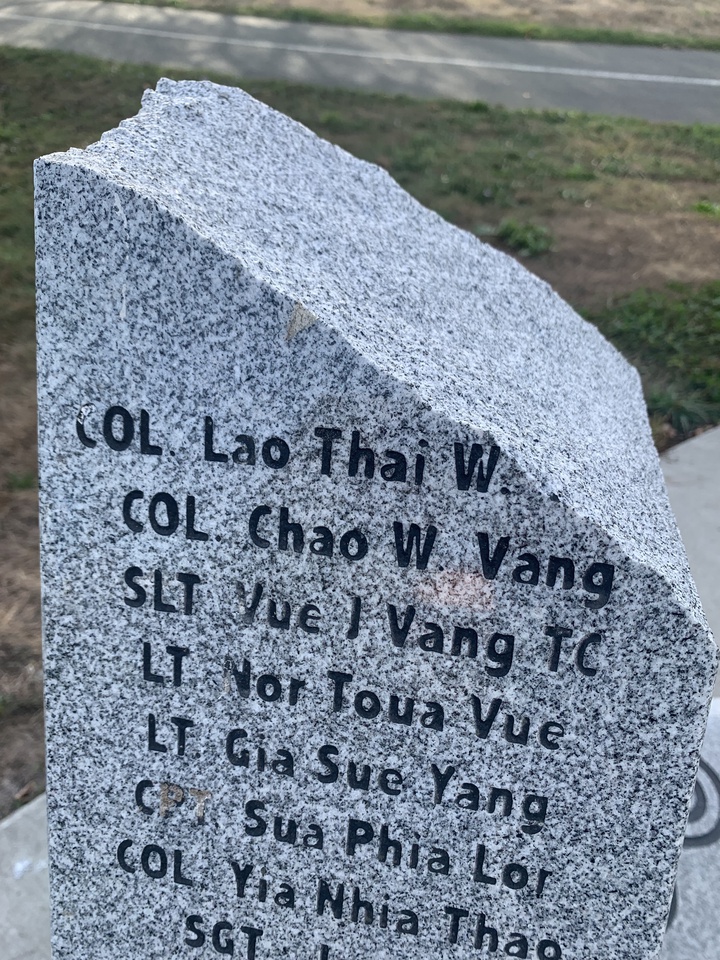 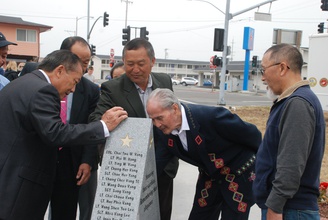 Vue Vang and Soua Phia Lo examine the monument honoring the Hmong veterans who aided the U.S. during the Laos Secret War in this 2019 photo. | File photo: Jessica C. Andrews

The monument stood among five obelisks, each representing a branch of the military, at Crescent City’s Point of Honor memorial at the corner of Front Street and U.S. 101. Because it was the only part of the monument that was damaged, CCPD Chief Richard Griffin said the vandalism seemed “intentional toward that group of people.”

“As of right now, we don’t have any leads,” Griffin told the Wild Rivers Outpost on Wednesday. “We’re still trying to find video camera footage in the area or maybe put some people in the area, so we’ll be relying on citizens that might have information. They can contact our department or send an email to me or message me on Facebook and they can be anonymous if they want, but we’re definitely very motivated with this case.”

On Monday, the monument was found knocked off its pedestal, the top half broken and its foundation cracked, said Kelly Schellong, representative of the Del Norte Veteran’s Council, which dedicated the monument about three years ago.

Schellong, who was notified by the city, said she called the Crescent City Police Department after viewing the damage. Nothing else on the monument was vandalized, she said.

“We’re right now trying to get in touch with the Hmong because I have communicated with the city that it’s important we include them in the thoughts on a temporary fix and replacing it before we move forward with that,” she told the Wild Rivers Outpost on Wednesday. “I feel like it’s their monument.”

Schellong told the Crescent City Council of the damage on Monday. Councilors wanted to have it fixed or replaced by Veterans Day, but Schellong said the monument is so intricate, she’s not sure it could be replaced by then.

The monument bears the names of Soua Phia Lo, Vue Vang, Joua Pao Vang and Nao Toua Vue. It honors those who aided the United States during the secret war in Laos between 1961 and 1975.

The Del Norte Veteran’s Council obtained its first permit to build the Point of Honor Veterans Monument in 2009 and began construction in 2017 using donations in the form of labor, money, in-kind donations and materials. The community raised nearly $175,000 for the monument. 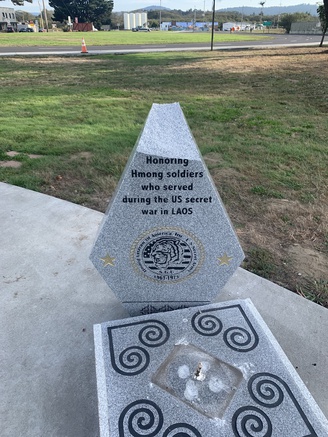 Unknown vandals knocked a monument to Del Norte County's Hmong veterans off its pedestal, damaging it and its foundation. | Photo courtesy of Kelly Schellong

When the Del Norte Veteran’s Council completed the monument, they turned over responsibility of maintaining the site to the city, providing funding for maintenance, replacing flags and vandalism, Schellong said. Vandalism is also covered by insurance, she said.

Since then, the monument has weathered minor vandalism, according to Schellong. This includes broken glass, writing on benches and a few of the bricks on the Point of Honor wall being broken. The city was able to fix that quickly, she said.

“Mostly it’s just garbage and cigarette butts,” Schellong said, “and many of us stop by and clean up quite often.”

Schellong said the Del Norte Veteran’s Council and Crescent City is looking at options for enhancing surveillance and security in the monument area. That could include extending an ordinance that closes nearby Beachfront Park at 11 p.m. to the monument, she said. It may also include more lighting and possibly a livestream on the web, according to Schellong.

“We also discussed possible cameras that might be able to go on the street lights right next to it,” she said. “But all those things have to be researched.”

In addition to communicating with the Hmong community on repairing or replacing the monument, Schellong said the City Council will have to weigh in at a future meeting.

Griffin said he wanted to apologize to the Hmong community for the vandalism that occurred at their monument.

“I just want to express to the Hmong community how very grateful to the service of their people to the United States of America during wartime and what they did,” he said. “We are going to be investigating this the best that we can. We will do everything we can to try and figure out who did this.”