Sirens Will Stay Silent For Thursday's Tsunami Evacuation Drill; Exercise is to Prepare For Cascadia Quake 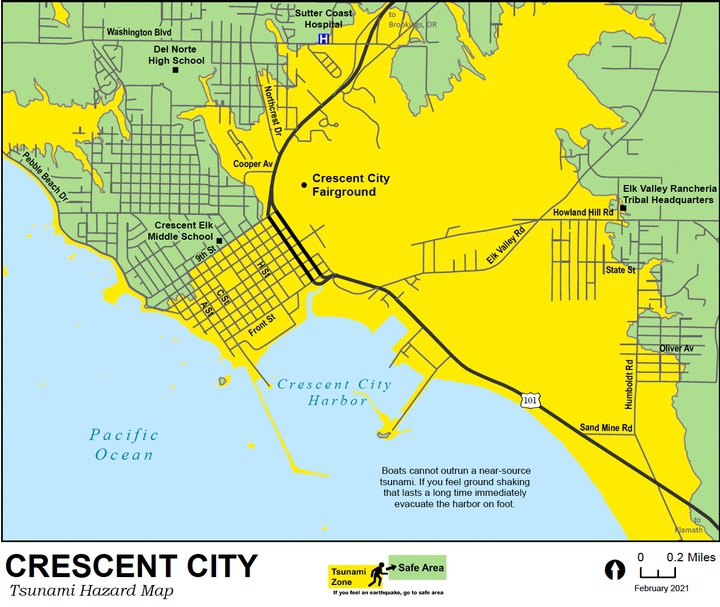 Emergency officials hope to get as many people as possible to participate in a tsunami evacuation drill Thursday. But don’t expect a siren to tell you when to head to safety.

Instead, an earthquake audio simulation will sound on the radio at 10 a.m. Those participating are urged to drop, cover and hold on for a minute and then leave for their safe zone. Since Thursday’s drill is in preparation for a magnitude 8 or better Cascadia earthquake, it’s unlikely the sirens would activate before the first surges hit, Del Norte Emergency Services Coordinator Deborah Otenburg said.

“We’re asking people to walk,” she told the Wild Rivers Outpost. “You don’t want to get caught in a traffic jam if you’re trying to evacuate. If everyone left at once, with a limited number of roads and a limited number of lanes people would be getting stuck in traffic.”

In preparation for the drill, the Del Norte Office of Emergency Services, with help from the sheriff and city police Explorer’s youth, went door to door delivering flyers to make sure people know about it.

The Del Norte County Sheriff’s Office and Crescent City Police Department will direct people where to go. Search and Rescue and the Community Emergency Response Team will also help direct folks, and the Del Norte Amateur Radio Club will be doing call downs to check their capabilities, Otenburg said.

The Del Norte Office of Emergency Services, National Weather Service and representatives from several state agencies will congregate at the county Rec Center at 1005 H Street, conducting outreach and doing some demonstrations.

People are welcome to head there during the evacuation drill since north of 9th Street is out of the inundation zone. However, a different route is recommended for those around the Crescent City Harbor, Otenburg said.

“People in the south part of town — south of Elk Creek — we want them to go up Elk Valley Road,” she said. “Heading south on 101, that area is expected to have liquefaction, so that probably isn’t a great idea. Trying to head up to 9th would have them walking in the inundation zone for a longer period of time because it’s low lying. Heading up Elk Valley is really the best bet for that part of town.”

People are encouraged to look at the new inundation maps before deciding where their safe zone is, Otenburg said.

Otenburg said the Office of Emergency Services has also delivered flyers to residents at the Crescent City Harbor District’s two RV parks, informing them of the drill.

During and following the drill, the American Red Cross will hold a shelter demonstration at the nearby First Baptist Church. Eight volunteers will be at the church, setting up cots and blankets and providing information about everything the Red Cross does from installing smoke alarms to providing volunteer opportunities, said Mary Dorman, the Del Norte chapter’s community volunteer leader.

According to Dorman, the Red Cross’s agreement with the county is to be ready with a shelter that can house 100 people within two hours after a disaster. But where those shelters are set up depends on the situation.

“We have agreements with a lot of different churches and buildings around town,” Dorman said. “In the case of a tsunami, we would not be setting up at the fairgrounds because they’re in the evacuation zone. At the end of the day, it’s going to depend on what kind of conditions the buildings are in and where the county tells us they want to set up.”

Even though the Red Cross has agreed to have a shelter set up within two hours of a disaster, the organization needs time to make sure its volunteers and their families are safe, Dorman said. They also need to know what buildings are safe before moving cots, blankets and tables to that location.

This is why it’s important for people to know where their safety zone is and for them to have an emergency kit ready, or “Go Bag” ready if they do need to leave their home, Dorman said.

“Have your own water and your own snacks for your kids so that they’re OK and satisfied and they’re OK for the time it takes us to set something up,” she said. “It all comes back to reinforcing, the having a Go Bag, being prepared, explaining to your kids what to expect, you knowing what to expect and what role the Red Cross plays in the response and recovery.”

According to Otenburg, the state Department of Social Services are becoming more involved with emergency management, especially for those who may have access or functional challenges or are lower income, which can affect their ability to withstand and recover from a natural disaster.

The California Office of Emergency Services will also observe the drill. That agency, the National Weather Service and the California Geological Survey work together through the Redwood Coast Tsunami Working Group.

Along with holding an evacuation drill, a TsunamiReady community has to have mapped its hazard zones, include information regarding its vulnerability to tsunamis in its FEMA-approved multi-hazard mitigation plan and install signs informing the public when they’re in a danger area and where the evacuation routes are.

A community must also conduct public outreach and education campaigns to public schools.