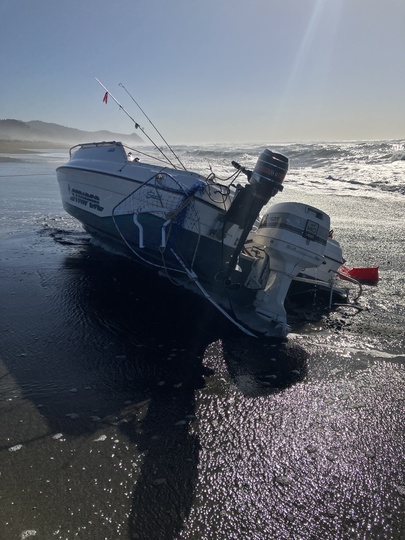 A 52-year-old man had tried crossing the Rogue River bar during heavy surf when his boat became disabled. | Courtesy of the Curry County Sheriff's Office

Sunday October 23, 2022, at about 2:00pm, the Curry County Sheriff’s 911/Dispatch Center received a 911 call from a witness who was watching a boat trying to cross the Rogue River Bar outbound.  The caller stated he was looking through binoculars and that the boat was hit by large waves which disabled the boat and the boat with one person on it was drifting south in heavy seas.  Dispatch contacted the United States Coast Guard and relayed the information to all available first responders and SAR coordinator, Deputy Jared Gray.  Two Gold Beach Police Officers responded to the beach area just south of the South Jetty, where they could see the disabled boat with one person on it.  The boat was about three hundred feet offshore in the breaking surf line and drifting quickly south.

Aquatic Marine Safety Officer Luke Martinez, was in the area and quickly responded as a Curry County Search and Rescue Member, trained, and experienced in water rescue.  Martinez first attempted to swim with his rescue board out through the south side of the mouth of the Rogue River but kept getting pushed back in due to the bar breaking all the way across.  Martinez then went south of the jetty while Gold Beach Officers and the SAR coordinator kept an eye on the boat and passenger to advise Martinez where the boat was.  Martinez paddled out through the breaking surf towards the boat just prior to the boat operator, fifty-two-year-old Michael Malouf of Gold Beach had jumped in the heavy surf from his boat.  Malouf’s boat was boat was being struck by large waves and taking on water.  Martinez was able to reach Malouf in the breaking surf, get him on the rescue board and swim him to the beach about a half mile south of the South Jetty near the Fairgrounds Event Center.  Malouf’s boat washed ashore nearby and a couple bystanders who had witnessed the rescue, tied the boat off to a beached log.

Members of the Gold Beach Fire Department along with Cal Ore Life Flight Ambulance crew attended to Malouf and he was transported to Curry General Hospital.  Prior to the transport, Malouf’s core body temperature was checked by EMS and found to be ninety-three degrees and was suffering from the effects of hypothermia.  Malouf was treated and released from Curry General Hospital a little while later.

The quick response by SAR Member and Aquatic Safety Officer, Luke Martinez, undoubtably saved the life of Michael Malouf, who was wearing a life preserver during the incident.

At the time of this press release, Malouf’s boat was still on the beach and Ev’s High Tech Towing is working on getting the boat recovered.