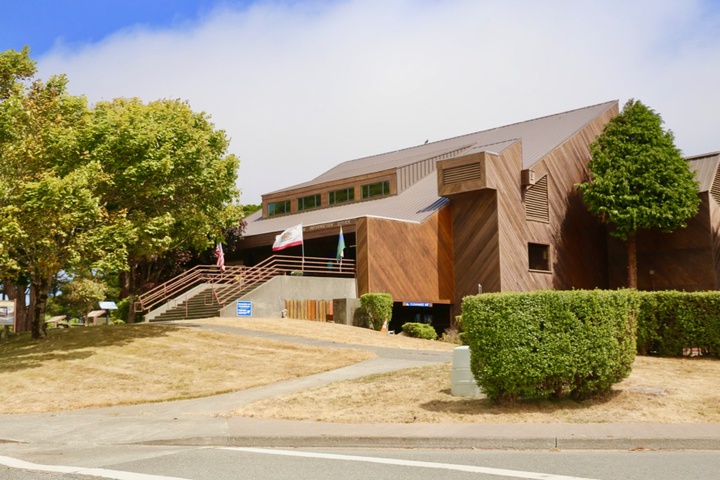 Some big plans may be in store for the 50-year-old Cultural Center. | File photo: Andrew Goff

Crescent City and Redwood National and State Parks representatives have resurrected an old dream of creating a one-stop shop for visitors wanting to explore the area.

But while previous discussions about creating an information center that houses multiple agencies fizzled out, Crescent City Councilors took the first step last week toward seeing if such an endeavor could work.

Councilors unanimously approved an amendment to a contract with GreenWorks to determine if transforming the Crescent City Cultural Center into the “Redwood Coast Welcome Center” — as RNSP Deputy Superintendent Erin Gates envisions it — is feasible.

If the consultant decides it is feasible, seeing the project to completion would require a “long-haul commitment,” Councilor Blake Inscore told his colleagues. They should also be prepared to invest 10 times the $25,000 the City Council approved to change the GreenWorks contract, Inscore said.

“I think we need to see the value of that being the gateway to the national and state parks of Northern California as being so valuable that we shouldn’t even bat an eye at the idea that we may spend a couple hundred thousand dollars to get that done,” he told his colleagues at the Council’s Nov. 7 meeting. “The value of what that could be is something beyond what we could put an ROI on right now.”

The city is also using a $21,523 contribution from the Redwood Parks Conservancy to fund the amended contract with GreenWorks for a total of $48,116, according to the city’s staff report.

GreenWorks’ feasibility assessment of the project could take about two months, City Manager Eric Wier told the Wild Rivers Outpost. If the project proves to be worthwhile, the city would need to assess the building’s condition and begin pursuing grants, he said.

Wier noted that partnering with national and state parks, the Redwood Parks Conservancy, the chamber, Elk Valley Rancheria and the Tolowa Dee-ni’ Nation makes turning the Cultural Center into a welcome center a competitive project.

According to Wier, GreenWorks staff looked at the masterplan and toured the park, which included visits to the Fred Endert Municipal Pool and the Cultural Center. They determined that, while the Cultural Center is “a great building,” it doesn’t quite fit with Beachfront Park’s new design.

Wier noted that even though the 50-year-old building is used for community events, it’s largely empty on a daily basis.

“It’s hard to find,” he said. “The entry especially as you come into that overhang area doesn’t really scream ‘Welcome to a Cultural Center’ or, ‘Welcome to a Park,’ and yet you have the bones that are there that can be just magnificent.”

Wier, who had initial meetings with Gates and her staff on potential partnerships with RNSP, sat down a second time with her as well as representatives with the Redwood Parks Conservancy and the Crescent City-Del Norte County Chamber of Commerce. Noting that the chamber’s visitors center is at the Cultural Center, Wier said their staff provide information to thousands of people every year.

“You could end up in any one of those and your experience is guided by where ever you happen to land,” he said. “This is about looking at the Cultural Center, evaluating that building, that place, to see if it can be that central place, that joint visitors center.”

With the chamber’s visitor center across the street from RNSP’s Crescent City Information Center, Gates said she felt both agencies were “diluting our efforts.” Parks staff and volunteers with the Redwood Parks Conservancy weren’t able to give out information about local restaurants, hotels and other businesses “because we have to be neutral.”

“We all know we’re seeing a funding cycle through grants and soft funding that we’ll probably never see again in our lifetime,” Gates told Councilors. “What we have to do right now is use this first phase to get the plans and schematics we need to make our next phase more lucrative for funding.”

On the chamber side, while staff and volunteers can steer folks to a solid burger or Smith River’s lily fields — places outside the parks — RNSP staff are intimate with their trails and know every nook and cranny in the parks, Executive Director Cindy Vosburg said. The parks’ visitors center also gets more traffic than the chamber does, she said.

“This would enable us as the chamber to direct that many more people to our area businesses, it would increase our TOT tax and help them help our community excel in what we can offer,” she said. “I hope you all see the investment in this. We are excited to be able to partner with the parks and it’s long overdue.”

In addition to approving the amended contract with GreenWorks, the City Council agreed to create a “two-by-two” ad-hoc committee to continue to provide input on the project.