'Bridging the Gap Between Outside and Inside'; Prison Paws Partnership Holds First Graduation Ceremony 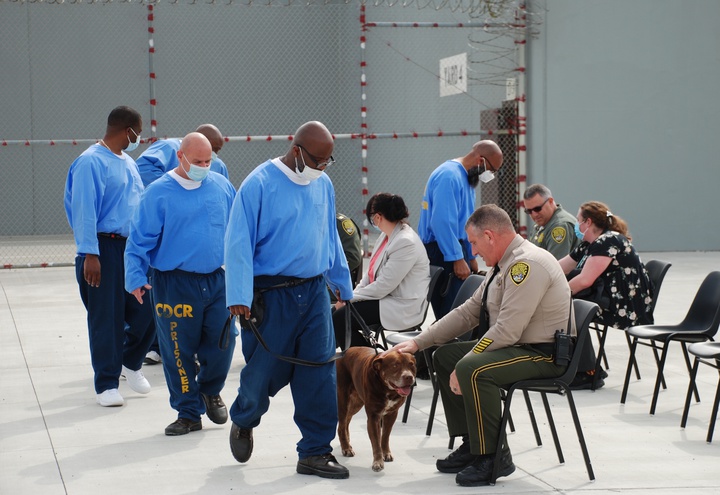 Duane Whaley never imagined that his first encounter with a dog in 24 years would occur inside the wire at Pelican Bay State Prison. So it was with mixed feelings that he celebrated the graduation of Rascal from the Prison Paws Partnership program on Thursday.

Of the four dogs that earned their Canine Good Citizen certificate as part of the program’s graduation, Rascal is the only pup that isn’t spoken for yet, according to Del Norte Humane Society Board President Danielle Wheeler.

Whaley said his charge came from a litter of 11 pups and hadn’t been socialized to humans — something he said he could relate to.

“Rascal taught me patience, compassion, responsibility, selflessness — emotions I didn’t think I had,” Whaley told the Wild Rivers Outpost, adding that he is going before the parole board next month. “He gave me a sense of mattering. I wish I could take him with me.” 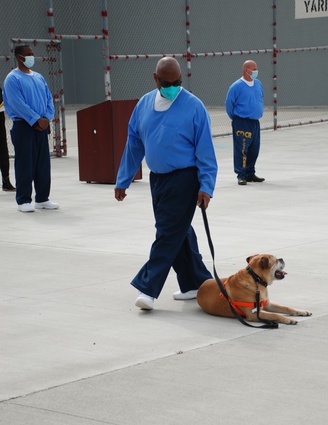 Whaley and seven other inmates from the prison’s D facility have been taking part in the Prison Paws Partnership program since December. A collaboration between the California Department of Corrections and Rehabilitation, the Humane Society of Del Norte and the Del Norte County Department of Animal Control, the program graduated the second round of dogs since it began.

Because of the Omicron surge earlier this year, the inmates were unable to celebrate the graduation of their first four dogs from the Prison Paws Partnership program.

Though the Humane Society began — and continues to operate — as a cat rescue, the nonprofit organization also helped to grow and coordinate a group of volunteer dog walkers at the Del Norte County Animal Shelter, according to board president Eileen Bennett. But the constant overflow of dogs at the shelter made it difficult for them to get adopted, she said.

Bennett thanked her colleagues with the Humane Society and the officers at the prison and praised the work the inmates put in to socialize the pups.

“In the beginning this mission was dog driven. I had no idea what the inside of a prison looked like,” she said. “I love what I’ve seen in this group of guys. They’ve shown dedication, compassion, respect and so much more. The smiles and the laughter are contagious. Hopes for the program are many.”

According to Wheeler, the Humane Society is looking at bringing its third round of dogs into Pelican Bay within the next two to three weeks.

The Humane Society anticipates expanding the program to accommodate eight dogs for round three, Bennett said. If the organization can’t get that worked out, the expansion will take place for the fourth round of pups, she said. 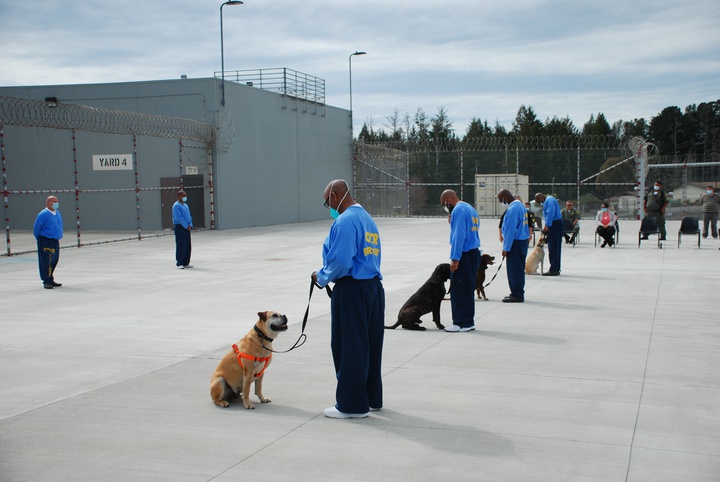 For Henry Earl Duncan — who, along with Jermaine Brooks, was paired with Milo — the Prison Paws Partnership “bridges the gap between the outside and the inside.”

When the program began late last year, Duncan was partnered with Donald Walker, who has since been transferred to High Desert State Prison in Susanville. On Thursday, Duncan said he hopes the program continues.

“We learned how to put the dog’s needs before our own,” Duncan said. “We also learned that it’s alright to say, ‘I don’t know. Can you help me?’”

Duncan’s fellow inmate, Uandre Pettaway, who was paired with Rocco, said the Prison Paws Partnership program made him realize that second chances were possible even if you’ve been incarcerated for nearly 35 years.

“When Millie first came here she was timid and shy,” Pettaway told the Outpost. “My wife is a quiet person. I thought the dog would be perfect for my wife.”

Pettaway said Millie has been keeping his wife company for about four months now.

“My wife cannot imagine not being part of Millie’s life,” he said.