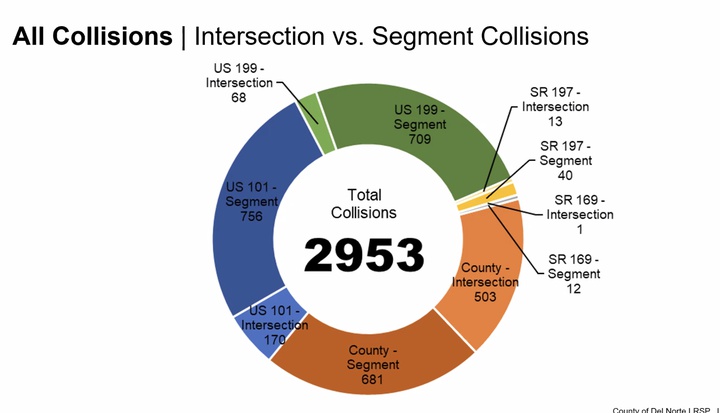 There were a total of 2,953 collisions in Del Norte County in the past 10 years, according to its newly-adopted Local Roadway Safety Plan

Del Norte supervisors on Tuesday got a first look at a comprehensive plan that called for safety improvements on several county streets.

Del Norte County’s Local Roadway Safety Plan also included input from the public, who were concerned about speed limit, pedestrian facilities and infrastructure, according to Kathryn Kleinschmidt, of GHD Inc., who helped create the plan.

“Top suggestions from the public were to evaluate the speed limit or look at speed mitigation measures, install or upgrade pedestrian facilities, improve the pavement quality, look at how to improve signage and install bike lanes and accommodations,” Kleinschmidt told supervisors. “We did also ask what the public identified roadway issues with the survey and the top was a lack of infrastructure. They would like more sidewalks, bike lanes, crosswalks (and) turn lanes.”

The Local Roadway Safety Plan can also be used to obtain grant dollars for education and enforcement efforts, according to Kleinschmidt. She noted that in the case of DUIs, more enforcement rather than infrastructure improvements is needed.

The local plan includes a 10-year collision analysis and compliments the state’s five-year Strategic Highway Safety Plan, Kleinschmidt said. But, though it included data related to intersections with the state highway system, it primarily focuses on county roads, she said.

“We did have Caltrans as a stakeholder and we did correspond with them,” Kleinschmidt told supervisors. “But for the purpose of this study, we wanted to focus on county roadways more because this was a county plan and we’re going to Caltrans for grant funding. Caltrans has their own pot of money that are for state highways.”

The county also worked closely with Crescent City to hold community workshops and seek input from the public in December and in February, Kleinschmidt said. She noted that many stakeholders, such as Del Norte County Unified School District, local law enforcement and fire departments overlap between the two jurisdictions.

Like Del Norte County, Crescent City is in the process of developing its own Local Roadway Safety Plan.

According to the Local Roadway Safety Plan, Del Norte County has seen a total of 2,953 collisions in the past 10 years. Of these, 15 collisions have been fatal, 53 have included severe injuries, 729 collisions have resulted in property damage only.

According to the report, 524 collisions were the result of a vehicle hitting an object; 226 were broadside collisions and 161 were rear enders. There were 28 vehicle-to-pedestrian collisions and 53 total bicycle collisions.

Fatal and severe injury collisions were concentrated around Crescent City, however Kleinschmidt said there was also a concentration in Klamath.

“When we start to look at what was a common occurrence with those, it was more or less a motor vehicle was involved with an object collision,” she said. “A lot of those higher-severe type collisions were with vehicles leaving the roadway. But there is also vehicle-to-bicycles, vehicle-to-pedestrians and other motor vehicles.”

According to the Local Roadway Safety Plan, driving under the influence factored into 15 percent of collisions on Del Norte County roads.

Though she said it’s up to the county to decide which projects they want to pursue grant dollars for, Kleinschmidt included a menu of recommended countermeasures to improve safety at some of the top priority intersections.

According to Kleinschmidt, the Local Road Safety Plan is a living document that can be updated, though it needs a formal update every five years.

During their discussion, Board Chairman Gerry Hemmingsen said he’s noticed an increase in the volume of pedestrian and bicycle collisions, but there doesn’t seem to be monitoring or enforcement.

“I don’t know of anybody that’s ever gotten a ticket around here on a bicycle or jaywalking or anything,” he said. “Especially on Northcrest Drive. I drive that road a lot and it just seems to me that bicycle riders don’t check traffic, they just go across the road and people are expected to stop. And it’s pretty much the same with the pedestrians. Is there a place for additional enforcement on some of these things?”

Kleinschmidt said she and her colleagues did notice an increase in the number of bicycle- and pedestrian-to-vehicle collisions where the pedestrian or cyclist was at fault. She said the Local Road Safety Plan could prioritize enforcement and education to deter those activities.

Kleinschmidt also noted that many bicyclist-vehicle collisions occurred on a street that didn’t have a bike lane.

“I think a lot of these roadways are rural roadways and with very narrow lanes and not a bike facility,” she said. “So that is part of a recommendation coming out of this plan is to look at providing shoulders or bike lanes, and there is a set aside for that bicycle safety in this current call for projects — to add bike lanes.”