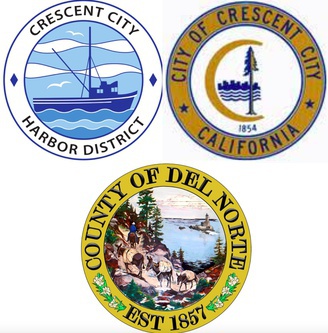 Del Norte County supervisors were unable to reach a consensus Tuesday regarding the county’s contribution to the Tri-Agency Economic Development Authority’s annual loan payment to the U.S. Department of Agriculture.

Supervisors Valerie Starkey and Susan Masten questioned the formula used to calculate each Tri-Agency member’s contribution to pay off that USDA debt and whether the joint powers authority should dissolve once that debt is paid.

Their colleagues, Darrin Short and Chris Howard, said the Tri-Agency board is negotiating with the USDA for some debt relief.
Howard, saying he’s been focusing on relieving the Tri-Agency’s debt service since 2015, argued that the JPA had once been an economic driver for the community before it became a lender of last resort for local entrepreneurs.

“I’d like to get back to the business of economic development in Del Norte County,” Howard told his colleagues. “This agency was set up to do that (through) the city, county and harbor.”

Board Chairman Gerry Hemmingsen was absent.

The Tri-Agency was created to help the community recover economically following the 1964 tsunami. It brought two revolving loan programs to Del Norte County. One program was funded through the U.S. Department of Commerce and had since been administered through the Del Norte Economic Development Corporation since 1976.

The second was created in 1997 using $400,000 the Tri-Agency borrowed from USDA Rural Development. The interest on the loan was 1 percent per annum for a term of 30 years.

According to a report from County Counsel Joel Campbell-Blair, Tri-Agency attempts to settle its debt with the USDA at a reduced amount has been unsuccessful. However, a new proposal to pay the debt in full over five years with interest not accruing is likely to be successful, though USDA officials have indicated they would need dedicated funding sources for those payments, Campbell-Blair said.

According to Short, while the city agreed that it benefits more than the county from the Tri-Agency’s actions, the joint powers authority board didn’t think it would be fair to change a formula that applies to a past debt.

“The majority of the board agreed that it should be applied to any business the Tri-Agency takes up in the future,” Short said, referring to potential changes to how the city, county and harbor fund the JPA.

Starkey, pointing out that in January, Hemmingsen had suggested renegotiating the formula so a majority of the Tri-Agency funding wasn’t coming out of the county’s coffers, said the city realizes more revenue than the county from transiency occupancy tax and sales tax

“In total, over the past five years, they make 60 percent of the total revenues and we make about 38 percent,” Starkey said, combining both TOT and sales tax revenues. “As a sitting board member for the county, I’m opposed to the breakdown of this formula.”

Starkey also brought up the Del Norte Economic Development Corporation and the Tri-Agency’s involvement with that organization, pointing out that the DNEDC is under federal investigation due to its lending practices. She asked what becomes of rolling loan funds the Tri-Agency had allocated to the DNEDC.

Short said since they are two different agencies, it’s his understanding those rolling loan dollars the Tri-Agency allocated to the DNEDC in 2018 wouldn’t come back to the Tri-Agency.
Starkey then brought the possibility of the Tri-Agency dissolving after it pays off its USDA debt.

Campbell-Blair said that while the Tri-Agency is working with the USDA to pay the debt in full over five years, dissolving the joint powers authority was not part of that proposal. He said there had been a proposed compromise with the USDA stating that if the Tri-Agency dissolved the remaining unpaid debt would be sent to the Department of Treasury for collections.

Masten said that predicament is concerning, though she admitted that she didn’t have all the information concerning the Tri-Agency’s history.

“I would have great concerns over having the Tri-Agency be functioning at this time,” she said. “Simply because I didn’t see a lot of success in its 50 years of existence.”

In a report to supervisors on the Tri-Agency in January, Campbell-Blair said the joint powers authority was instrumental in projects involving the sewer, the Border Coast Regional Airport Authority and the Del Norte Visitors Bureau.

The Tri-Agency was also involved in efforts to bring high-speed broadband to Del Norte County, Howard told his colleagues in January.

On Tuesday, Howard asked Masten if she needed more time to research the joint powers authority before agreeing to the county’s proposed $35,000 contribution. He suggested bringing the item back, along with a proposal to discuss the “previous role the Tri-Agency played in economic development.”

Kevin Bingham, who had taken out a loan through the Del Norte Economic Development Corporation to reopen Glen’s Bakery on 3rd Street, said he’s been trying to pay it off for eight years and sold his home to pay back his loan. Bingham accused the DNEDC of malfeasance and, though it’s a different agency from the Tri-Agency, asked why “certain individuals want to re-birth the Tri-Agency.”

“It’s a wrong use of funds and I feel like this needs to be put to bed,” he said.

Howard reiterated that the Tri-Agency was set up as a member agency of the city, county and harbor.

“It’s not with the Del Norte Economic Development Corporation,” he said. “We’re not anything to do with that, I want to be clear. We are trying to clear up the Tri-Agency’s piece of this as a lender of last resort through the USDA’s revolving loan fund.”

Starkey, adding that the Office of the Inspector General was unable to give information about its pending investigation into the Del Norte Economic Development Authority, suggested waiting until the OIG comes out with its report.

Campbell-Blair said the Del Norte Economic Development Authority is different from the Tri-Agency.

In January, Campbell-Blair said the DNEDC is a private entity, while the Tri-Agency is a public agency that’s subject to the California Public Records Act and the Ralph M. Brown Act.
Documents