In response to a recent petition to remove “sexually explicit” books from the children’s section of the Chetco Community Public Library in Brookings, the Curry County Board of Commissioners unanimously voted on Wednesday to write a letter to the county’s five public libraries, asking that certain books be placed in restricted areas away from unsupervised children.

Local library directors like Julie Retherford of the Chetco Community Public Library and Jeremy Skinner of the Curry Public Library in Gold Beach, however, say that the board’s request is based on highly sensationalized or completely inaccurate information. Because of this, and because of the board of commissioners’ lack of authority over special districts, the county’s public libraries say they plan to disregard the board’s request.

“Children are required to be accompanied by adults,” Skinner said. “The idea of [unchaperoned] children running around is inaccurate. Beyond that, all I have to say is they're’ welcome to their opinions. It's not going to change what we do. We all work very hard to make sure that we're following best practices for libraries in Oregon.” 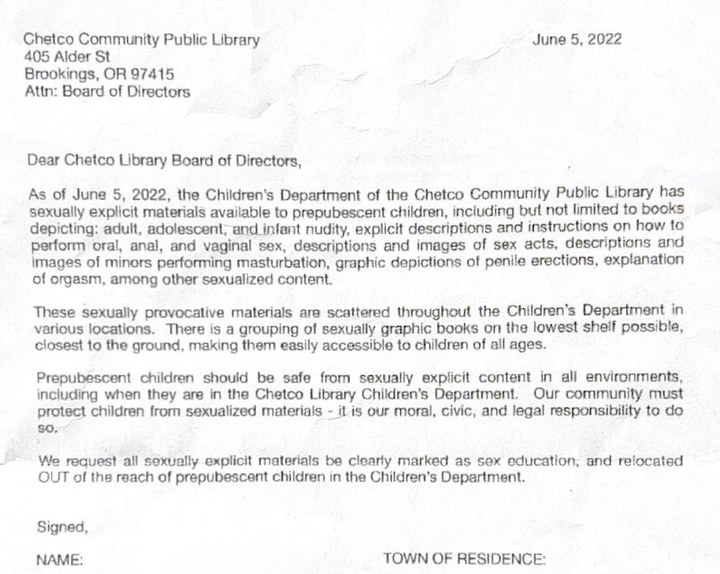 Wednesday’s vote was preceded by a lengthy discussion from the board and concerned residents on both sides of the argument. While the petition and the agenda item, written by Commissioner Court Boice, do not address any specific LGBTQ communities or issues, the ensuing discussion quickly shifted to homophobic and transphobic dialogue between citizens and Curry commissioners, calling into questions the motives of the petition.

One of the more blatant transphobic opinions was given by Boice after he referenced an unattributed stat about the number of on-duty police officers killed in the U.S. each year. His connection between these two ideas is unclear.

“You look at what we’re teaching our kids: We’re telling them they have to accept that somebody wants to pretend like he’s a woman, and we’re supposed to pretend with him?” Boice said. “It’s breaking down our system. If that gets me recalled, or get letters that this resolution is sickening, I’ll gladly take that, because at least I know I didn’t buckle at the knees.”

Retherford told the Outpost that the issue began several months ago, when the Chetco Library’s Board of Directors rejected a request by community members to remove Maia Kobabe’s graphic novel “Gender Queer: A Memoir” from the library’s adult section — not the children’s section.

“We have a very specific policy for how we make our book choices, and this book is fully in line with that policy,” Retherford said. “There are some nude parts, but the intended audience is for adults. The merit of the book is well-documented.” 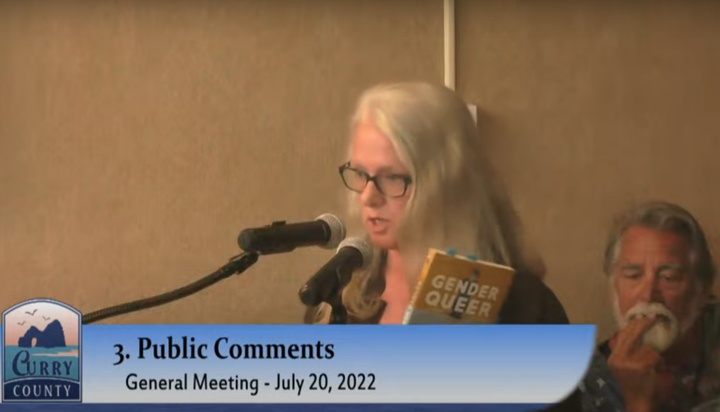 A Brookings resident who introduced herself as “Kelly Evans,” publicly spoke out against the book at Wednesday’s meeting, calling it a “Hustler [magazine] for children.”

“Back in October of 2020, I approached the library regarding the books they had for children to read,” Evans said. “One of them being the despicable ‘Gender Queer.’ This isn’t a reading book, it’s an illustrated sex book. You want to see how oral sex is performed? It’s in this book. We’re not a bunch of old grannies wanting to purge books that offend us, we’re looking at books that are typically harmful for children in the long term.”

After the Chetco library rejected the proposed removal of “Gender Queer: A Memoir,” Retherford said that the issue snowballed, causing a cry for educational books about puberty and gender identity to be pulled from library shelves.

“The library board upheld my decision to keep the book,” Retherford said. “From there it spread. More people became involved and began complaining about the types of books in the library. We had conversations with locals and politicians about these issues. I stand behind our policy. Our books are perfectly appropriate for the age groups they're intended for.”

The list of books now under scrutiny at Curry County’s public libraries includes: “It’s Perfectly Normal,” published in 1994, “What's Going on Down There,” “The Period Book: Everything You Don't Want to Ask” and “Who has What.”

“The updated version of ‘It’s Perfectly Normal’ includes more info about LBGTQ issues, which is certainly causing some of the difficulties,” Retherford said.

While a slew of transphobic and homophobic dialogue was met with no criticism from Curry commissioners during the public-comments section of Wednesday’s meeting, the words did draw vehement responses from locals like Nancy Sue Rose of Nesika Beach.

“Homosexuality is not something that is developed, you are born that way,” Rose said. “My sister is a lesbian, she’s been with her partner for 40 years. That’s longer than anybody else that’s been together in my family. She was born that way. I saw how she was as a child. It wasn’t any book that made her that way.”

Rose, who has worked for three different library systems in her lifetime, also challenged Boice on his agenda item. After presenting him with several rhetorical questions, she invited the commissioner to meet her at the Curry Public Library to show him how it operates.

“Have you been in any of the five libraries in Curry County?” Rose asked. “Do you know how books are classified and cataloged and shelved? To me your resolution makes no sense and parts are just not true. An adult book in the children's section? I don’t think so.”

Commissioner Chris Paasch voiced several times at Wednesday’s meeting that he didn’t believe the agenda item was a Board of Commissioners issue due to its lack of authority over the county’s special districts. However, the commissioner also expressed his disapproval of the public library’s selection.

The commissioner also seemingly expressed his disapproval of trans people, but said that his opinions had no authority over other people's freedoms.

“If somebody wants to be trans, I don’t have a say in that,” Paasch said. “I have to deal with that. I believe one day they will stand in front of God. That is not my business. Do I wish they would burn [the aforementioned reading material] and throw it in the trash can? Yes I do, but I don’t have a right to tell them that.”

Commissioner John Herzog, meanwhile, said little about trans issues during the discussion, but compared reading the educational material to attending an R-rated movie.

“We’re not asking to burn it or ban it,” Herzog said. “We’re asking to put it somewhere [out of reach of children.] Growing up, if you wanted to go see an R-Rated movie, you had to show ID. I praise the lord for that, because a couple of my buddies had fake IDs and got in to watch the one with the gal whose head spins around … the Exorcist, and I’m glad I didn’t. I never have seen it and I don’t want to. Scary movies are not good for me.”

Responding to the board’s opinions, Retherford told the Outpost that all opinions are welcome, but added that the spread of misinformation can be harmful to public libraries.

“These are very standard, educational books found in the non-fiction section of all libraries, as they should be,” she said. “They are being characterized as obscene, and they’re not. Anything in the children's section is educational. The picture they are painting from their public forum is not accurate or helpful for public libraries. They are certainly welcome to share their potions and make their requests. But they have no authority over special districts.”