« Del Norte Fights Back Against Cancer; Relay for Life Fundraiser This Weekend 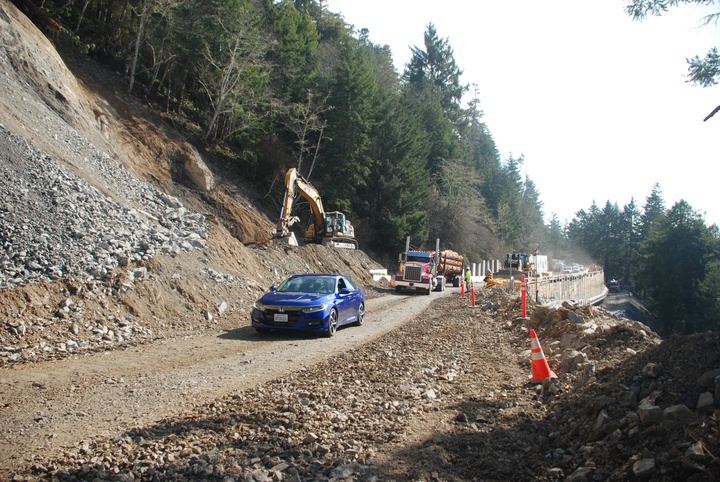 Fifteen months after whittling seven options for a permanent fix to Last Chance Grade down to two, Caltrans District 1 representative Jamie Matteoli gave a more in-depth description of what those alternatives could look like.

The five project alternatives Caltrans discarded would have taken longer to build, have greater impacts and wouldn’t have worked as well, Matteoli told the public at a town hall meeting Tuesday. The two remaining alternatives, one of which includes a tunnel, allows the agency to save an estimated $10 million and shave a year off the building schedule, he said.

“We’ve been focusing on this one key engineering deliverable, the project description,” Matteoli said. “It describes the work we’re doing and provides the maps and graphics so we could see what it looks like. The project description is what allows our environmental team to advance the technical report.”

In April 2021, Caltrans announced that it was exploring the feasibility of constructing an inland tunnel that avoids the landslide roughly 10 miles south of Crescent City. This option is Alternative F, according to Caltrans.

Caltrans is also exploring a second option, Alternative X, which is an end-to-end re-engineering of U.S. 101. On Tuesday, Matteoli said this proposal would include six-to-eight foot wide shoulders throughout, straightening the road’s curves while moving it 100 feet inland in the south and 150 inland at the north end.

Since the California Transportation Commission awarded $50 million for the geotechnical engineering and environmental phase of the project in 2019, Caltrans has spent about $25 million, Matteoli said.

“We’ve just completed the project description and are preparing the draft environmental document,” he said. “We’ll be circulating that document in 2022 and having public hearings so we can select a preferred alternative in 2024 and we’re working towards that final environmental document in 2025. At that point, we can begin to design work leading up to the construction of the project.”

Green Diamond representatives and state and national park officials, along with tribal representatives also make up a working group of land managers. There is also a group for scientists, engineers and archaeologists, Matteoli said.

Since 2015, “something major has happened every year,” from Caltrans coming up with seven proposed options, including one that leaves the highway the way it is, to the CTC’s Del Norte County visit in 2019.

Figuring out how to pay for the project’s construction is the “million dollar question,” however, said the town hall meeting’s host, State Sen. Mike McGuire.

According to Caltrans’ Last Chance Grade project website, Alternative X would cost an estimated $500 million to build. The construction length is 1.1 miles and is located entirely within Del Norte Coast Redwoods State Park.

In addition to the wider shoulders and to moving the highway inland, Caltrans has reduced the scale of the proposed retaining walls, Matteoli said.

Alternative F has been refined so the tunnel that avoids the landslide also skirts an area in Del Norte Coast Redwoods State Park with larger trees, Matteoli said. The refined project also includes a shortened bridge, which reduces the project’s cost, he said.

According to the project website, the tunnel option was initially expected to cost an estimated $1.3 billion.

The refined Alternative F also includes an operation and maintenance center for the tunnel. According to Matteoli, Caltrans was able to design the building so its visual impacts from the California Coastal Trail are minimized.

“We also refined the location, geometrics and shape of the tunnel itself, resulting in a shorter tunnel by a bout 6,000 feet,” he said. “The tunnel has been simplified so it’s one single tunnel and that allows us to simplify construction and reduce costs.”

According to Matteoli, alternatives X and F are each expected to have at least a 75-year lifespan.

Speaking of how to go about paying for the project’s construction, Matt Schmitz, of the Federal Highway Administration, spoke of discretionary grant programs in addition to the gas taxes that pay for road construction. There’s also bridge investment programs and funding for tunnels.

Likening the Last Chance Grade fix to the construction of the Oakland Bay Bridge, Schmitz said he was impressed by the traction the project has received in the last few years.

“I know it feels painfully slow to a lot of friends in the forum. I’ve seen a lot slower when you have the complexity of mother nature, geology and environment and funding challenges,” he said. “This project is becoming much more poised to be competitive because it’s gone from, ‘we have a real need here and some ideas.’ These alternatives are becoming more tangible and finite and describable. I’m at least hopeful that this project will compete well.”

“We are targeting two-way traffic to be open again in early 2023,” he said.