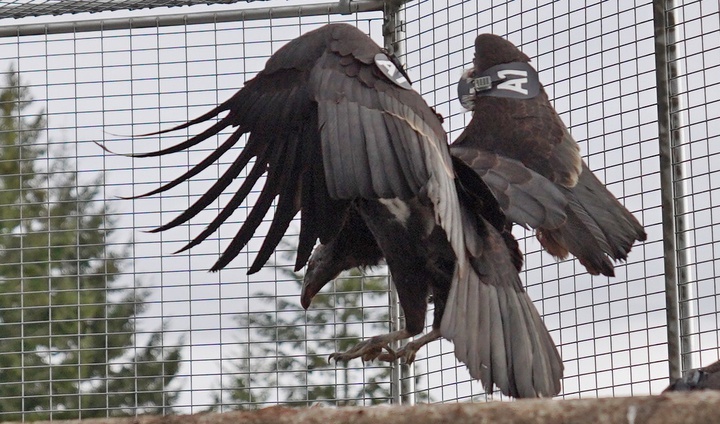 Condor A1 is the final member of the first cohort to be released above Yurok ancestral territory. | Photo courtesy of the Yurok Tribe

On Tuesday, July 12, the Northern California Condor Restoration Program (NCCRP) will attempt to release a fourth California condor (prey-go-neesh) into Yurok ancestral territory and Redwood National Park, where the critically endangered birds have been absent for more than a century.

The timing of the release is contingent upon a few factors. The NCCRP will wait for free-flying prey-go-neesh to be present at the management facility before they initiate the release procedure. The presence of additional prey-go-neesh will ensure A1 is as calm as possible during the transition into the wild. Prior to the release, A1 must voluntarily enter and exit a staging pen with access to the outside world. The release can be viewed live via the Yurok Condor Cam, which can be found here: https://www.yuroktribe.org/yurok-condor-live-feed The NCCRP is a partnership between the Yurok Tribe and Redwood National and State Parks (NPS).

A1 will join Ney-gem' 'Ne-chween-kah (A0), Poy'-we-son (A3) and Nes-kwe-chokw' (A2), which represent the first prey-go-neesh to soar over Yurok skies since 1892. A1 is the final member of the first condor cohort to be released into the redwood region. The second group of birds is expected to arrive next month for a late summer/early fall release. The NCCRP plans to reintroduce one cohort of prey-go-neesh every year for at least the next two decades.

The NCCRP released the first three prey-go-neesh on two separate days in May. The staggered reintroduction is one component of a comprehensive management plan for the new population. Monitored seven days a week, the previously released prey-go-neesh are adjusting exceptionally well to their new environment. NCCRP biologists and technicians regularly observe the birds exhibiting healthy behaviors, such as feeding, soaring, and finding appropriate and safe roosts. The cultural and environmental restoration project is off to an amazing start.

The Yurok Tribe and Prey-go-neesh

For the Yurok Tribe, condor reintroduction is more than a rewilding project. In a very real way, restoring condor habitat and returning prey-go-neesh to the Yurok landscape signifies progress toward restoration of Yurok culture and traditions. Prey-go-neesh is prominently featured in the Yurok creation story. The condor is also an essential component of the Tribe’s White Deerskin Dance and Jump Dance, both of which aim to bring balance to the world.

The Yurok Tribe started working in earnest on condor reintroduction in 2008. For the Yurok Tribe, the restoration of this sacred species is part of a larger effort to restore the temperate rainforest ecosystem. Initial funding from the US Fish and Wildlife Service allowed the Yurok Wildlife Department to implement a study to determine if Yurok ancestral territory is still capable of sustaining condors. With additional funding support from Redwood National Park, the U.S. Fish and Wildlife Service, the Bureau of Indian Affairs, as well as the Administration for Native Americans, Pacific Gas and Electric Company, Global Conservation Fund, the Redwood National Park Foundation, and many more corporate, agency and private supporters and citizens, the Yurok Wildlife Department completed a vast volume of work to prepare for the reintroduction of this imperiled species.

Working in collaboration with the Ventana Wildlife Society, Redwood National Park, and Pacific Gas and Electric Company, the Tribe designed and built the NCCRP release and management facility. The flight pen includes a simulated, shock-wired power pole (to teach the birds to avoid this threat after release), two four-foot diameter pools and a perch overlooking old-growth redwood forest. NCRRP staff are present 24 hours a day seven days a week to observe the birds from custom-modified shipping containers which form a fire-resistant observation structure, complete with isolation pens, where birds receive regular health evaluations and treatment if required.