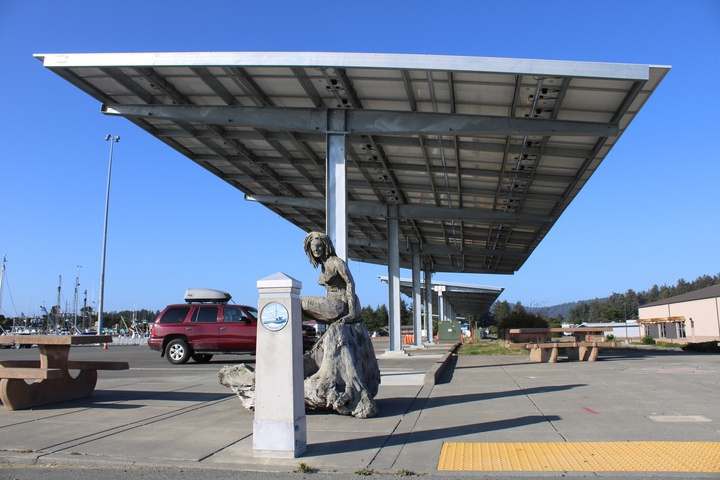 Lemus, who is spearheading a redevelopment project at the Crescent City Harbor, offered a workaround.

Under the leadership of former harbormaster Charlie Helms and deputy  harbormaster Lane Tavasci, the Crescent City Harbor District entered into a power purchase agreement with Lemus to install the solar panel system in 2017. In February 2018, commissioners met with Costa Mesa-firm American Diversified Energy, which would finance, build and maintain the project.

According to Lemus, the original agreement called for a 1 megawatt system, which is similar to the system REC installed at the Humboldt Bay Harbor District. The Crescent City Harbor District’s goal was to save roughly $35,000 in its electricity costs.

Following a series of delays on ADE’s part, the harbor district placed a lien on roughly $700,000 in solar panels that were being stored at the Crescent City Harbor. In December 2019, Lemus stepped in as the managing partner for ADE, paid the lien and renegotiated a power purchase agreement with the harbor to get the project constructed.

According to the Harbor District’s current CEO, Tim Petrick, the power purchase agreement stipulated that ADE-Crescent City would make a lump sum payment of $288,750 to the harbor. This would be equal to $25,000 in lease payments to the harbor district over 25 years, but would be paid up front, Petrick said.

Under the power purchase agreement, the Crescent City Harbor District would pay 14.5 cents per kilowatt hour to ADE-Crescent City.

On Tuesday, Lemus said the now-577 kilowatt system began producing electricity in February 2021. Between February and November 2021, the system produced a total of 658,000 kilowatt hours of electricity. As a result, the harbor district saved $105,407 in utility payments to Pacific Power, he said.

According to Lemus, the solar panel system is ADE-Crescent City’s only asset.

“That SLA payment has not been made by the legal owners because they don’t have the funds,” Lemus told commissioners. “Until that’s paid, of course the harbor is not going to pay anything to them. That’s why you haven’t been paid anything.”

Meanwhile, Lemus is in the middle of negotiating a ground lease agreement with the Crescent City Harbor District for Bayside RV Park. After answering a request for proposals in 2020, Lemus unveiled plans for a redevelopment project in 2021 that included plans to install 50 cabins at the RV Park and urging people with Airstream Travel Trailers to visit.

On Sunday, Franklin went the Harbor District a letter threatening to seek a temporary restraining order if the district didn’t table the proposed ground lease agreement. He argued that the Harbor District violated California’s Surplus Lands Act by not offering to lease the RV park to another public agency or affordable housing authority.

Franklin and several of his neighbors worry that they will be evicted to make way for the redevelopment project at Bayside RV Park.

“There’s no place for us to go,” Franklin told the Wild Rivers Outpost on Monday. “There’s not an RV park within 200 miles that will take in almost all of our trailers because they’re older than 2006.”

According to Petrick, while the Crescent City Harbor District approved an ordinance to authorize 30-day stays at Bayside and Redwood Harbor RV parks, its current long-term tenants are grandfathered in. Though the district is working on reducing the number of tenants at the parks, they won’t be evicting people to make way for the redevelopment project, he told the Outpost on Thursday.

Under the proposed ground lease agreement, Lemus and REC would pay $33,333 to the harbor district each month for a total of $400,000 annually. The lease would have an initial term of 25 years and REC would be able to extend it for up to three periods of five years.

On Tuesday, though Commissioner Wes White and his colleagues were initially dismayed at not receiving the $288,750 service-level agreement payment from ADE-Crescent City, White said that the $10 million cost to REC for the redevelopment project includes the $288,000 investment that would have gone to the harbor.

“He is going to lease the land from us and we are going to receive the lease payment from that land,” White said. “(Lemus) is going to make his profit by whatever he does with that land.”

Petrick said Lemus will lease Bayside RV Park from the Crescent City Harbor and will continue to run it as an RV park. Lemus currently leases an overflow lot belonging to Redwood Harbor Village RV Park and runs it as an RV park.

“He puts money into the property and he makes money off of the business,” Petrick said. “We make a percentage of that money plus the lease payments. If he defaults — if he fails — any money he put into that land, all the improvements, we own.”

The Crescent City Harbor District is also willing to work with RV park residents who are unable to move because their vehicle is inoperable or it’s not new enough to go to another park, Petrick said. This includes getting some FEMA trailers to assist residents with, which as a public agency, the harbor district could get for incredibly cheap or even free.