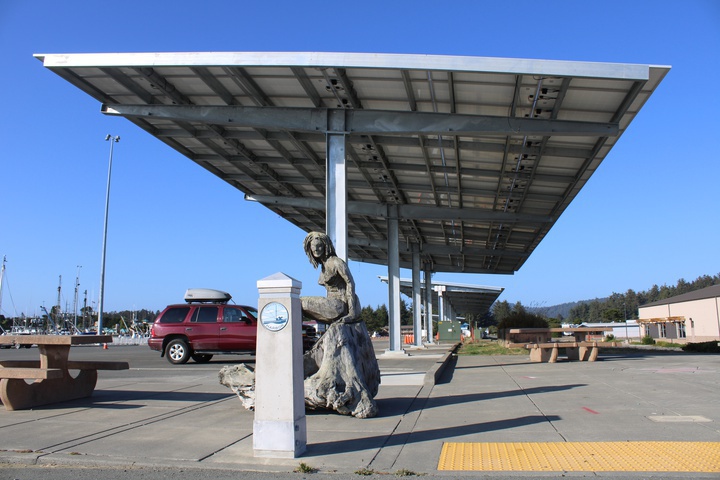 One component of a proposed revitalization plan for the Crescent City Harbor includes solar canopies like these around Bayside RV Park. File photo: Jessica Cejnar

Facing angry residents who accused him and Harbor District commissioners of putting veterans and single mothers on the street, CEO Tim Petrick said the project would bring a higher quality of clientele to the parks and improve its quality.

But evicting anyone currently living there isn’t part of the discussion, he said Tuesday.

“As we go towards the future, things will change. But in the next year to year-and-a-half to two years,” Petrick said. “We’re not talking about pushing you out next month. That’s not going to happen. We’re talking about improving things so you have a better quality place to live.”

The beautification of Bayside RV Park is among the first phase of a redevelopment plan Alex Lemus, of Renewable Energy Capital LLC, brought to Harbor Commissioners on Tuesday.

In addition to the RV park, the plan will also include improvements to the old Spotty’s Car Wash and Oil Change and old Englund Marine parking lots and buildings. Lemus also proposes installing a canopy solar system around Bayside RV.

Under his development plan, Lemus’s the revitalization project aims to increase the number of overnight visitors to Bayside RV while retaining its existing visitors. This includes investing in landscaping, trees, bushes, plants, patios, decks, walkway, permeable paving, fences and guests.

REC also hopes to attract visitors who use Airstream trailers.

According to the plan, Lemus’s firm plans to purchase Airstreams for overnight stays as well as park cabins to be placed “strategically throughout the park.”

“The long-term success of the Crescent City Harbor Redevelopment Plan is dependent upon dramatically increasing the number of tourists that visit the harbor,” Lemus stated in his report.

REC also plans to implement a marketing plan that highlights the area’s local seafood as well as fishing opportunities on the ocean and on the Smith River.

Lemus said REC is budgeting “somewhere between $2 million and $2.5 million when everything’s said and done for Bayside.”

In his report, Lemus said some of the challenges REC is dealing with has to do with the Harbor District’s lack of a credit rating, current audited financials and an unwillingness to encumber their balance sheet with more long-term debt.

Lemus also included potential 2021 lease revenue the Crescent City Harbor District is expected to receive from Redwood Harbor Village and its overflow lot — a total of $470,966.

According to Lemus’s report, 2021 lease revenue for the harbor is expected to be $345,818 more than it was last year.

In response to a question about rent from a Bayside resident, Lemus said REC is hoping to get a higher percentage of visitors who are paying the park’s daily rate rather than increasing anyone’s rent.

But he deferred to the harbor when it comes to a transition plan for the RV Park’s current residents.

It was Harbor District Board President Brian Stone who said in the slow months the port plans to “take the trailers that are inside Bayside and move them over to the Redwood Harbor Village.” This would allow residents to continue living at the harbor while REC works on their beautification project, Stone said.

For some assurances that the Harbor District wasn’t planning on evicting anyone weren’t enough.

“In the meantime, you’re basically telling everybody here that we may not be kicked out next month or in the next year or two years from now,” one resident said. “But eventually it will happen.”

Petrick responded that he wasn’t sure what would happen that far out.

“I could be kicked out of my house in six months,” he said.

The Harbor District Board’s newest member, Gerhardt Weber, said he understood residents’ concerns. But, he said, the harbor has other worries besides the RV park such as dredging, security and infrastructure improvements.

“We’re trying to do our best to make sure that the whole community works,” he said. “Now individual cases for you might be super important and I am feeling it, so we need to come up with some kind of solution.”

Another RV Park resident said that while he understands the Harbor District doesn’t plan on evicting anyone, a beautification and infrastructure project could be done without displacing residents.

He urged them to look at that. He also urged Harbor District commissioners to let residents know if any future development does call for evicting Bayside RV’s current residents, noting that some were looking into obtaining attorneys.