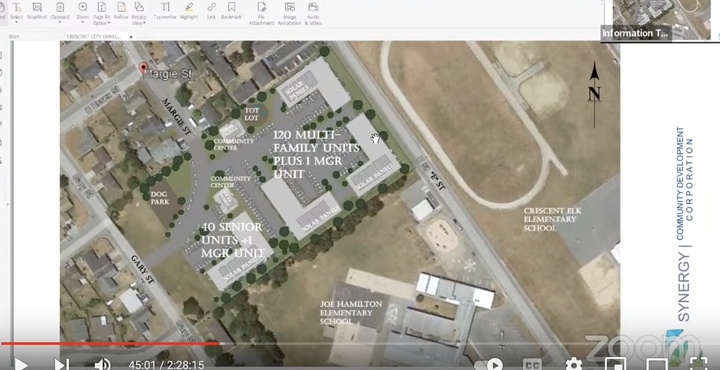 A Los Angeles-based nonprofit anticipates being able to break ground on a new 160-unit apartment complex near Joe Hamilton Elementary School in 2024, right after it secures state financing.

“We think this is a great opportunity working with the Housing Authority and with city staff to basically implement a plan where we can develop 160 residential units,” he said. “For the seniors, we will have one- and two-bedroom apartments. We’ll have two-, three- and four-bedroom apartments for families.”

Synergy will submit a bond application to the California Housing Finance Agency in May 2023, Rice said. He anticipated the state issuing bonds on or before Feb. 19, 2024. Rice said the senior apartments could be finished within 12-14 months of that 2024 date.

The nonprofit is also pursuing funding through the Department of Housing and Community Development and the California Tax Credit Allocation Committee, according to the city’s staff report.

Rice said a resolution the Crescent City Housing Authority Board of Directors approved in September helped Synergy pursue a grant through HCD to conduct infrastructure improvements around the two parcels at Gary and E streets.

Forty of the vouchers will be used for senior housing and the remaining 30 will be for families, Miller said.

The rest of the units will be available to those who aren’t restricted by the Housing Authority’s income limits, Miller said.

“Project-based vouchers, they’re a good way to make your application for other funding sources attractive,” she said. “We picked 70 because it was a good number and we were trying to encourage large scale development.”

“This is a project that would benefit the community,” she said. “There are lots of people who would qualify to live at this location. This is really something that our community needs.”

At the apartments, rent will range from 30 percent of an individual’s income for those who are very low or extremely low income to 70-80 percent for those who aren’t being assisted through the Housing Authority, Rice said.

The entire apartment complex will be deemed affordable housing and will be part of Crescent City’s 6th Cycle Housing Element, Rice said.

“You have a number of properties that qualify at the very low (income range),” he said. “But there really are no properties at that missing middle for workforce housing — for teachers and people working a lot of jobs within the community”

At its Dec. 5 meeting when discussing the Housing Element, Councilors learned Crescent City would need to provide space for 189 housing units.

In other matters, the Crescent City Housing Authority Board of Directors approved changes to its written administrative plan, allowing it to increase the number of project-based housing vouchers it’s able to award.

According to Miller, the proposed change to the plan allows the Housing Authority to award an additional 10 percent to populations that are difficult to reach such as the elderly, homeless, disabled or veteran communities.

Miller said this change has to do with the potential award of project-based vouchers to the Legacy, the Del Norte County-owned permanent supportive housing program at the formal Coastal Inn & Suites in Crescent City.