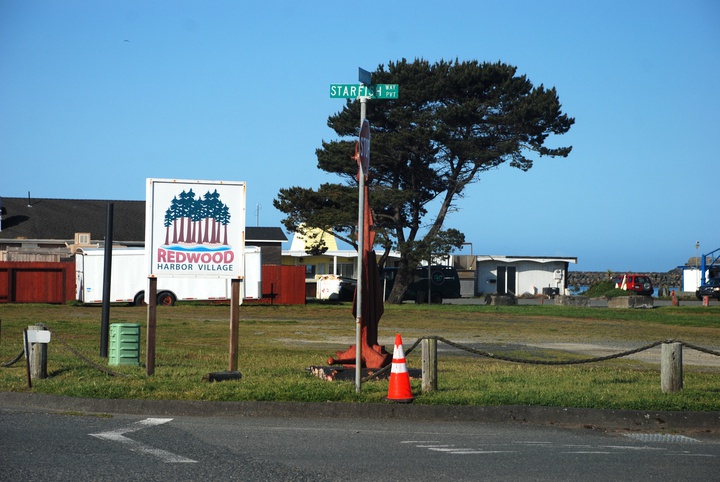 • As He Prepares Relocation Plans for the Harbor's RV Park Residents, Lemus Hopes to Open a Third Park Facing South Beach This Summer

Eight months after they approved ground lease agreements with developer Alex Lemus for the Crescent City Harbor District’s two RV parks, commissioners on Tuesday gave the green light for him to begin operating one of them.

Their 4-1 decision will allow Lemus, CEO of Renewable Energy Capital, to begin renovating Redwood Harbor Village. It ends an appraisal, or due diligence, period that was set to conclude when Lemus submitted a transition plan for the current residents at RHV and the harbor’s other park, Bayside.

On Tuesday, though Lemus had submitted plans to relocate Redwood Harbor Village residents to Bayside during the redevelopment project, Harbor commissioners said they wanted more clarity. The hangup was whether the Crescent City Harbor District would collect rent from Bayside residents as well as lease payments from Lemus for Redwood Harbor Village.

“I have a problem accepting payments from two people at the same time,” Commissioner Brian Stone told his colleagues.

Stone recommended tabling the issue, calling for a special meeting to be held before Jan. 1. Neither Lemus nor Crescent City Harbormaster Tim Petrick attended Tuesday’s meeting.

Newly-elected commissioner Gerhardt Weber voted against ending the due diligence period with Lemus. Weber said he had questions about the developer’s negotiations with the Harbor that he couldn’t ask in open session.

Lemus, CEO for Renewable Energy Capital, has been spearheading a project to redevelop Redwood Harbor Village and Bayside RV parks since August 2021. He plans to make the harbor-owned parks more attractive for short-term visitors, though the current residents were initially worried he planned to evict them to make way for the project.

The Crescent City Harbor District approved 25-year ground lease agreements with Lemus for Redwood Harbor Village and Bayside RV parks in April. REC would pay a monthly rent of $35,000 for Redwood Harbor Village and $33,333 for Bayside, according to the harbor’s staff report. Any changes that cost more than $10,000 would need to be approved by the Crescent City Harbor District, according to the lease terms.

The leases wouldn't take effect until after a 180-day due diligence period that would allow Lemus to further determine if the project was feasible and to work with the parks' current tenants on a relocation plan.

In September, Lemus said he wanted to finalize REC’s takeover of both parks at the beginning of 2023 and promised not to evict or raise rents on tenants in good standing for 12 months after the leases take effect.

In a Friday email to Petrick, Lemus said REC was “ready” for the California Department of Housing and Community Development to conduct an inspection of Redwood Harbor Village so his company could begin to operate the park.

Moving the current Redwood Harbor Village residents to Bayside is necessary so REC could safely complete the improvements needed to open the former park to visitors, Lemus said. That work is expected to start Feb. 1.

Lemus said he wouldn’t raise the rent on the current Redwood Harbor Village tenants and they could pick their space at Bayside. He said his company would also be willing to help them move their vehicles.

“This offer is subject to the residents’ rent being paid on time and adhering to all of the park rules and regulations,” Lemus told Petrick. “We are preparing a notice that we will hand deliver to every resident.”

On Tuesday, Harbor District Board President Wes White asked how he and his colleagues can approve a transition plan for Redwood Harbor Village without having a clear plan for Bayside. The port’s accounting manager, Thomas Zickgraf, was unable to clear matters up. He said it appears the Harbor District will receive rent from Lemus and rent from RV park tenants, but said “Bayside is a little influx.”

“I would urge you to essentially close out the open clause in the lease,” Zickgraf said. “Just to allow us to start moving forward to get us out of this limbo that we’re in.”

Zickgraf asked if commissioners could approve ending the due diligence period as a stand-alone motion and providing guidance on whether they supported Lemus’s proposal to move the Redwood Harbor Village residents to Bayside. Zickgraf said he and other Harbor District staff would return to commissioners in January with the details worked out.

Assistant Harbormaster Mike Rademaker said one of the details that needs to be finalized is how Lemus will pay the Harbor District for running the RV park during the construction period.

Commissioner Rick Shepherd said he was fine with approving ending the due diligence period and would be willing to accept Lemus’s proposal to move the Redwood Harbor Village residents to Bayside during construction.