Pedestrian Dies After Struck By Car in Harbor, Oregon » 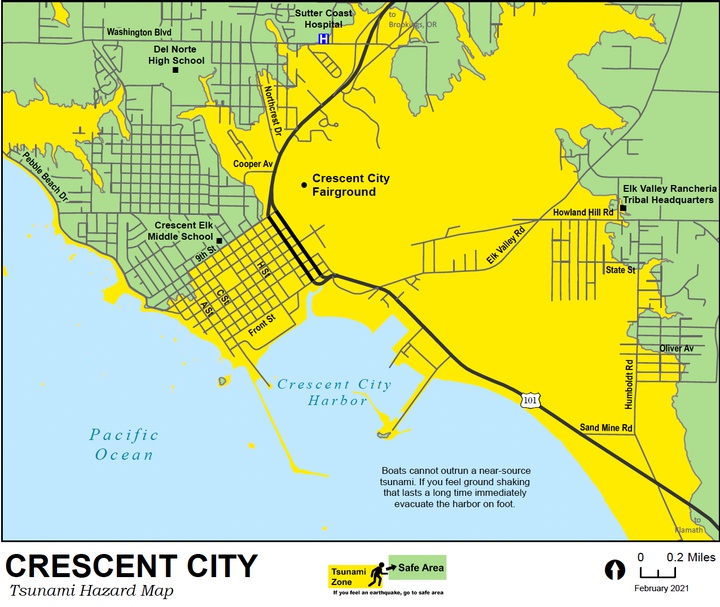 Crescent City and Del Norte County emergency officials will draw on lessons learned in 2011 and put new inundation maps to the test during a tsunami evacuation drill in October.

Scheduled for 10 a.m. Oct. 27, the drill is necessary for Crescent City to keep its designation as a TsunamiReady Community, county Emergency Services Manager Maia Mello told the Wild Rivers Outpost.

The drill also comes as Del Norte County prepares to seek its own TsunamiReady Community designation, according to Mello.

Authorities will disseminate door hangers and maps to residents, businesses and visitors, activate the emergency alert system and the sirens urging. The Flynn Center gymnasium will be a temporary evacuation point, Mello told colleagues from multiple agencies on Thursday. The county Office of Emergency Services will establish a shelter triplex at First Baptist Church, Foursquare Church and in the county gym, she said.

Communities renew their TsunamiReady designation every four years, said Redwood Coast Tsunami Work Group representative Ryan Aylward. To do this, they must hold some kind of preparation exercise, though it doesn’t have to be a full drill, he said.

Crescent City held tsunami evacuation drills in 2010 and 2014, the latter commemorating the 50th anniversary of the 1964 Good Friday Earthquake and Tsunami, which killed 12 people locally.

There had been a plan to hold a countywide evacuation drill, Aylward said, but COVID kept local emergency responders busy.
Other TsunamiReady communities and organizations in Del Norte County include the Yurok Tribe and Klamath Town Site as well as Redwood National and State Parks, according to Aylward.

Crescent City got lucky on March 11, 2011. It had roughly eight hours to brace itself for the surges coming from the Tohoku earthquake in Japan, City Manager Eric Wier said. Many citizens had participated in that 2010 drill and knew that if you’re in Downtown Crescent City safety is north of 9th Street.

Most of the surges also occurred at low tide, Wier said. Had it been otherwise, Crescent City could have had a repeat of the 1964 Good Friday Earthquake and Tsunami, he said. Twelve people died from the 1964 tsunami in Crescent City.

“When we were alerted in the middle of the night about the Japanese earthquake and impending tsunami, fortunately we had a little bit of time and we were able to plan for it,” Wier told the Outpost. “Once we got the information out, people knew what to do and their zone and it was fresh in their minds. It was a little different because it was a distant-source event.”

In October, Crescent City residents, business owners and visitors will prepare for a tsunami that can strike 10 minutes after they feel the earthquake, Wier said. The shaking can be strong enough to knock someone down, he said.

According to Aylward, the tsunami evacuation drill in October will be based on updated inundation maps released in 2021. These new maps place the Del Norte County Fairgrounds entirely within the inundation zone, a change from 2009 which had half the facility outside the hazard area, he said.

“You now need to go a little farther if you’re over there,” Aylward told the Outpost.

To be deemed TsunamiReady, a community has to have mapped its hazard zones, include information regarding its vulnerability to tsunamis in its FEMA-approved multi-hazard mitigation plan and install signs informing the public when they’re in a danger area and where the evacuation routes are.

Other steps a community must take to become TsunamiReady include conducting outreach to the public and education campaigns to their public schools. According to Aylward, the Del Norte County communities that haven’t reached TsunamiReady status yet have met much of the criteria. They just need to hold the evacuation drill, Aylward said.

Mello said she’s planning to schedule inundation zone evacuations for the county’s outlying communities next year. She pointed out that each coastal community, including Smith River and Fort Dick, have their own inundation maps.

Participation in the drill isn’t necessary, Aylward said. People can find out if they're in a hazardous area, assemble a Go Bag and ensure their furniture is anchored to the wall so it doesn’t fall over in an earthquake and practice their route.

“All you got to do is go for a walk,” Aylward said.