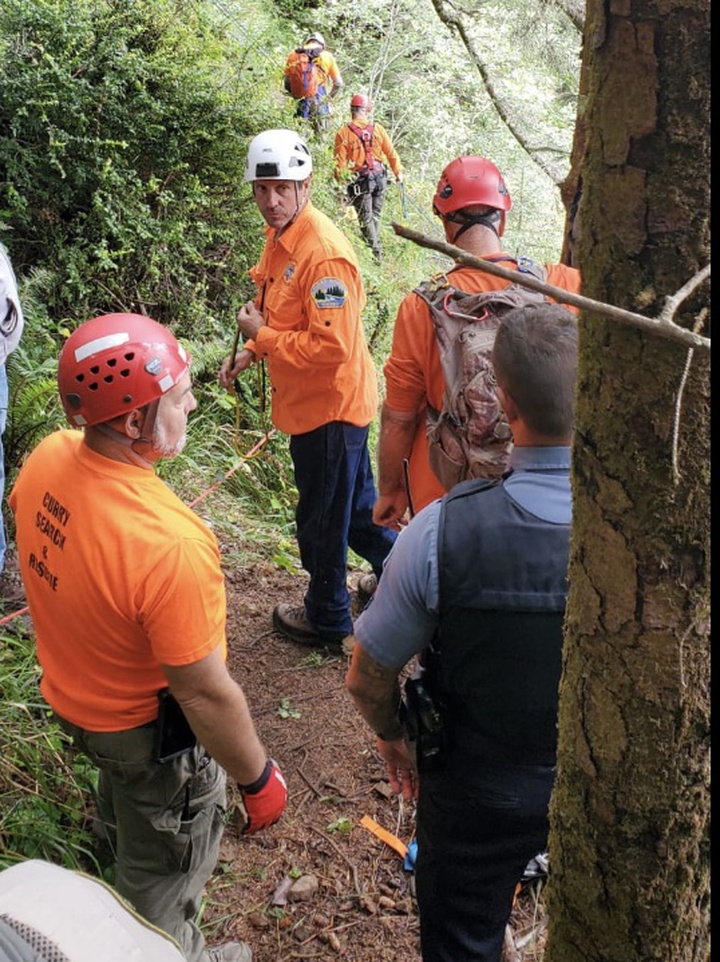 Emergency responders rescue a mother and her daughter from over the bluff south of Gold Beach on Wednesday. | Photo courtesy of the Curry County Sheriff's Office

Wednesday August 3, 2022, at about 11:33am, the Curry County Sheriff’s Office was notified by the Oregon State Police of a call regarding a person over the side of a cliff about twenty miles south of Gold Beach near milepost 346 off U.S. Highway 101.  State Trooper, Sergeant Brandon Smithers was in the area at the time, hiked down the trail and relayed that there was a young female who had slid about thirty-five yards down off a trail over the bluff and was complaining of leg pain.  Sergeant Smithers relayed that the SAR rope team would be needed.

Sheriff’s Deputies and Search and Rescue members responded to the area.  Cal Ore Life Flight Ambulance, Brookings Fire and Cape Ferrelo Fire were also paged to assist.  When Deputies arrived on scene, they found that there was also another female stuck over the bluff who needed to be rescued as well.  The two victims were identified as fourteen-year-old Claire Berndt and her mother, forty-nine-year-old Tara Berndt of Northfield Minnesota.  It was estimated that Claire was just over one hundred feet below the trail and Tara was about thirty feet below the trail.  SAR members arrived and set up rope systems and rappelled down to both the victims and were able to bring them both back to safety.

Claire Berndt told rescuers that she and her brother thought they could climb down from the trail to the beach below, but she started sliding and caught herself on some brush (poison oak) after sliding about fifty feet.  There were six members of the Berndt family hiking the trails and after Claire had fallen, her mother Tara had climbed down the hill and attempted to reach her with a tow strap but found herself in a predicament as well.

After being brought back to the top by SAR members, both Claire and her mother, Tara were attended to by the Cal Ore ambulance crew but declined any medical assistance after being checked out.

The Curry County Sheriff’s Office and Search and Rescue team would like to thank the other agencies who assisted in this rescue.  Claire is one lucky young lady that she was able to stop herself from falling all the way down the beach, as this could have turned out to be a recovery instead of a rescue.