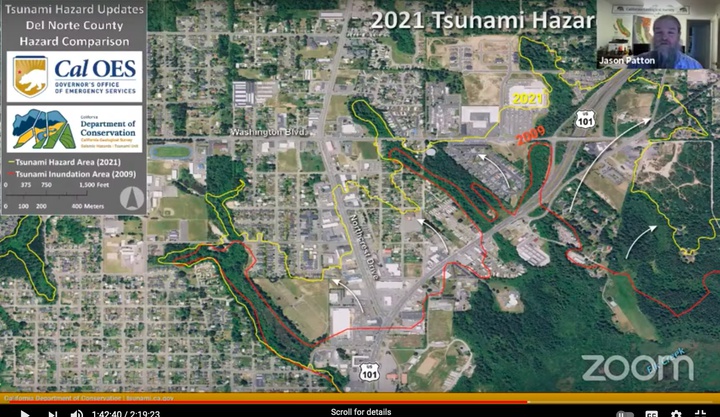 Introduced to the Del Norte County Board of Supervisors on Tuesday, the new maps take into account better science and modeling as well as lessons learned from the 2011 Tohoku earthquake and tsunami in Japan.

“Instead of being a 500-year return map it’s been updated to a 1,000-year return map so we don’t get blindsided like what happened in Japan,” said Del Norte Emergency Services Manager Kymmie Scott, chair of the Redwood Coast Tsunami Work Group. “(The hazard) didn’t change drastically, but there are some areas going up the 101 in town where it goes further in and in the Bertsch Tract where it wasn’t before. There are also areas in the Klamath River valley where it wasn’t before.”

Now that the Board of Supervisors adopted the new tsunami hazard maps, which replace maps from 2009, Scott’s office and the Redwood Coast Tsunami Work Group will conduct a six month long public education and outreach campaign. This will incorporate social media, radio broadcasts and an outreach trailer for when it’s safe to be outside, she said.

The maps will be released to the public in March, to commemorate the 10-year anniversary of the earthquake and tsunami in Japan, Scott said. California will also observe Tsunami Education Week March 22-26, which will also include public outreach, she said.

“On the 24th, which is that Wednesday, it’ll be the live-code siren test, which people are familiar with,” she said. “On the 24th, it’ll be not just sirens, we’ll be activating the whole emergency alert system — siren, NOAA radio broadcast, an Everbridge push, a Civil Air flyover, people will see it on TV — the way they would if it were a real tsunami.”

The year will culminate with a full-scale evacuation exercise in October, Scott said. This will include activating Del Norte County’s Emergency Operations Center and urging the public to conduct an evacuation, time it and see how long it takes them.

The updated tsunami hazard maps will play a vital role in that exercise, Scott said.

“We just want everybody to get muscle memory of where those new hazard lines are,” she said. “It’s been proven over and over again if you practice, when a disaster happens and you’re not thinking clearly, it’s a lot easier to fall back on what we practiced. This is the tsunami equivalent of ‘duck and cover.’”

On Tuesday, Scott presented the maps to the Board of Supervisors with representatives from the California Office of Emergency Services and the California Geological Survey. She was also joined by her fellow co-chair on the Redwood Coast Tsunami Work Group, Ryan Aylward, of the National Weather Service’s Eureka office.

Updating the tsunami hazard maps was an 18-month process, Scott said, and included input from local first responders and other emergency preparedness representatives.

According to Jason Patton, engineering geologist for the California Geological Survey, maps are being updated statewide and are based on both distant-source and local-source tsunamis. In Del Norte County, the Cascadia subduction zone would generate local tsunamis. The new maps are also based on higher resolution elevation data as opposed to the low-resolution topographical maps of 2009, Patton said.

Noting that the new maps now name an area near the intersection of U.S. 101 and Washington Boulevard a hazardous area, Board Chairman Chris Howard asked about evacuation routes.

“Basically our intersection of Washington and Highway 101 was within the runup zone for a tsunami,” Howard said. “That causes a little concern as it’s our four-lane highway, so to speak, north out of town. I”m assuming our OES and others are really taking this into consideration when planning evacuation routes.”

Scott noted that though the 2021 maps depict a worst case scenario, most of the tsunamis that will impact Del Norte County will be lesser events.

“We plan our actions based on a set of criteria with different levels of potential inundation,” she told supervisors. “We don’t want to evacuate more people than is necessary, but we do want to have the information and plans in place in case we do face the worst case scenario.”

Del Norte OES may not evacuate everyone in the areas within the hazard boundaries on the new maps during a distant-source tsunami, Scott said. The California Geological Survey will let local emergency personnel know what to expect if a tsunami is on its way, she said.

“We’ll have a series of lesser lines that’ll be developed where we can evacuate the appropriate amount of people,” she said.

Scott said she and her colleagues at CalOES, the California Geological Survey and the Redwood Coast Tsunami Work Group present the new hazard maps to the Crescent City Council on Feb. 16.

People can also check out a virtual fair and other information about local earthquake and tsunami hazards by visiting the Redwood Coast Tsunami Work Group’s website, she said.