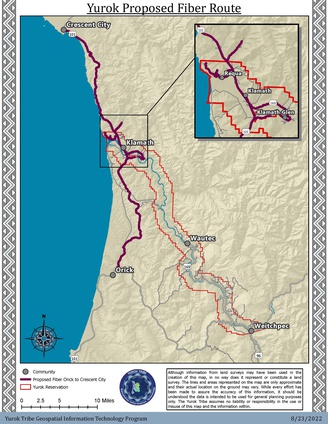 The Yurok Tribe will use $61 million in National Telecommunications and Information Administration grant dollars to bring more efficient internet to Crescent City and Del Norte County both on and off reservation.

With this Tribal Broadband Connectivity Program grant, the tribe’s Telecommunications Corporation aims to install 62 miles of middle-mile fiber optic cables between Orick and Crescent City. It will connect Requa and Klamath Glen homes to the main line via last-mile spurs.

The Yurok Tribe’s goals are to provide high-speed broadband to nearly 1,000 homes, 110 businesses and 18 anchor institutions. Installing the necessary infrastructure is projected to produce nearly 200 local jobs, according to a tribal news release.

“This is huge for Indian Country. This is huge for the Yurok Tribe,” Chairman Joseph L. James said during a press conference in Hoopa on Thursday. “Not only will we be able to provide for broadband internet on the reservation located in Humboldt and Del Norte County, but also the North Coast along the highway.”

The $127 million the National Telecommunications and Information Administration awarded to both the Yurok and Hoopa Valley tribes will connect 2,000 households to high-speed internet, said Andy Berke, the NTIA’s special representative for broadband.

Improving Internet access nationwide was a goal of the most recent infrastructure bill, which appropriated $65 billion toward that endeavor, according to Berke. Of that funding, $14 billion will address affordability, particularly for those who live on tribal lands. Berke said residents making less than 200 percent of the poverty level will receive a voucher of $75 a month for Internet.

Berke said the NTIA is also working with the State of California and other states in the country to make a list of every address that’s not connected to the Internet.

U.S. Rep. Jared Huffman, whose district includes Humboldt and Del Norte counties, also acknowledged that both the Hoopa Valley and Yurok tribes were underserved when it comes to access to high-speed broadband.

The $127 million grant to both tribes shows that the country is “rapidly moving towards digital life with teleworking, remote working and Telehealth visits becoming the new normal,” Huffman said through his district representative, John Driscoll.

“This transition is highlighted in how access to high speed broadband isn’t a luxury, it’s a necessity,” Huffman said. “But there’s still a staggering digital divide between urban and rural America especially when it comes to our underserved tribal communities.”

About 90 percent of the Hoopa Valley Tribe’s population doesn’t have adequate Internet access, said Linnea Jackson, who represents the tribe’s public utilities district. That’s largely true for many on the Yurok Reservation as well, she said.

They also don’t have fiber-optic internet and rely on wireless service, Jackson added. Though the Yurok Tribe recently built a cell phone tower on their land, tower infrastructure is largely lacking, she said.

In its news release Thursday, the Yurok Tribe stated that telecommunications companies have made few investments in the region. The tribe stated that the lack of reliable internet is the “single biggest impediment to progress” in public health, education, economic development and emergency communications.

“There are numerous reservation residents who lack access to cellular and internet services,” the Yurok Tribe stated. “These residents, which include tribal elders, cannot call 911, participate in distance learning or schedule Telehealth appointments.”
Both the Yurok and Hoopa Valley broadband projects will incorporate fiber-optic cable and fixed wireless infrastructure, Berke said.

“Today we went up and saw the only tower on these particular lands, but a second one will be installed as well,” Berke said. “Yesterday we drove around and saw what solutions will be deployed in the neighborhoods around the Yurok land. So this is a complex set of ways you have to get internet to people.”

In 2020, the Yurok Tribe installed a 150 foot cell phone tower at Water and elevated five existing telecommunication towers, according to its news release. It is also a partner with the Klamath River Rural Broadband Initiative (KBBI) led by the Karuk Tribe, which aims to extend a fiber optic cable from Orleans to Orick.

The KBBI project will complement the fiber optic cable between Orick and Crescent City, according to the tribe’s news release.

The Yurok Tribe will also train community members how to install, maintain and operate broadband equipment in an effort to help them gain “well-paying jobs” within the tribe and the private sector.

“To me, this is one of the most important parts of this project,” Tribal Councilor Ryan Ray said in a written statement. “This project will also level the playing field for tribal entrepreneurs, who will be able to make their amazing products online for the first time.”

Yurok Tribal Vice Chairman Frankie Meyers said that not only will the fiber optic middle-mile network between Orick and Crescent City increase internet speed, it represents a partnership with federal, state and county entities.

“We’re changing the way we do business with tribal communities,” he said. “Tribal communities and tribal governments have a lot to offer and this award highlights the relationships we’ve built over the years both with the county, with the Hoopa Tribe, state and federal partners.”