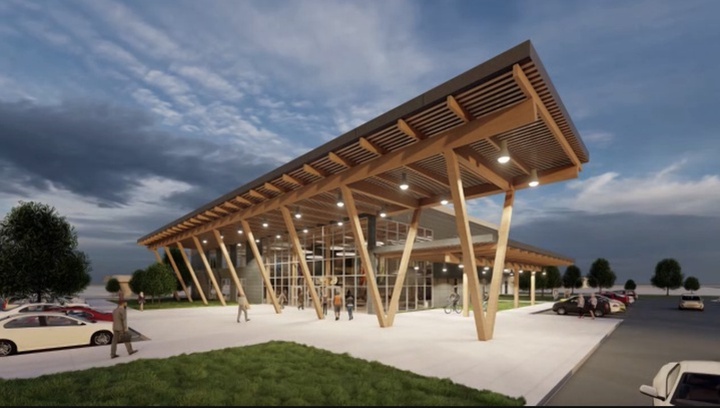 Nick and Lisa Rail and Partnership for the Performing Arts got a boost from the Del Norte County Board of Supervisors on Tuesday in the form of a joint letter of support.

Crescent City Councilors are expected to officially sign onto the letter next month, according to District 3 Supervisor Chris Howard.

“What this does is direct some energy and staff time to the Performing Arts Center,” Howard told the Rails. “We hope to work with you going into the future with this letter that will help direct some synergies that may come into effect as we work towards this very important project for our youth.”

The Board’s letter is the official support Howard sought when Nick Rail, who founded a Southern California music retail chain, introduced the project to supervisors in June.

The facility will seat 1,000 people and will be situated between Del Norte High School’s band room and Washington Boulevard. Its estimated price tag is $42 million. The doors will open January 2028, according to Rail, who, along with his wife, has pledged $1 million toward the project.

The Rails formed the Partnership for the Performing Arts, a nonprofit organization, which will pursue state and federal grants and contributions from private foundations and donors. The Partnership for the Performing Arts entered into a memorandum of understanding last year with Del Norte Unified School District, which is providing the land for the project.

In its letter, the Board of Supervisors praises the Rails’ passion and generosity to the community, which includes donating brand new instruments, helping to refurbish the Crescent Elk Auditorium and establishing a music instrument repair program at the high school.

“The Del Norte Center for the Performing Arts will be transformative for the arts in education and will also allow Del Norte County to showcase the local talent within our very own community,” the letter states. “In addition, it could be a travel destination for artists and performing groups from outside the county. Crescent City is a community rich in culture and the arts and is beginning to embrace these qualities as economic opportunities.”