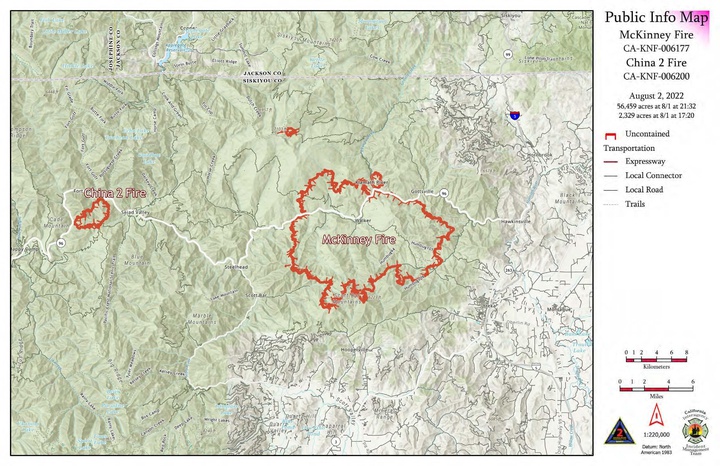 Map of the McKinney and China 2 fires as of Aug. 2. | Courtesy U.S. Forest Service

Sheriff's deputies also encountered a member of the press who had escorted a citizen into the evacuation zone and allegedly disturbed property one of the decedents was later discovered at. According to the sheriff's office, "the media televised the information prior to law enforcement properly processing the scene and notifying the (victim's) family."

On Monday, August 1, 2022, Siskiyou County Sheriff Deputies contacted members of the MEDIA who were on private property inside the burn area of the #McKinneyFire. Additionally, the media crew had escorted a citizen into the evacuation zone in their vehicle, an unlawful abuse of press privileges.

This was a home in which investigators and search teams had not yet processed. One of the deceased persons was later confirmed to be on this property that media had disturbed. Further, the media televised the information prior to law enforcement properly processing the scene and notifying the family.

This is unacceptable and disrespectful to fire victims and their families and will NOT be tolerated.

𝘾𝙖𝙡𝙞𝙛𝙤𝙧𝙣𝙞𝙖 𝙋𝙚𝙣𝙖𝙡 𝘾𝙤𝙙𝙚 409.5(𝙙) grants legitimate press unlimited access to scenes of disaster, riot, or civil disturbance. It excludes CRIME SCENES or areas being treated as such. It further excludes media from entering locations that interfere with incident operations.

As a reminder, law enforcement will be checking identification of ALL individuals asserting to be members of the media at the various road blocks guarding the evacuation zone.

Because the cause and origin of the fire are still under investigation, the area affected by the McKinney Fire is being treated as a CRIME SCENE to secure and preserve the area for investigators and protect any potential evidence.

An ABC News Report on Monday was filmed on the property of a Klamath River woman whose uncle was found deceased.

The McKinney Fire is currently at 56,165 acres and the nearby Yeti Complex is at 2,430 acres, according to the National Forest Service. The cause is still under investigation.