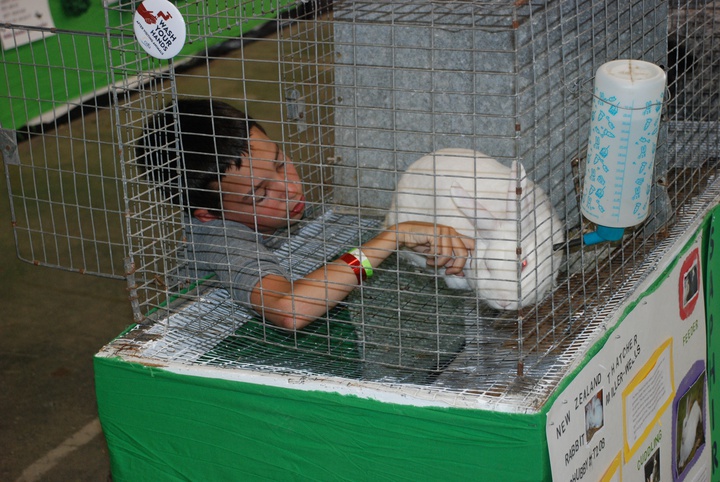 Del Norte’s annual county fair officially kicks off on Thursday, but youngsters in 4H, FFA and Grange have already brought their animals to the fairgrounds.

Judges will take a gander at 135 market animals this year, fairgrounds CEO Kimberly Floyd told the Wild Rivers Outpost. There are pigs, goats, lambs, steer, chickens, turkeys, rabbits, ducks and geese. And one entry Floyd says the fair hasn’t had since the 1950s or 60s — quail.

“The little girl was very informative,” Floyd said of the young contestant, adding that judges will be using the same criteria for quail as they use for other poultry, though they won’t be up for auction on Sunday. “She brought in 25 quail — it was pretty cute to see.”

The final weigh-in for most market animals will be conducted Wednesday along with judging for many of the non-animal exhibits. For kids entering animals in the fair, the goal is to make it to the Junior Livestock Auction on Sunday.

“The best thing about our community’s fair is that it truly is a community event,” said John Pritchett, a member of the 41st Agricultural District Board of Directors. “It is the time when old friends see each other and share memories, when our young people learn the value of hard work at the Junior Livestock Auction and when we are entertained and delighted and thrilled.”

Featuring the theme “Neon Lights and Country Nights,” the Del Norte County Fair gates open at 8 a.m. Thursday. The first few events are the goat show in the Ace Pavilion and Jazzercise with Sabina Renner at the Pond Stage, both at 9 a.m. Kids 12 and under get in free that day.

Opening day will close with the Austin French Christian Concert at 6 p.m. in the Tri-Counties Bank Arena, Floyd said.

Friday is Senior Day when people ages 60 and over get into the fair for free. Renner will return with Jazzercise at the Pond Stage at 9 a.m. while the Poultry Show will be held in the Rabbit Barn. The Coast Central Credit Union Car Show will be held from 10 a.m.-3 p.m. at the Amphitheater Stage.

Chase Bryant will perform in the Tri-Counties Bank Arena at 7 p.m. Friday — that will be the fair’s big concert, according to Floyd. Corvallis, Oregon country musician Jackson Michelson will open for Bryant at 6 p.m.

On Saturday, the Ashley Hartwick Memorial Barrel Race kicks off at 8 a.m. This event will run through the afternoon, giving way to the Challenge of the Champions Bulls & Barrels event at 4 p.m.

“This year we have added an adult cattle scramble with a Jurassic twist,” Floyd said. “Ten different adults will go and chase after cows and they will be dressed up in blow-up dinosaur (costumes). There will be two winners and they’ll win $100 cash.”

Veterans and members of the military will get in free on Saturday.
Sunday the fair closes with the Junior Livestock Auction at 1 p.m. in the Ace Pavilion and the Tuff Trucks & Pit Bikes in the Tri-Counties Bank Arena at 2 p.m.

A new event this year are the PeeWee Pit Bikes for kids and the Hillbilly Wheel Barrow Race, Floyd said.

“They have to race through the Tuff Truck Track and there’s a cash prize on that one as well,” she said.

It wouldn’t be a fair without a carnival. People can get wristbands now for $30 per day or $90 for four days, Floyd said. The price for a daily wristband increases to $40 on site, she said.

This year, a new carnival will be in town, Brass Ring Amusements’ Midway of Fun based in Fair Oaks, California.

“The Star Tower can’t be here, but he’s replacing that with the Sea Dragon and then he has Teacups and a carousel and his ferris wheel is way bigger than what we had before,” Floyd said. “There’s Jalopy Junction, the Zipper, Go Go Gator — he’s got a lot of really cool stuff. We’re getting a lot more rides than what we had before.”

For more information about the fair, visit www.dnfair.org.