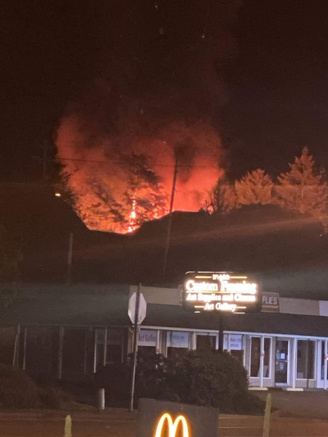 Brookings resident Tonia Thayer says her family received an outpouring of support after a fire destroyed her home. Photo courtesy of Tonia Thayer.

A Brookings family is picking up the pieces after a fire officials are investigating as suspicious destroyed their home Saturday night.

Tonia Thayer said she had arrived home from a trip to Medford for school supplies at about 10:30 p.m. to find her house at 750 Valley Street fully engulfed in flames and her family standing across the street.

Thayer, who has rented the home since May 2019, said her 19-year-old son and husband were home at the time and were able to evacuate. She said her daughters accompanied her to Medford. However, their four cats and eight newborn kittens did not survive nor did several family heirlooms, she told the Wild Rivers Outpost.

“We lost our family ashes — my grandmother’s ashes, my husband’s father’s ashes — my mother’s hand-stitched wedding gown made by my great grandmother and a family heirloom quilt,” Thayer told the Outpost. “We have received an outpouring of clothing donations, which has been such a blessing. We have a travel trailer, which has been obtained for our use till more permanent housing can be obtained.”

Firefighters with the Brookings and Harbor fire departments arrived on scene at 10:56 p.m. to find the home fully engulfed, other structures threatened and residents evacuated, according ot a City of Brookings news release Thursday.

Firefighters gained the upper hand at about 11:40 p.m. and allowed residents of the threatened structures to return home. No one was injured, according to the news release.

According to the Brookings news release, the fire appears suspicious and the Brookings Fire Department and Oregon State Fire Marshals Deputy are continuing to investigate the case.

“We are so appreciative of the outpouring (of) support of both Brookings and Crescen tCity residents and friends and family nationwide,” she said. “We only hope to pay it forward some day in some way.”