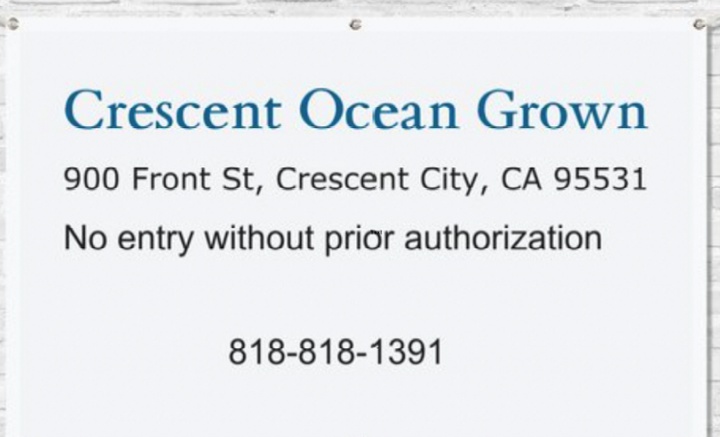 Crescent Ocean Grown's proposed sign would be about 8 feet square and affixed to its entrance on I Street. Courtesy of Crescent City

Crescent City Councilors could see no reason to deny a conditional use permit for a cannabis cultivation operation proposed for the old Turf Club despite objections from a handful of residents about odor and the operation’s proximity to Beachfront Park.

Noting that Crescent Ocean Grown owner, Artashes Mamadjanyan, has promised to comply with the city’s commercial cannabis ordinance, Councilors said Tuesday the operation’s opponents should have spoken out when they were vetting and crafting those regulations.

“This wasn’t something that staff brought us and we rubber stamped,” Mayor Pro Tem Blake Inscore said. “It was over a two-year span that this was vetted in public meetings. I believe we vetted it as a Council at least four times. I don’t remember there being a single person that called this use out and said, ‘Don’t you dare allow this to be done in the city limits.’”

The City Council’s vote came after a public hearing to consider an appeal from former supervisor and city resident Roger Gitlin, who contested the Planning Commission’s Aug. 12 decision to allow the development of Crescent Ocean Grown to proceed.

The Council’s job was to determine if Crescent Ocean Grown’s conditional use application complied with the Crescent City Municipal Code, City Attorney Martha Rice said. Councilors had already set policy when it adopted the commercial cannabis ordinance in April 2020, she said.

“Tonight the question is really simply whether this application meets those requirements,” Rice said. “To make a decision that’s not supported by the facts in evidence is what’s called an abusive discretion and may be challenged in court. If somebody were to appeal your decision tonight, whatever it may be, they would have to say that your action was an abusive discretion, meaning that it was not supported by the facts in record.”

After nearly six months of debate, the Crescent City Council adopted an ordinance that allows indoor cultivation, manufacturing, processing, distribution, micro-businesses, testing and retail in the city’s commercial areas, including the waterfront, as well as its highway service district.

The former bar at 900 Front Street consists of about 2,460 square feet. According to Garry Rees, a consultant with SHN who helped the city craft its commercial cannabis ordinance, said the area is zoned waterfront commercial, which is consistent with the ordinance’s requirements.

Of the building’s 2,460 square feet, Crescent Ocean Grown would use about 1,851 for cannabis cultivation, Rees said. Roughly 600 square feet would be used as storage and to accommodate a man trap, a security feature the city required to guard against unauthorized entry, he said. Normal business hours would be from 8 a.m.-5 p.m., though processing outside those hours may be necessary, Rees said.

Since Mamadjanyan is applying for one conditional use permit within the city and the proposed operation less than 2,000 square feet and fully enclosed within a structure that will be locked, he is complying with the city’s ordinance, Rees said.

Crescent Ocean Grown’s sign also complies with the city’s ordinance, Rees said. The sign will be 4-feet by 2-feet and will be affixed to the building’s entrance off I Street. Businesses are allowed up to 100 square feet for signage, according to Rees.

“The location of the proposed use has been sitting vacant for several years and if the conditional use permit was approved by the Council properly it would be converted to a use that’s appropriate within the general plan,” Rees said.

The city’s ordinance restricts indoor cultivation to 2,000 square feet. Retailers cannot operate within a 600-foot radius of a K12 school or daycare center. A commercial cannabis proprietor cannot advertise within 1,000 feet of a playground, daycare center, youth center, community use center or public library, according to the ordinance.

The commercial cannabis operator must obtain a conditional use permit, a $15,000 surety bond, submit a $1,000 deposit to the city and obtain active enrollment in the state’s track and trace program, according to the city’s ordinance.

Gitlin, an opponent of the county’s efforts at drafting a commercial cannabis ordinance as a county supervisor, said when he learned the owner of Arts Barbecue was seeking a use permit for 900 Front Street, he assumed it would be another restaurant. He not only protested the proposed operation across the street from Kid Town and in “the heart of the retail district,” he took issue with it being within city limits at all.

“I don’t doubt for a moment that indoor cannabis growth in a rural setting away from the public, away from Downtown Crescent City, would be applicable on the growth of marijuana. I don’t quibble over that,” he said. “I am quibbling over what I presume would be a really good barbecue sandwich place (and) instead we’re giving an indoor marijuana growth opportunity. I oppose it. I hope the City Council would do likewise.”

Other opponents of the proposed location for Crescent Ocean Grown included Ernest and Linda Perry, who were concerned about the odor and noted that in addition to using a filtration system, the smell needs to be exhausted high into the air, which may be difficult to accomplish on a foggy day with little wind.

City resident Natalie Fahning also objected to the proposed cannabis cultivation operation, saying that she “100 percent guarantees” that some odor would waft into the soccer fields and Kid Town playground across the street.

“Don’t make Beachfront Park the showcase for the drug users,” she said. “The law abiding citizens are going to have to go elsewhere.”
Resident Steven Jackson and Councilor Raymond Altman countered their arguments by pointing out that the Turf Club had been empty for several years.

Jackson also noted that the Turf Club’s sign was “plastered all over that building.”

“It’s no hidden secret for what that business is,” he said. “When a business comes in and says they want to do an 8 square foot, not 8 by 8, but 8 square foot when they’re allotted over 100 square feet of signage on a property and it’s going to be off the main street and really out of sight, it’s a business’s right to follow the ordinance and display their business name with their phone number in a very minimalist way.”

Altman asked if the public would rather the building continue to be boarded up.

“Are we to stand on our head while walking on our feet because what our community has told us is they want new businesses, want jobs, want new industry and you’re telling me you now you would rather have this old liquor establishment boarded up and continue to look at these boarded up buildings all over town?” Altman asked.

Pointing out that he wasn’t on the City Council when it adopted the commercial cannabis ordinance, Smith said he didn’t think it was his place to tell a property owner what to do with their business. But he was concerned about the potential impact Crescent Ocean Grown would have on children.

“Would I want my kid working there? Absolutely not,” Smith said. “I wouldn’t want my kid to work in a pot shop or cultivating marijuana.”

Greenough said he too opposed marijuana and its use, but he didn’t see grounds to deny Mamadjanyan’s conditional use permit.

“As far as I’ve seen, the application was well written and they are following the law to the letter as it’s written,” Greenough said. “I don’t see an avenue for me to deny them. If it comes to light that they are unable or unwilling to follow the law and there’s small and people are getting marijuana out of place or their security’s not up to snuff, they will not be doing business in the City of Crescent City.”

According to Public Works Director Jon Olson, Crescent Ocean Grown’s conditional use permit will be subject to annual review. There’s also an application process for obtaining an industrial wastewater discharge permit, which includes staff collecting data from the applicant, he said.