Hike and Bike Day Through Prairie Creek is Back » 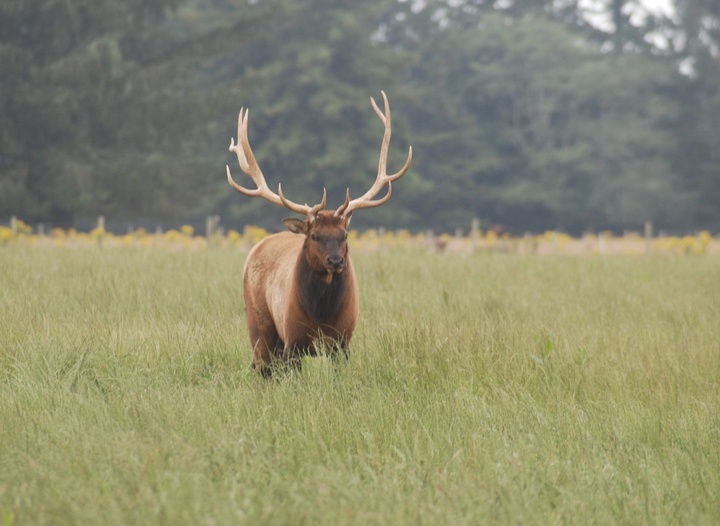 A debilitating hoof disease that showed itself in three Del Norte County elk last year has been confirmed in more than 25 other animals, state wildlife biologists say.

After working with hunters to provide samples, wildlife biologists say the index herd of Roosevelt elk infected with treponeme-associated hoof disease in California is in the Fort Dick-Smith River area, though sporadic cases have shown up elsewhere in Del Norte and Humboldt counties.

“We’re working to reduce the density of elk in conflict areas, one of those being in the area where the index herd exists,” Carrington Hilson, an elk biologist with the California Department of Fish and Wildlife, told the Wild Rivers Outpost on Tuesday. “We’re working in conjunction with our hunters. Last year we had 97 percent hunter compliance, basically 97 percent of our hunters that successfully harvested an elk gave us samples so we could examine those hooves and send them off for further diagnostic testing where it was warranted.”

Treponeme-associated hoof disease, or TAHD, is associated with a strain of bacteria that causes digital dermatitis in livestock, CDFW wildlife veterinarian Emma Lantz told Del Norte County supervisors in April 2020. First described in Washington in 2007 and 2009, TAHD can lead to deformed hooves, lameness and overall poor health in elk. It has since spread to elk in Oregon, Idaho and California.

In California, TAHD has been confirmed in Roosevelt elk, Lantz said. There have also been confirmed cases in Rocky Mountain elk in other states, she said.

Since the first two detections of the disease last year, CDFW has started a comprehensive surveillance plan for the disease and will soon becoming out with the results of its first year, Lantz said. The plan also includes potential options for managing the disease, she said, though biologists are still looking at foundational questions such as how is TAHD transmitted.

“One of the primary risk factors that’s been proposed is high density of animals, that may contribute to animals developing the disease,” Lantz said. “Either euthanizing the animals for welfare if they’re obviously lame or limping and increasing the number of (hunting) tags available in an area are options. Those can help us both out.”

Scientists at Washington State University have discovered one way TAHD may spread. According to research conducted by Professor Margaret Wild and her students in WSU’s Elk Hoof Disease Research Program, healthy elk can contract the disease by walking on soil contaminated by other infected hooves.

“Our preliminary results indicated that TAHD can be transmitted to otherwise healthy elk through exposure to soil contaminated with hooves from affected elk,” Wild said in a WSU news release Sept. 16. “It is still unknown if other factors such as an elk’s nutritional condition or exposure to chemicals promotes the disease, but our findings show the infection can occur without these added insults.”

Wild and her students studied six healthy elk calves captured from Central Washington and brought to a specially built biosecure stalls with their own feeders and waterers, according to WSU’s news release. Wood shavings were used as bedding for one portion of the stall, while soil from an herbicide-free region near Mt. St. Helens covered one-quarter of it, according to the release.

WSU researchers exposed four of its six elk calves to TAHD-infected hooves, according to the news release. The other two elk were exposed to non-contaminated hooves.

“On treatment days, hooves were thawed, sampled for confirmatory diagnostic testing and then minced and mixed with soil to make a treatment mixture,” WSU’s news release states. “The mixture was then placed in the elk’s pen. To ensure contact between the foot and the contaminated soil, about a teaspoon of the preparation was also placed the toes on each of two feet on each elk and it was held in place with a wrap.”

The elk were treated in two- to four-week intervals between October and March, according to the WSU news release.

Researchers noticed early lesions between two to three months of treatment and by four months, all four had moderate-grade infections “indistinguishable from those found in wild elk.” The four treated elk were euthanized, according to the news release.

The two elk treated with a soil mixture from non-contaminated hooves were not infected with TAHD, according to the news release.

Having research and data showing that TAHD is transmitted via contaminated soil is a huge step toward understanding the disease, Lantz said. But that type of study can only be conducted at a research facility like WSU, she said.

Since there isn’t a test that can be conducted, diagnosing TAHD in wild elk is difficult, Lantz said. Determining whether an animal is sick includes a visual inspection of their hooves as well as a microscopic examination, which requires deceased animals, she said.

“That’s where hunter compliance, in terms of bringing us samples, has been invaluable throughout the state,” Lantz said. “They’ve allowed us to sample a heck of a lot more animals than we would have been able to otherwise.”

According to Hilson, biologists also use spotting scopes and binoculars to examine elk herds and identify infected animals. Those who are in an advanced stage of the disease often have hoof capsules that have sloughed off, she said. Though it’s easy for biologists to determine that the elk is suffering from poor health, there’s no way to be sure if it’s infected with TAHD until samples are sent to the lab, Hilson said.

Carrington and Lantz also ask the general public to keep an eye out for lame or limping elk and submit a mortality report on the CDFW website.

“Once we get those reports, we can send them out to a local unit biologist and they can go investigate,” Lantz said. “If they see an animal and it’s a very severe case or a serious welfare issue, we can target those ones for either euthanasia or just monitoring.”