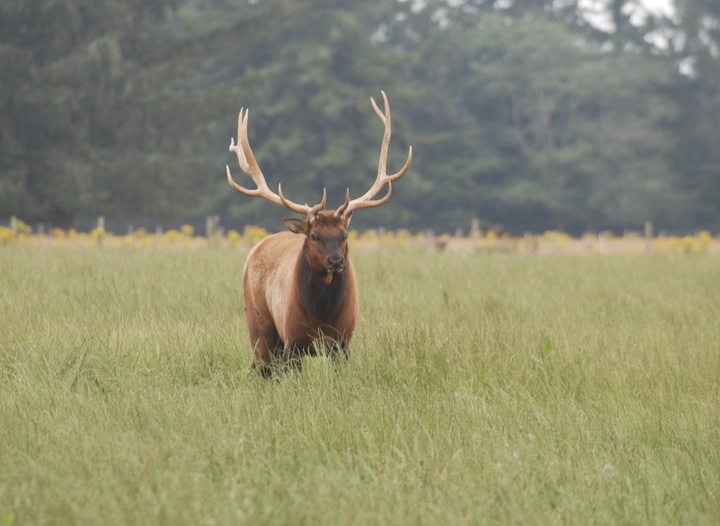 A male Roosevelt elk shows off his antlers in a local field. Photo: Jessica Cejnar

State wildlife biologists are hoping for a successful elk hunt this year as they continue to study a debilitating hoof disease that has shown up in Del Norte County recently.

Evidence of treponeme-hoof disease was confirmed in April on hooves belonging to three Roosevelt elk from Del Norte County, according to wildlife veterinarian Emma Lantz. Two of those animals were hunter-harvests taken in December and a third was euthanized in January, she told the Del Norte County Board of Supervisors on Tuesday.

A necropsy was performed on the third animal, Lantz said.

Treponeme-associated hoof disease, or TAHD, is associated with a strain of bacteria that cause digital dermatitis in livestock, Lantz said. Scientists received increased reports of lameness in elk starting in the 1990s, but the disease was first described in Washington in 2007 and 2009. It has since spread to elk in Oregon, Idaho and, now, California, Lantz said.

“We’re still getting an understanding in the landscape,” she said. “Diagnosis is post mortem, so we need dead animals to sample for TAHD. We can look for lameness and limping when the animals are alive.”

According to Lantz, there’s currently no evidence that TAHD has been transmitted between elk and cattle, though treponeme-associated diseases are present in livestock. However, she said, CDFW is still working with its counterparts in Oregon and Washington to determine whether TAHD can be transmitted between species.

Since TAHD can only be diagnosed in dead animals, the California Department of Fish and Wildlife staff in the northern region will conduct surveillance from “hunter-harvested elk” taken in Del Norte and Humboldt counties, Senior Environmental Scientist Shawn Fresz told supervisors.

This includes animals taken through the general draw program, the Shared Habitat Alliance for Recreational Enhancement, or SHARE, and the tag system, Fresz said. Hunters will also be asked to submit samples to the department, he said.

“Full cooperation would mean we would collect approximately 126 samples of harvested elk during this 2020 hunt season,” Fresz said. “Hunters would be requested to bring the head, liver and all four legs intact to either our department office in Eureka or to our check station that we will be manning throughout the hunting season at Lake Earl.”

CDFW will study the samples in its labs and will send them to the California Animal Health and Food Safety Lab at the University of California, Davis, Fresz said. Scientists will test the samples for TAHD and other diseases, he said.

Department staff will also collect samples from elk that have been killed through other means, including predation, vehicle collisions and poaching, Fresz said.

Scientists have been studying TAHD in California since 2016, according to Fresz. Since then, they’ve investigated the deaths of 120 animals and have performed necropsies on 63. CDFW staff began collecting normal hoof samples in 2019.

Samples taken from five animals were sent to the Washington Animal Disease Diagnostic Laboratory in February to test for the disease, according to Fresz.

“After the first confirmed case of elk hoof disease, the northern region began documenting the occurrence of any elk that were limping, were less than ideal body conditions — so they were thin or emaciated — or had evidence of diarrhea and had visible abnormal hoof growth,” Fresz said. “Focused surveillance through regular visual observations will continue occur on the effected herd, adjacent herds and other resident herds of wet substrates with significant livestock overlap in Del Norte and Humboldt counties.”

“Lethal removal” through hunting and the targeted removal of sick animals is the only management tool CDFW biologists have, Fresz said. When staff target sick animals, he said, they look at the animal’s overall welfare.

Lantz pointed out that the disease is difficult to eradicate once it’s present in elk or livestock. She noted that in livestock, digital dermatitis is often found on a dairy and can be managed by treating the lesions it causes. But the only option wildlife biologists have, she said, is lethal removal.

“Because we don’t have a great understanding of the disease in general it’s going to take some time to see what the effects are of lethal removal,” Lantz said. “Animal welfare is also a priority for us because of the severity of this disease and how does it affect (the animal’s) ability to graze.”

In a letter to the Board of Supervisors, county resident Phoebe Lenhart, described the progression of the disease from Washington and Oregon to Del Norte County. She said CDFW had asked the Fish and Game Commission for an increased number of elk tags for the 2020-21 season. She asked the Board of Supervisors to call on the Fish and Game Commission to end the elk hunt in an effort to curtail the spread of TAHD.

According to District 1 Roger Gitlin, Lenhart also reached out to him. Gitlin asked Fresz if he had communicated with Lenhart.
Fresz said he had spoken with Lenhart and provided detailed answers to the best of his ability.