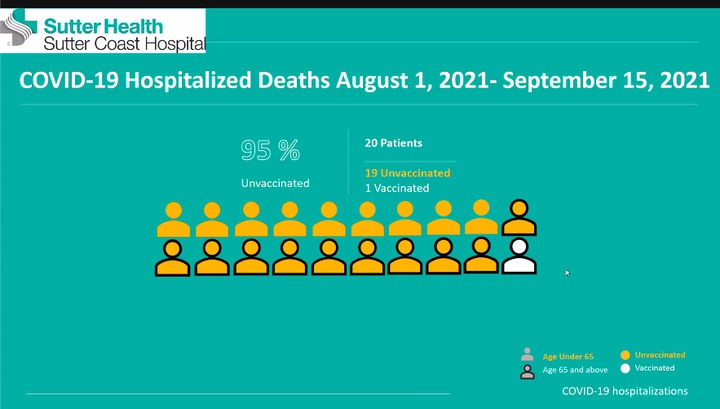 This slide shows the number of COVID-19 deaths that have occurred at Sutter Coast Hospital since Aug. 1.

However, the community has experienced yet another death from COVID-19 as of Thursday, according to the Public Health Branch. Del Norte County’s death count went from 34 on Wednesday to 35 on Thursday.

Twenty-two new cases were reported to the Public Health Branch on Thursday, making for a total of 175 active cases in the community.

Speaking at a community briefing held since the peak of the COVID-19 surge in Del Norte County, Stutz said the average number of new cases per day has decreased in the last three weeks. However, the most cases are occurring in people between the ages of 18 and 49, he said.

“We’re still around 100 cases per 100,000 population per day, which is considered high,” Stutz said, citing the criteria the U.S. Centers for Disease Control and Prevention sets for high COVID transmission. “The number of hospital admissions has also come down. In weeks prior we had an average of two, we’re down to an average of 1.2, and the average number of ICU patients has decreased from seven to five.”

The percentage of Del Norters who have been fully vaccinated against COVID-19 continues to creep up. As of Thursday, 45.8 percent, or 10,507 people, have been inoculated against COVID in Del Norte County, according to the California Department of Public Health.

“If you add the number of partial vaccinations to the number of fully vaccinated, we’ve broken that 50 percent mark,” he said. “Assuming that people who got the initial shot will get the second shot, we will break the 50 percent mark for Del Norte County. That’s pretty awesome.”

According to Sutter Coast Hospital CEO Mitch Hanna, there are currently 12 COVID patients at the hospital. About 72 percent of those individuals are unvaccinated, he said.

Hanna also noted that of the 20 patients who have died of COVID at the hospital between Aug. 1 and Wednesday, one person was vaccinated. Many people succumbing to the virus have other risk factors associated with their death, he said.

According to Hanna, four COVID-19 patients have been transferred from Sutter Coast Hospital to other hospitals since Aug. 1. All were unvaccinated, he said. One was transferred due to a lack of beds, Hanna said. The others were transferred for a higher level of care.

“We haven’t had to transfer to a huge number,” he said. “Part of that is because we tried to get ahead of the curve.”

Currently, visitation at the hospital isn’t allowed, though since the number of COVID hospitalizations has decreased, Hanna said, its leadership is looking at reinstating visitation.

Another meeting is scheduled for next week, though moderator Cindy Vosburg, executive director of the Crescent City-Del Norte County Chamber of Commerce, said she hoped the COVID numbers would continue its downward trend through the weekend.