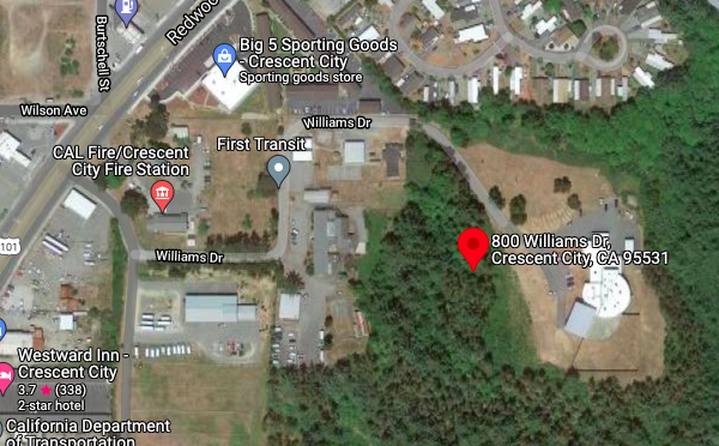 Dana Gill Port, Crescent City United Methodist Church pastor and a True North leader, said her ambitious hope is to have a total of 40 units. These would include detached bedrooms and congregate facilities housing kitchens, bathrooms, laundry and storage, she told the Del Norte County Board of Supervisors on Tuesday.

“Our pilot project is a place of temporary refuge for individuals who have been chronically unhoused or have become recently unhoused who need case management support,” Gill Port said. “Our intention is to provide 24-hour staff and support for residents including access to counselors for case management and support on mental health issues, substance abuse (and) job training.”

The old juvenile hall at 800 Williams Drive in Crescent City is ideal for this, Gill Port said, since it’s close to public transportation, health clinics, groceries and pharmacies, has enough space for multiple units and is set back from the highway.

The program would enable those struggling with homelessness to feel safe and secure in their own space so they can begin transitioning into permanent housing, Gill Port said. She said most move into permanent supportive housing situations within six to nine months.

True North would act as a developer for the project, Gill Port said, while Darlene Spoor, of the Arcata House Partnership, indicated her organization may be willing to run it.

“We have researched other sites and there’s one other potential site that could work, but it’s not nearly as good as this one,” she said.

True North’s advocacy for ending homeless began in about 2018 when it brought a resolution toward that end before the Del Norte Board of Supervisors, which unanimously approved it. A year later True North introduced supervisors to Rogue Retreat, a Medford-based nonprofit that operates a transitional supportive housing program using tiny homes.

Right after supervisors met Rogue Retreat representatives in 2019, Administrative Analyst Toni Self presented them with the findings of an analysis on permanent supportive housing models paid for through $75,000 in state No Place Like Home dollars.

That analysis, prepared for the county by Chico-based Housing Tools, identified the old juvenile hall site as one of 14 in the county that could be a viable home for a supportive housing program seeking to address homelessness.

Those discussions include a standalone emergency operations center and expanding other facilities Lopez said he couldn’t go into detail on. Lopez said there are also hurdles that need to be discussed with True North, administration, the community development department, county counsel and the Department of Health and Human Services.

“Each of our departments identified gaps in the information that was provided to us, and there are things that just had to be addressed,” Lopez told supervisors, adding that he and other county directors met with True North representatives. “This is why we directed True North to come to the Board. We knew it was much bigger than us just taking this on.”

In previous years, Reyman said he would have been totally opposed to opening a transitional housing program for the homeless near juvenile hall, though he said that stance has relaxed a bit. Still, he said, he has concerns.

One is traffic on Williams Drive, including staff, law enforcement and youth who are obtaining probation services at juvenile hall, Reyman said. He noted that people who are struggling with homelessness are often in a position where they can be victimized while his staff supervise youth “that are absolutely willing to victimize people.”

Reyman also noted that youth his staff supervises can also be victimized by the homeless population, though he has been working with Gill Port and True North who have discussed putting up fences and maintaining security at the facility.

However, Reyman said he supported the tiny house concept for transitional supportive housing.

“The general idea of a self governance model works well,” he said. “I think that this is definitely worth looking at and pursuing.”

Allen Winogradov, the county’s parks and building maintenance director, said that while the county owns a few other properties that could work, the old juvenile hall site is the best option if the actual juvenile hall building, which has asbestos and lead and is boarded up, is left alone.

“Is this the right place for it? That’s up to you guys,” he said.

District 4 Supervisor Gerry Hemmingsen asked county staff and True North representatives to open up their search instead of being focused on the old juvenile hall site as the one option.

Hemmingsen’s colleague, District 1 representative Darrin Short said he wanted to hear from businesses such as Big 5 Sporting Goods and Redwood Coast Transit as well as CalFire about how a transitional housing program would impact them. Short also pointed out that the area is within the tsunami inundation zone.

District 2 Supervisor Valerie Starkey said she also wanted to hear from businesses, including the Del Norte County Fairgrounds. But, she pointed out, that the juvenile hall site was one potential option Self highlighted in her No Place Like Home presentation to the Board of Supervisors in 2019.

“I personally feel like it’s an ideal site,” Starkey said. “It’s close to services, it’s close to shopping and that sort of thing. I think it’s a great location.”