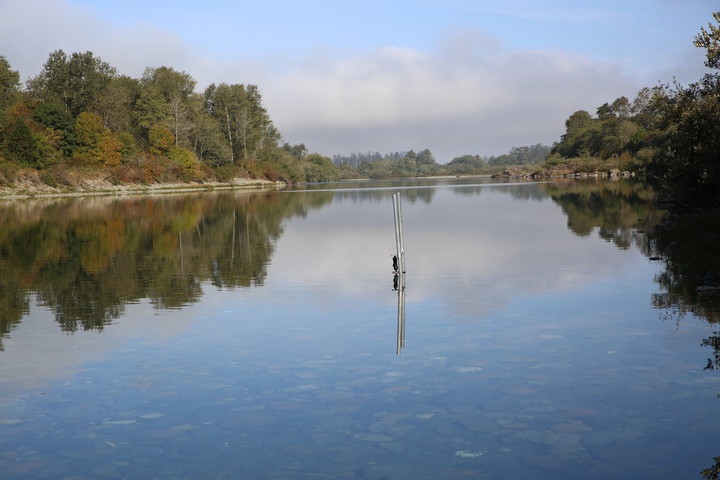 Known as the Lhuk Adult Enumeration Project, the Tolowa Dee-ni’ Nation’s goal is to conduct these annual counts in perpetuity, Jacobs said.

The Tolowa Dee-ni’ Nation purchased the two ARIS units using Bureau of Indian Affairs Fish Hatchery Maintenance dollars, according to a tribal press release. Since the units use sound to generate a high-resolution image, they can operate at night, in dirty water and when river levels are high.

“This data is extremely valuable for understanding population status and trends in the river during a given year and as they fluctuate over time,” Jacobs told the Outpost on Tuesday. “You cannot assess the impacts of changes to harvest regulations or the effectiveness of creating habitat for different life stages if you are not observing how the fish populations respond over time.”

The project site is upstream from Rowdy Creek, but is downstream from other spawning tributaries in the watershed, according to the press release.

According to Jacobs, annual population estimates for chinook or steelhead in the Smith River haven’t been made since 2014-15. Salmonid populations are declining throughout the Pacific Northwest, she said, but since coho are the only endangered salmonid species in the Smith River, it often loses out to other watersheds to the south with multiple endangered runs when it comes to fisheries monitoring dollars.

The Tolowa Dee-ni’ Nation applied for state, federal and tribal dollars to monitor adult chinook and steelhead populations on the Smith River in 2016, Jacobs said. The tribe also pushed the California Department of Fish and Wildlife to conduct counts, even offering to provide funding and staff to operate sonar equipment to facilitate those counts, she said.

Being able to conduct long-term annual monitoring of the salmonid population in the Smith River can help the tribe determine its overall health, Jacobs said. They can also find out if steelhead populations have increased since CDFW eliminated retention in 2010.

The Tolowa Dee-ni’ Nation can also determine if fish populations have increased overall as a result of the $3.4 million in state funding put toward restoration in the Smith River watershed in the last decade, she said.

According to the Tolowa Dee-ni’ Nation press release, sonar data is recorded into video files Fisheries Division staff can analyze to obtain daily counts of adults passing through the area. These counts will be used to estimate the total run size, develop annual escapement estimates and track long-term trends in abundance. It will also be used to evaluate the efficacy of existing harvest regulations, according to the news release.

“Our project will generate an estimate of the number of chinook salmon and steelhead returning to spawn in the Smith River, allowing us to eventually track trends in the population through time,” Jacobs said. “Knowing how many fish are returning to the river can be used to prioritize restoration, additional monitoring and a host of other watershed actions.”

According to the Tolowa Dee-ni’ Nation’s press release, the tribe received support from the Del Norte County Resource Conservation District, the Board of Supervisors and local and regional environmental and fisheries advocacy groups.