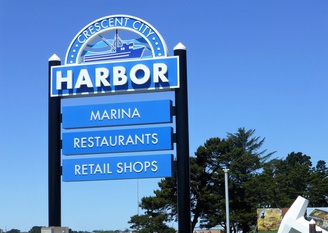 • Crescent City Harbor's Dredge Dilemma: Disposal of Nearly A Decade's Worth of Material Stands In Way Of A Permit

The Crescent City Harbor District may have found a way to deplete the nearly 10 years worth of dredge materials it has been storing at the port’s northern end.

Commissioners on Tuesday authorized Harbormaster Tim Petrick to sign a not-to-exceed $14,000 contract with Portland-based GeoEngineers. GeoEngineers will work with the Northern California Regional Water Quality Control Board to obtain a permit allowing them to use the fine silt and soil in ways that could benefit the harbor, according to Petrick.

But that process could take a year, he said.

“We’ve got a few potential uses for it,” Petrick said of the dredge spoils. “Some of our development plans could use some fill and some of the commissioners have soem contacts that have said they would be interested in fill material as well. But we can’t finalize anything until we have permits. If we don’t have the permit then we can’t get rid of it.”

Finding a use and a viable disposal site for the dredge tailings has been one of the major holdups to the Crescent City Harbor District obtaining a dredge permit from the U.S. Army Corps of Engineers, Petrick told the Wild Rivers Outpost in September.

The Army Corps has accepted responsibility for between 60,000-90,000 cubic yards of the stuff. But because the Water Quality Control Board classifies the material as solid waste, it can’t be deposited in a regular landfill, Petrick told the Outpost.

According to its proposal, GeoEngineers would work with the Harbor District to develop a preliminary soil management plan , which includes identifying the volume of soil that would be removed and proposing re-use locations and “beneficial uses.

GeoEngineers would then develop a “soil re-use proposal” on the harbor district’s behalf, according to its proposal.

Meanwhile, the Crescent City Harbor District continues to pursue a permit with the U.S. Army Corps of Engineers to identify a disposal site that can accept up to 10 years worth of dredge tailings, Petrick said.

Currently the only disposal place the Harbor District can take its fine tailings is the Humboldt Open Ocean Disposal Site, or HOODS, Petrick said. But at about 96 miles to the south by boat, it’s too expensive, he said.

“We could do it once or twice, but it would never be financially feasible for us to do it regularly,” Petrick told the Outpost.

The U.S. Army Corps of Engineers has spent up to $500,000 on studies to determine whether a disposal site directly offshore from the Crescent City Harbor would be feasible or if dumping the dredge tailings over the north jetty would suffice, Petrick said. The latter option would be the most cost effective, he said, but making that determination will likely take two years.

For the short term, the Crescent City Harbor has worked with the Army Corps of Engineers and the Water Board to conduct diver dredging, especially around a synchrolift at Fashion Blacksmith, a shipyard at the port.

The port deposits that material in a deeper area of the harbor about 100-150 yards away, Petrick said.

“If we were to clear space in the dredge ponds, we could get an emergency permit to pump a small amount of tailings, clearing out underneath the synchrolift, into the dredge ponds,” Petrick said. “If we do diver dredging, it’s going to buy us the time until we get a long-term permit and then we can deal with that in a much better way.”