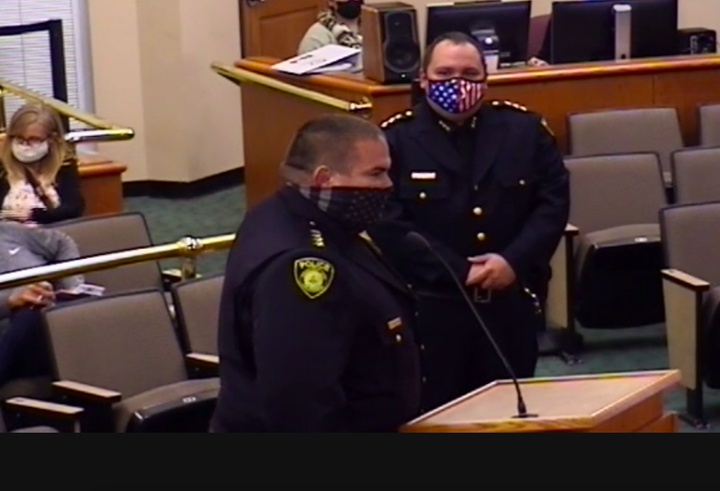 Just before his wife pinned his lieutenant badge on his lapel, Justin Gill said he was blessed and honored to be part of a great team at the Crescent City Police Department.

“I’m happy to be in this role to assist the chief in moving forward and making great things happen,” he told Councilors on Monday. “We’re a great team for a great city.”

Gill, who started his law enforcement career at CCPD, returned to the department about two years ago after working for the Del Norte County Sheriff’s Office as well as the District Attorney’s Office, according to CCPD Chief Richard Griffin.

Gill spent some time in Arizona and was Blue Lake Rancheria’s Chief of Police before returning to Crescent City, Griffin said.

“I’m very happy to have him back in the CCPD family,” Griffin said promoting Gill from sergeant to lieutenant. “I’m looking forward to many years, at least hopefully 13 with me, continuing to build the family we have here.”

According to Griffin, Gill has resurrected CCPD’s explorer program, which has grown to include 13 kids.

Gill has also helped Griffin and CCPD meet goals and standards for offering mandatory perishable skills training to officers in-house rather than elsewhere in California. This includes training on firearms, defensive tactics and driving, Griffin said.

“We’re one of the first agencies in Northern California to have all those perishable skills programs in-house approved by POST,” Griffin said, referring to the Peace Officer Standards in Training Commission. “The only ones we have left for this two-year cycle — and we’re not even through the first year — is driving and defensive tactics, and then we’re good on those. A few years ago, we had some issues as a department getting there. That will never be a department again so long as you have this administration staff I promise you that.”

According to Griffin, the money saved by offering that training in-house can be used to enhance sexual assault and homicide investigations.

“That’s just a little bit of what he does,” Griffin told Councilors of Gill. “I’m very proud of him as a man, as a husband — you see his family behind us. I couldn’t be prouder to say, I want to introduce you now to Lt. Justin Gill.”

Gill’s promotion also drew accolades from the Crescent City Council, including its longest-serving member, Mayor Pro Tem Blake Inscore, who said he remembered a conversation with the new lieutenant in his home about seven years ago when he was newly-elected.

“You said if we supported you we could do some great things,” Inscore said. “I don’t think either one of us could have imagined we’d be where we are today. I’m proud of all you guys and girls.”

According to City Manager Eric Wier, Gill’s promotion to lieutenant is one of the recommendations the Measure S Oversight Committee has made to enhance the city’s law enforcement. CCPD also used those sales tax measure dollars to purchase a new patrol vehicle, Wier said.