Though Its Estimated Cost is $1.3 Billion, Tunnel Was Cheaper Than Other Last Chance Grade Alternatives, According to Caltrans Representative

Despite its estimated $1.3 billion price tag, building a tunnel to avoid Last Chance Grade was found to be the “cheapest and best way to avoid the landslide,” Caltrans District 1 representative Jaime Matteoli told the Crescent City Council on Monday.

Meeting with Councilors as part of the state agency’s environmental scoping period for the Last Chance Grade Permanent Restoration Project, project manager, Matteoli, said the two-mile long tunnel turned out to be less expensive than some alternatives that would have re-routed U.S. 101 east of the landslide.

On Monday, Crescent City Manager Eric Wier called for a special meeting to provide the Council with the opportunity to weigh in on the project. Mayor Jason Greenough and Mayor Pro Tem Blake Inscore were absent.

The tunnel, dubbed Alternative F, is one of two propositions out of an original seven for a permanent fix to the fraught stretch of highway nine miles south of Crescent City. 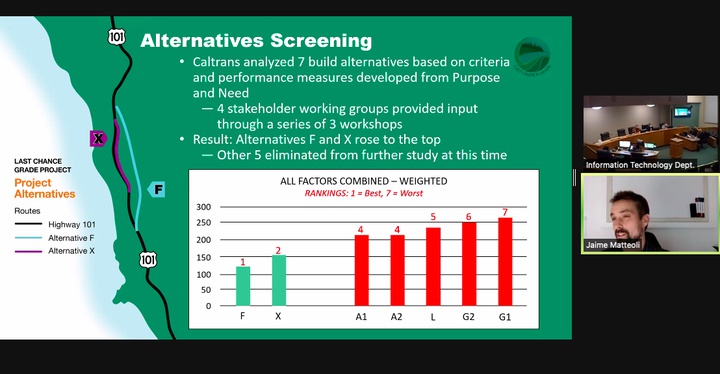 The other alternative, Alternative X, is an “end-to-end re-engineering” of U.S. 101, which involves moving the road inland by about 130 feet while installing retaining walls and better drainage to divert water away from the hill, according to Matteoli.

“We don’t have enough analysis or data on what is the improvement for X,” he told Councilors. “How much more reliable is it? That’s something we’re studying.”

Caltrans District 1 announced that it was preparing a draft environmental impact report on Nov. 5 and held a virtual public meeting on Nov. 18 to answer questions. The agency will take public comment on the two proposed alternatives until 5 p.m. Dec. 6, according to the agency’s Last Chance Grade website.

The project is expected to be completed in 2038, according to Matteoli. When Caltrans whittled the proposed alternatives from seven to two, that shaved about a year off the timeline, he said.

According to Matteoli, building Alternative F, which includes the tunnel would cost an estimated $1.3 billion in capital for the construction contract. There would be additional costs for labor and mitigation, but those are currently being estimated. Matteoli said the capital cost estimate will be refined when Caltrans knows more.

If it’s built, the tunnel is expected to have a life of about 70 years, though Matteoli said most Caltrans infrastructure like bridges, culverts and tunnels are structured to last longer than that. Though he said Caltrans doesn’t have a number yet for what it would cost to maintain the tunnel, Matteoli said it’s expected to be far less than maintaining U.S. 101’s current alignment. Caltrans has spent more than $100 million in the last 20 years to maintain and repair Last Chance Grade, he said.

If a tunnel is chosen as the permanent fix for Last Chance Grade, the current highway will be decommissioned, Matteoli said.

Caltrans has used meshed anchors to shore up the hillside at Last Chance Grade as part of emergency response work to a massive landslide that shuttered U.S. 101 in February. Thirty-minute delays are expected to continue until some time in 2022.

In addition to the ongoing emergency response project, Caltrans crews have been repairing two damaged walls in the area. They are also working to expand the roadway in the area by several hundred feet to further stabilize the current roadway.

People can still weigh in on the potential environmental effects and topics Caltrans should evaluate in the environmental impact report for the Last Chance Grade Permanent Restoration Project.

Comments can also be emailed to scopingcomments@lastchancegrade.com.