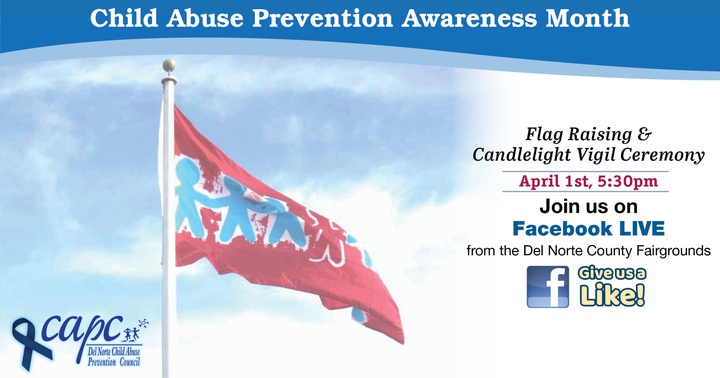 Local children’s advocates will commemorate April as Child Abuse Prevention Month by raising a flag and holding a candlelight vigil at 5:30 p.m. at the Del Norte County Fairgrounds on Thursday.

“Our Sheriff Apperson will be presenting the flag (and) raising the flag,” Mitchell said at a Crescent City Council meeting March 15. “Soon you’ll see flags flying around the community and we would love for City Council to fly one over City Hall.”

The Children’s Memorial Flag features five figures, four in blue and one in white.

“The child in white signifies the one in five children that die from child abuse and neglect,” Mitchell told the Wild Rivers Outpost. “Every year we post the flags and we fly them all over Del Norte County.”

About three years ago the Child Abuse Prevention Council received a mini grant to purchase Children’s Memorial Flags and fly them at city and county buildings and local agencies such as the Family Resource Center of the Redwoods and the Del Norte County Library.

The Child Abuse Prevention Council also encourage Del Norters to take part in the national #PassthePinwheel campaign. According to Mitchell, this will be a pinwheel garden to bring awareness to child abuse prevention as well.

“Likeminded agencies will host a story hour for children and offer trivia prizes,” she said. “There are a lot of local resources and tips for parents.”

Child Abuse Prevention Council members will be on the air from 6 p.m-7 p.m. April 14 for more information on child abuse prevention.