With a COVID-19 Vaccine Making the Rounds, Crescent City's Fourth of July Celebration Is On, Chamber Director Says 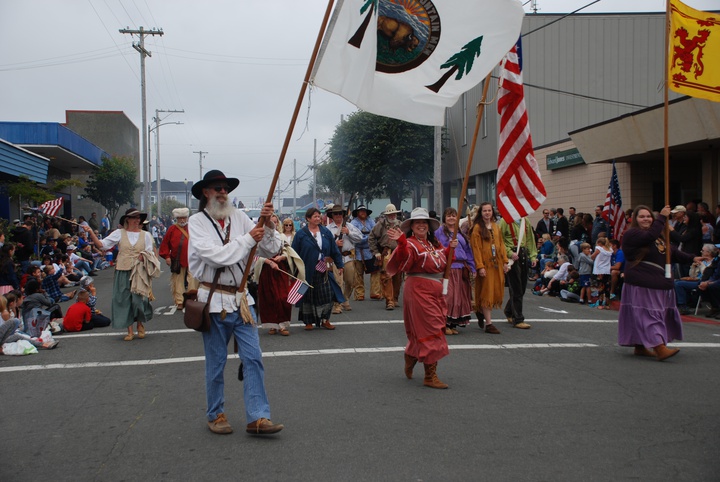 Hopeful that a vaccine will stave off a COVID-19 surge locally, the Crescent City-Del Norte County Chamber of Commerce is planning for an Independence Day celebration.

That celebration will include the Deck Party, parade, festival in the park and the professional fireworks display, Executive Director Cindy Vosburg told the Wild Rivers Outpost on Thursday. But people still need to wear a mask, maintain a social distance and refrain from large indoor gatherings, she said.

“If we don’t do those things we can’t control what the outcome is,” Vosburg said. “A lot of people think that helps and a lot of people think it doesn’t, but there’s one thing we all agree on, we all want our businesses and our schools open and thriving.”

Thousands flock to Del Norte County for the annual parade, festival and fireworks display. For many nonprofits the holiday is a chance to raise money for their organizations. But last year because of the pandemic and the California governor’s order prohibiting large gatherings, Crescent City’s annual celebration, including the fireworks, was canceled.

Vosburg said neither the Chamber nor the Del Norte Public Health Branch had any choice — no one wanted to go against the governor’s orders.

But now that there’s a vaccine and many locals have received their first dose and are looking to get their second, Vosburg said she feels there should be a “pretty normal Fourth of July celebration.” Public Health Officer Dr. Warren Rehwaldt feels the same, she said. She also pointed out that the governor has relaxed a few things, including the reopening of theme parks as well as outdoor sports.

The Chamber is currently in the planning stages preparing for the celebration, Vosburg said. This includes reaching out to sponsors, ordering port-a-potties and getting an alcohol license for two days. The Chamber will also be asking the community to nominate a grand marshal for the parade and will be putting its deposit down for the fireworks, she said.

“One of the things — at the last event, in our parade, we didn’t have a color guard for an unforeseeable reason,” Vosburg said. “We found out that’s very important so we’re reaching out to make sure we have a color guard this year.”

The two co-chairs for the Fourth of July celebration are Emily Reed and District 2 Supervisor Valerie Starkey. According to Vosburg, they will be out and about in the community getting raffle items as well as working with Soroptimist International, which hosts Cow Chip Bingo.

“The next 3-4 months will be busy busy busy as we pull this all together, so the business community can look forward to hearing from us as we ask for sponsorships to help fund this event,” Vosburg said. “The parade is free. It’s free to people who are in the parade as well as those who attend it.”

Roughly 7,400 doses of COVID-19 vaccine has been administered in Del Norte County, according to a Thursday letter to the community from Rehwaldt. Though there’s overall improvement in California and the U.S., cases have trended up in a few places, Del Norte included, he said.

“Our weekly published case rate (per 100,000) has gone from 7 to 15 over the last month while all the surrounding California counties have gone down,” Rehwaldt wrote. “If this rate gets much higher (17-18 range) we will drop back to Purple Tier, not a good trend.”

Six new COVID-19 cases were reported to the Public Health Branch on Wednesday, making for a total of 31 active cases in Del Norte County. Three people are currently in the hospital.

There have been a total of 1,113 confirmed COVID-19 cases in Del Norte County since the pandemic started about a year ago and five deaths, according to the county’s information hub.