« With a COVID-19 Vaccine Making the Rounds, Crescent City's Fourth of July Celebration Is On, Chamber Director Says 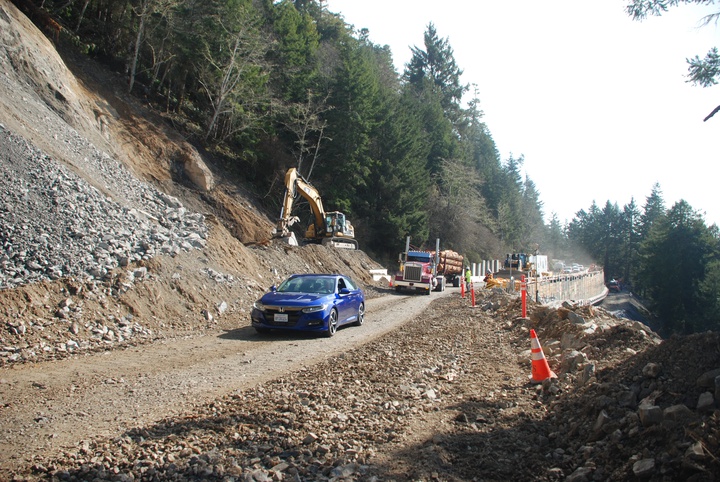 Jail renovation, an emergency operations center, and repair and replacement of sewage infrastructure will be among the projects Del Norte County will submit to its congressman for potential inclusion in upcoming appropriations bills.

A U.S. 101 bypass around Last Chance Grade is another high priority project, one Caltrans is spearheading. But until the environmental permitting process is further along, Del Norte Local Transportation Commission Tamera Leighton said she didn’t think a serious conversation would be had yet about funding construction for the bypass.

Leighton also noted that the ongoing emergency work to keep the current highway open at the slide-prone area about 10 miles south of Crescent City is fully funded and will continue to be fully funded.

“There are too many unknowns at this time to request funding for something happening too far down the road,” Leighton told county supervisors on Tuesday.

Speaking with Greg Burns, a partner with Thorn Run Partners, Del Norte County’s advocate in Washington D.C., said members of Congress will likely have to make requests for community-funded projects — or earmarks — by the end of April. This means the county should have information for Congressman Jared Huffman by no later than mid-April, Burns said.

According to County Administrative Officer Jay Sarina, the plan was to submit projects that were considered “shovel ready,” but he didn’t think there was one that had gone through the permitting phase and was ready for construction.

However, in speaking with the Community Development Department, a top priority was renovation of the Del Norte County Jail, Sarina said. The county has applied at least twice for funding for significant renovations.

Another top priority was the Emergency Operations Center, which does not have its own dedicated space and, when activated, operates out of Crescent Fire and Rescue’s station on Washington Boulevard, Sarina said.

A third project was repair and replacement of infrastructure within the County Service Area of Crescent City’s wastewater treatment system, Sarina said. This includes getting money to repair lift stations and backup generators.

“There’s always going to be projects related to sewer lines that go to the city,” Sarina said.

It was District 4 Supervisor Gerry Hemmingsen that pointed out that the Last Chance Grade project is a priority. He asked if the emergency project on U.S. 101 to keep the current alignment open is something the county could ask Huffman to include in an appropriations bill or if Caltrans would have to make that ask.

Burns said he gave Sarina “language he could share with Caltrans,” asking the department if it would be willing to make a funding request to Huffman.

“All this process has happened so fast. The amount of information is not always clear on this,” Burns said. “You have to remember also, I think it’s roughly 2/3rds of Congress has never operated in an environment where there’s been an earmark. Most Congressional staff have no clue about how this process works.”

Burns said he anticipated two opportunities to request project funding through Congress. The first is through the annual appropriations process. He noted that Congressman Peter DeFazio, of Oregon, chairs the House Transportation Committee and indicated he’d like to do earmarks for Surface Transportation Reauthorization.

That opportunity will likely come around in April or May, Burns said.

“That might be a better place for us, working in partnership with Caltrans, to seek an earmark for Last Chance Grade,” he said. “I tell you all this (for you) to know that this is not necessarily the only bite at the apple this year to make a request on behalf of Last Chance Grade. If we were to do so it would do so in concert with the project sponsor, which in this case is Caltrans.”

Del Norte County Board of Supervisors chairman, Chris Howard, noted that the six alternatives for a bypass around Last Chance Grade has narrowed and the project cost is quickly rising to more than $1 billion. This, he said, represents more than a fifth of the state’s overall State Highway Operation and Protection Program budget. Going after a Congressional earmark for Last Chance Grade is an interesting strategy, Howard said.

“I know a lot of the thought expressed to both Jay (Sarina) and I has been to start accumulating money, squirreling it away for lack of a better term, because it’s going to be such a huge lift for the state dedicating so much of one funding source to our project,” he said. “It’s an interesting strategy and one I’d like to flesh out more with you on how, if it does turn out to be a tunnel, with a $1.3 billion price tag, how do we wrestle with this?”

Burns said Congress and the Biden Administration is focused on an infrastructure package and there may be “vastly enhanced levels of funding” that go along with it. If that were the case, California would have additional funding to address projects like Last Chance Grade.

District 2 Valerie Starkey, however, said she wants to go after funding for the jail renovation, emergency operations area and sewage infrastructure.

“I loved this discussion we had about Last Chance Grade, but I think this is a discussion we should have right now for this particular funding,” she said.

The board voted 4-0-1 in favor of submitting its Community-Funded Projects list to Huffman and his staff. District 5 Supervisor Bob Berkowitz was absent.