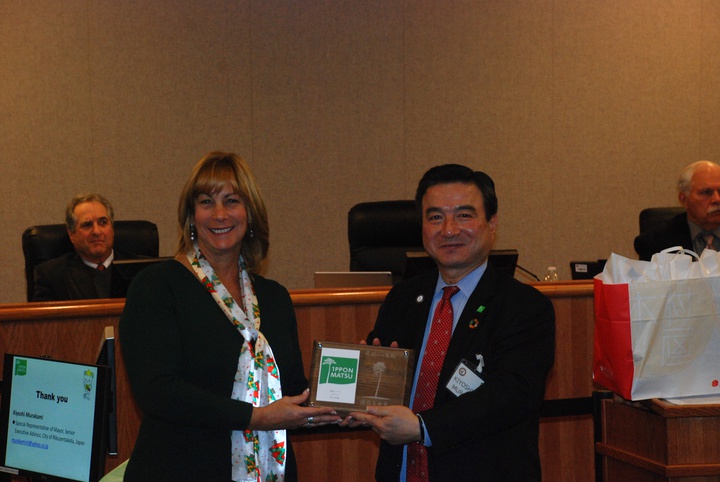 In both instances, Del Norte County Board of Supervisors and the Del Norte Solid Waste Management Authority members Tuesday objected to using public funds for a nonprofit — the Kamome Foundation — that is just getting started.

“I have some concerns about giving money to a new nonprofit, which does not have an established community involvement yet,” District 2 Supervisor Valerie Starkey told her colleagues. “It comes to the question of should the Board be using taxpayer dollars to support any brand new nonprofit, and if we’re doing this, are we setting a precedence for other nonprofits to look at in the future?”

Since a motion wasn’t put forward at the Board of Supervisors meeting, a second request from Kamome Foundation president Bill Steven for a donation of $2,190 failed. Those dollars had been included in the county’s 2020-21 budget for “Travel and Training - Japan Delegation” but hadn’t been spent.

Later on Tuesday, The Del Norte Solid Waste Management Authority voted 4-0-1 in favor of a motion Starkey made to deny the Kamome Foundation a $2,200 donation. DNSWMA Chairman  and Crescent City Mayor Pro Tem Blake Inscore, an officer with the new nonprofit, recused himself.

After DNSWMA commissioners voted, Inscore, who has been involved with the Sister City relationship since before its inception in 2018, said he agreed with their decision to deny the donation.

Inscore also noted that the proposed donation wasn’t a request from the Kamome Foundation, but came from Solid Waste staff.

It was Solid Waste Authority Director Tedd Ward who suggested donating $2,200 to the new foundation, drawing a connection between the boat Kamome and the need to educate the community about ocean litter and tsunami debris.

“We don’t want to give away public funds unless there is a defined community benefit toward those efforts,” Ward said. “The findings would be that as the (joint powers authority) responsible for implementation and oversight of programs addressing solid waste, recycling and household waste, outreach efforts regarding the impacts associated with Solid Waste also includes tsunami debris.”

The Kamome Foundation is named for the 20-foot long fishing vessel that washed ashore on South Beach in 2013 — two years after the Tohoku earthquake and tsunami swept it away from Takata High School.

On Tuesday, Steven told supervisors that the Kamome Foundation’s goal is to further ongoing exchanges between Del Norte and Takata high schools without continuing to use government dollars.

“We want to get up and walk on our own without any assistance, but we’re still crawling before we walk and that’s why we’re requesting funds,” Steven said. “As the Kamome Foundation, we have many things planned, but I want everybody to know, the kids, the teens, the exchanges with the high school students remain the biggest priority for the Kamome Foundation.”

In addition to Steven and Inscore, the Kamome Foundation’s other members are District 3 Supervisor Chris Howard and Del Norte County Superintendent of Schools Jeff Harris.

Howard was absent from Tuesday’s Board of Supervisors meeting.

On Tuesday, Steven told supervisors the new foundation has bylaws and articles of incorporation and is looking for more involvement.

During the Board’s discussion, District 1 Supervisor Darrin Short, who as a Crescent City Councilor participated in cultural exchanges with Rikuzentakata, said that while that relationship serves a public benefit, plenty of people are against using public dollars to further that benefit.

“I believe it’s a worthwhile expenditure,” Short said, adding that he personally would make a donation to the Kamome Foundation. “I just hate to say that right now because of things that are going on in my backyard, I’m not able to vote in favor of this right now.”

At the Del Norte Solid Waste Management Authority, Short, who took over as chairman when Inscore recused himself, said he didn’t think that the solid waste authority had the “correct position” to donate public funds to the Kamome Foundation.

Starkey, noting that the DNSWMA recently approved a rate increase for Recology Del Norte’s curbside customers, couldn’t approve using taxpayers’ money to make the donation to the Kamome Foundation. However, she said, she wouldn’t be opposed to making a personal donation.

“We’re a real nickel and dime operation here at the county and all of our nickels and dimes matter,” she said at the Board of Supervisors meeting. “I understand the money has already been allocated and already budgeted to go towards travel and training for our Sister City, but if we don’t spend it, it doesn’t disappear it rolls back into the fund balance. We can use the money to fix something here locally, a pothole or to upgrade our parks.”

During public comment, though he’s a Kamome Foundation member, Harris told DNSWMA commissioners that he supported their decision.

“I truly appreciate the fiduciary responsibility that Solid Waste has shown by saying these funds need to go to a service that Solid Waste is providing,” he said. “At some point in the future, as Valerie stated, if it’s appropriate to come back and talk about the benefit of Solid Waste partnering in some way or form to provide educational or cross cultural opportunities then I’m all for that.”