« After Distinguishing Himself At The Regional and State Levels, Del Norte High School Music Student Will Participate In National Honors Ensemble 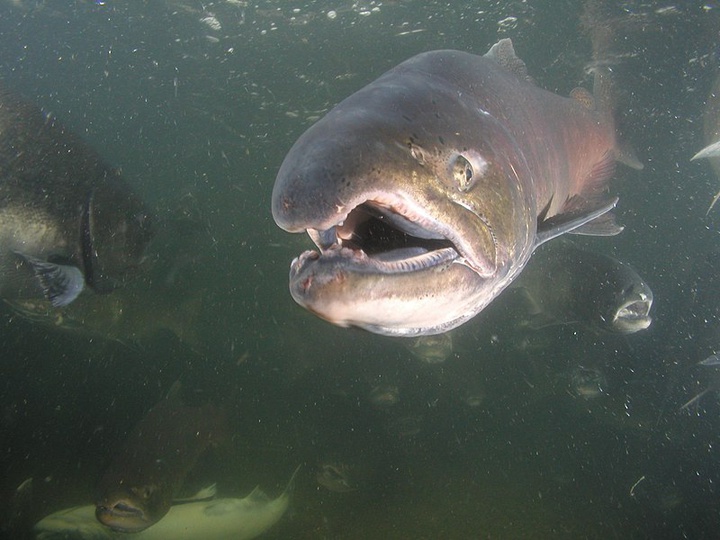 Crescent City Harbor is exploring the possibility of rearing chinook salmon in net pens at the port. Photo: Courtesy of California Department of Fish and Wildlife

The Crescent City Harbor may become a nursery for juvenile chinook salmon if a partnership with the Rowdy Creek Fish Hatchery moves forward.

Commissioners on Tuesday discussed working with the Smith River-based hatchery and its parent entity, the Tolowa Dee-ni’ Nation, as a path forward for establishing net pens at the harbor. Those pens would provide refuge for fingerling salmon from the hatchery, protecting them from birds and sea lions and acclimatizing them to life in the ocean, according to Commissioner Rick Shepherd.

The hope is that by raising chinook in the harbor the Pacific Fishery Management Council, which sets quotas for West Coast fisheries, may increase catch limits for local sport and commercial fishermen, said Shepherd, president of the Crescent City Commercial Fisherman’s Marketing Association. It could also be a tourism boon for the harbor, he said.

“It’ll probably be over there by the boat launch and we could even do it in the harbor, one of the dock areas, but we haven’t designated a spot,” Shepherd said, referring to possible locations for one or two net pens. “We’re shooting for probably the spring of 2022 because they don’t have fish at Rowdy Creek to give us this year.”

The discussion began when Deputy Harbormaster Tim Petrick did a brief report on his research into a similar program in Santa Cruz facilitated through the California Department of Fish and Wildlife and funded through the Salmon Stamp Program.

The Santa Cruz program has pens between Moss Landing in the south and Pillar Point north of Half Moon Bay to the north, Petrick said. However, for Crescent City to take advantage of funding through the Salmon Stamp Program, it’d have to get the Commercial Salmon Trollers Advisory Committee to approve it, complete an environmental impact report and then have the committee vote to redirect funds from another project, he said.

“They’d have to find that our project would be both less expensive and more effective than at least one of the other programs,” Petrick said.

There are three other net pen programs facilitated through CDFW, he said.

According to Petrick, the net pen program in Santa Cruz is a “quick release program.” The hatchery-raised fish are put into a net pen and within three to five hours, a troller takes the pen off shore to release the salmon, he said. This quick-release method ensures the salmon don’t imprint on the harbor, Petrick said.

“The Santa Cruz Harbor is pretty prime for fish kill,” he said. “When they imprinted on the harbor, all the fish came back in, which sucks all the oxygen out of the water in that small space and they all die. It also brings mass amount of sea lions into a small space and a bunch of dead fish.”

Another method is a longer “soak” of two to four weeks before the fish are taken out to sea fo release, Petrick said. This is done in Pillar Point Harbor, he said.

“It results in a higher density of fish in the harbor area, which could be beneficial in our harbor because of the way we’re set up and the space we have as well as the amount of spawning access the fish have nearby the harbor,” Petrick said. “It really comes down to what the experts think is best.”

In Half Moon Bay, according to Shepherd, about 30-40 percent of the chinook raised in pens there return to the harbor. This results in several thousand fish, making for a huge sport fishery there, he said.

In Crescent City, those fish would swim around the harbor, looking for a stream to spawn in, Shepherd said. This could be problematic if they use Elk Creek, which is used by coho salmon returning to spawn, he said. But there are others the chinook could use.

“All these little creeks — Nickel Creek, Damnation Creek — these fish will be looking for a place and it starts a run of fish in those rivers,” Shepherd said. “It could put seed into those creeks. That just enhances the project even more because you’re bringing fish to rivers that probably traditionally had a run of salmon but no longer do.”

Shepherd said a net pen or two could be the size of one of the boat slips at the harbor. Potential locations include near the boat launch off Anchor Way or at the Coast Guard Station, Shepherd said.

The seasoned commercial fisherman noted that though the juvenile salmon will be protected from predators in the pens, when they return as adults, sea lions will have a heyday.

“That’s not a bad thing either,” he said. “If they’re eating the net pen fish, they’re not eating the native stock out of the Klamath River or the Smith River. Another big plus is you’re putting more fish into the ocean and that predation is going way down because the more fish you have, the more fish the sea lions could eat.”
Shepherd said he wants to be “hands-on” with the project.

The Rowdy Creek Fish Hatchery was a nonprofit organization established in 1968 by the Kiwanis Club of Smith River. The hatchery operates 365 days a year and raises chinook and steelhead for release into the Smith River.