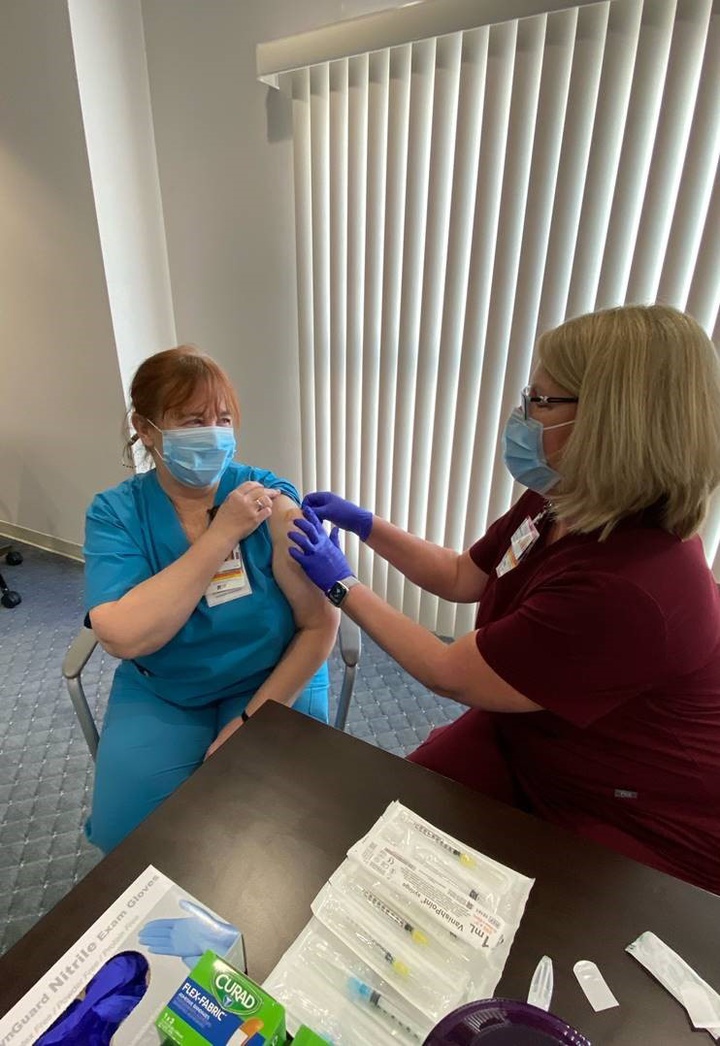 (Updated at 5:49 p.m. with updated COVID-19 stats in Del Norte County and to correct the number of Pelican Bay State Prison inmates with active disease.)

Predicting that Del Norte County may exhaust most of its initial COVID-19 vaccine allotment by the end of the week, its public health officer says rationing the last of its Pfizer doses may be necessary to ensure those who need it get their second shot.

“We’re in kind of a quandary at the moment,” Dr. Warren Rehwaldt told the Wild Rivers Outpost on Tuesday. “At the moment we don’t want to over extend the vaccine distribution without a guarantee that we’ll have second doses. And right now we have our first vaccinnees coming due next week for their second dose of the Pfizer vaccine.”

Del Norte Public Health Branch staff ferried its first doses of the Pfizer vaccine into the county from Humboldt the week of Dec. 21. Staff at Sutter Coast Hospital and residents at Lantern Health Crescent City were the first to receive their shots.

Distributing the Pfizer vaccine has proven to be a challenge for Del Norte County since the vaccine must be stored at minus 70 degrees Celsius.

According to Rehwaldt, some people in the community ordered ultra cold freezers to help store those vaccines. He said those freezers should be up and running in about two weeks.

On Tuesday, Rehwaldt estimated that out of the roughly 650 total vaccine doses, about 200 are left. Public Health staff are currently waiting on the county’s next shipment, hoping it arrives soon to get them out of a potential logistical jam, he said..

“If we get word tomorrow that our second allocation is on its way and nothing has changed, it’s game on,” he said. “Because then we don’t have to worry about that.”

Receiving an emergency use authorization from the U.S. Food and Drug Administration on Dec. 11, the Pfizer-BioNTech COVID-19 vaccine was the first to be distributed in the U.S. and Del Norte, according to the county's information hub.

The FDA issued a second emergency use authorization on Dec. 18 for the Moderna COVID-19 vaccine to be distributed.

Those who received the first vaccine doses include those work in acute care, psychiatric and correctional facility hospitals; dialysis centers, paramedics and emergency medical personnel; as well as those living in skilled nursing and assisted living facilities.

Though the county hasn’t yet got its second vaccine allocation, Public Health staff have already begun considering future categories of people who should get their shots next. One population is people who work in medical offices, Rehwaldt said, as well as in-home support workers and those who care for someone with a disability.

However, Rehwaldt said he really wants to focus on seniors, especially those who have chronic medical conditions and those who are over 75 years old. Del Norte County is home to about 4,000 senior citizens, he said.

“It’s a big task, but we want to get it done as quickly and efficiently as possible,” Rehwaldt said. “Once we do that we can breathe a sigh of relief. We want to immunize the key people who make the immunization and medical system work and the key people who are high risk.”

Another key group Rehwaldt is teachers and support staff at local schools so they can “function in their jobs without fear.”

Del Norte County Unified School District Superintendent Jeff Harris has said that though students and staff have come down with COVID-19, viral transmission has not occurred at local schools.
On Tuesday, Rehwaldt said there hasn’t been a lot of virus activity at local schools, but sharing air and space with a lot of people for a long period of time is a high risk environment.

When what vaccine distribution of the general community may look like, Rehwaldt said people may get the shot either through their primary care physician’s medical office or at a Public Health vaccination clinic. Some groups receiving shots are even able to vaccinate themselves, he said.

Since the Public Health Branch only has three nurses, however, it may have to rely on retired nurses or other volunteers who are able to administer shots to help with doling out the COVID-19 vaccine, Rehwaldt said. To ensure everyone receives their shots, clinics in the evenings and on Saturdays may be necessary, he said.

Another challenge is figuring out a way to guarantee that those who receive their first shot are reminded to come in for a second dose, either three weeks later for the Pfizer vaccine or four weeks for the Moderna vaccine, Rehwaldt said. Flexibility is key to make it work for everybody, he added.

“It is a monumentally huge project — the volume of vaccinations and number of people and timing and the fact that you have to do it twice has never been attempted in the U.S. before,” he said. “The whole country’s going through this.”

According to its latest numbers, six new COVID-19 cases were reported to the Public Health Branch on Tuesday, according to the county's information hub. There are currently 126 active cases in Del Norte County and three people in the hospital.

At Pelican Bay State Prison, 15 inmates are currently positive for COVID-19, according to the California Department of Corrections and Rehabilitation.

There has been a total of 783 confirmed COVID-19 cases in Del Norte County since the start of the pandemic. Two people have died.